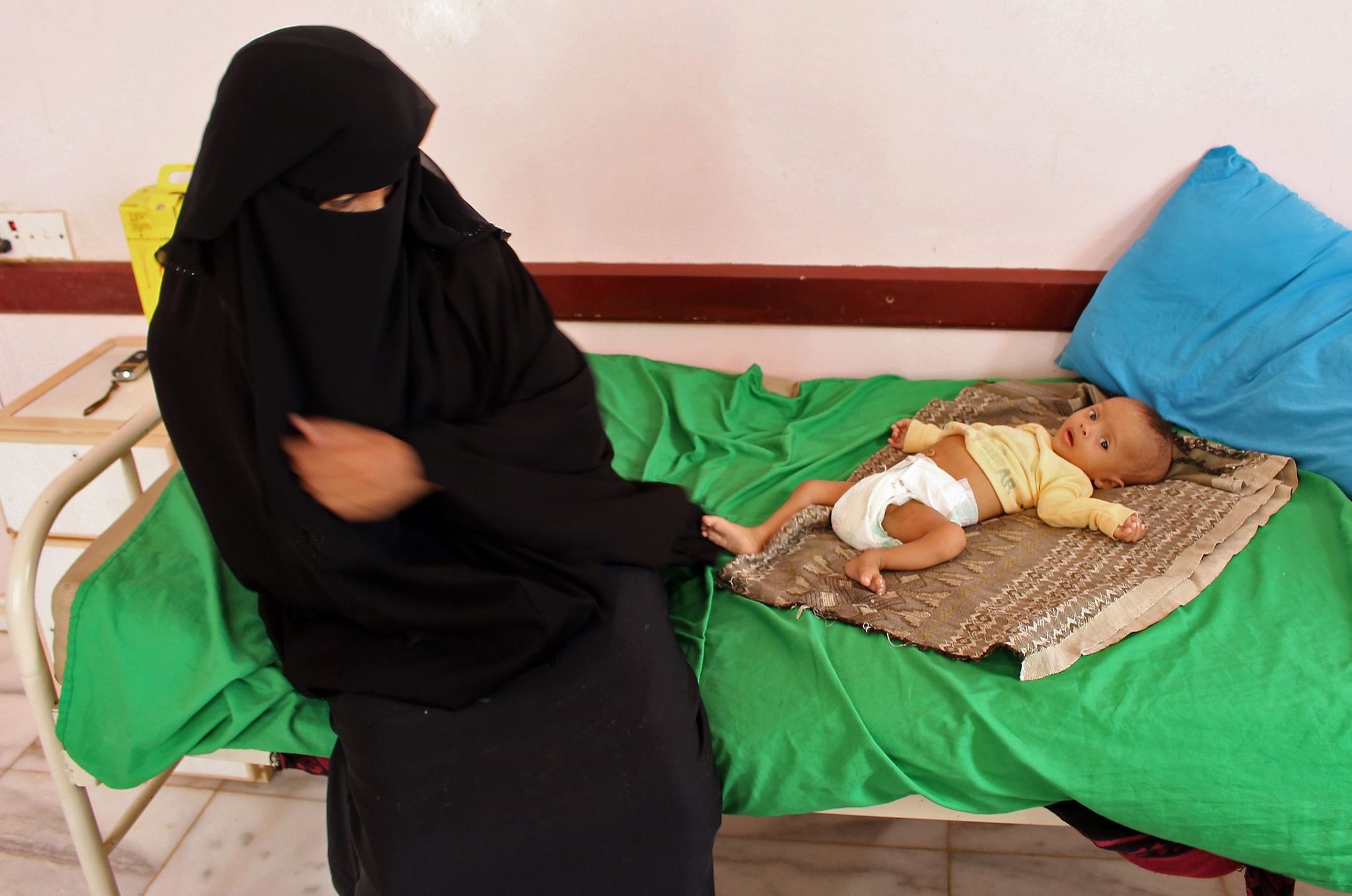 A Yemeni child suffering from severe malnutrition waits for treatment in a hospital in Yemenu2019s northwestern Hajjah province, Nov. 7.
by Compiled from Wire Services Nov 12, 2018 12:00 am

As Saudi-led coalition forces have pressed further into the strategic Yemeni port city of Hodeida, seizing its main hospital in heavy fighting, fears for civilian safety have been increasing with the death toll continuing to rise over the weekend. The intensified coalition-backed push into Hodeida, which has claimed the lives of at least 382 combatants this month, comes despite aid agency warnings of a humanitarian catastrophe in the event of a protracted battle for the city. At least 61 combatants were killed in clashes in Hodeida, medics and a military source said Sunday, and dozens of wounded were taken to hospitals outside the city.

Amid growing anger over civilian casualties from the coalition's airstrikes, the Saudi-led coalition fighting in Yemen said early Saturday it had "requested cessation of inflight refueling" by the U.S. for its fighter jets after American officials said they would stop the operations.

The U.S. has made a call to end the war, but there was no reference to the future of its arms sales to Saudi Arabia. The decision by the U.S. to pull out also comes amid outrage by U.S. lawmakers from both political parties over the Oct. 2 killing of Washington Post columnist Jamal Khashoggi at the Saudi Consulate in Istanbul.

"We support the decision by the Kingdom of Saudi Arabia, after consultations with the U.S. government, to use the coalition's own military capabilities to conduct inflight refueling in support of its operations in Yemen," U.S. Defense Secretary Jim Mattis said in a statement. "The U.S. will also continue working with the coalition and Yemen to minimize civilian casualties and expand urgent humanitarian efforts throughout the country."

It wasn't immediately clear what impact the U.S. withdrawal from air refueling operations would have. American officials earlier said Saudi forces now handled some 80 percent of their refueling operations, which crucially allow aircraft to fly longer sorties over possible targets and can ease the pressure for quick strikes. U.S. officials, speaking on condition of anonymity Friday to discuss the decision before its announcement, said the end of refueling wouldn't stop American training and military assistance.

Yemen has been wracked by conflict since 2014, when Shiite Houthi rebels overran much of the country. Saudi Crown Prince Mohammed bin Salman, the former defense minister, and Saudi Arabia's allies launched Operation Decisive Storm in March 2015. The Saudi and UAE-led war in Yemen has caused growing international unease after high-profile coalition air strikes killed scores of civilians, many of them children. In September, the Saudi-led coalition admitted that mistakes were made in an August airstrike that killed 40 children, an event considered an apparent war crime by the U.N. human rights body.

The battle for Yemen's main Hodeida port has placed the lives of civilians in further danger as they have been struggling to live under the coalition blockade imposed last year. For several weeks at the end of 2017, the Saudi coalition imposed a blockade on Yemeni ports that it said was to prevent Houthis from importing weapons. This had a severe impact on Yemen, which traditionally imports 90 percent of its food.