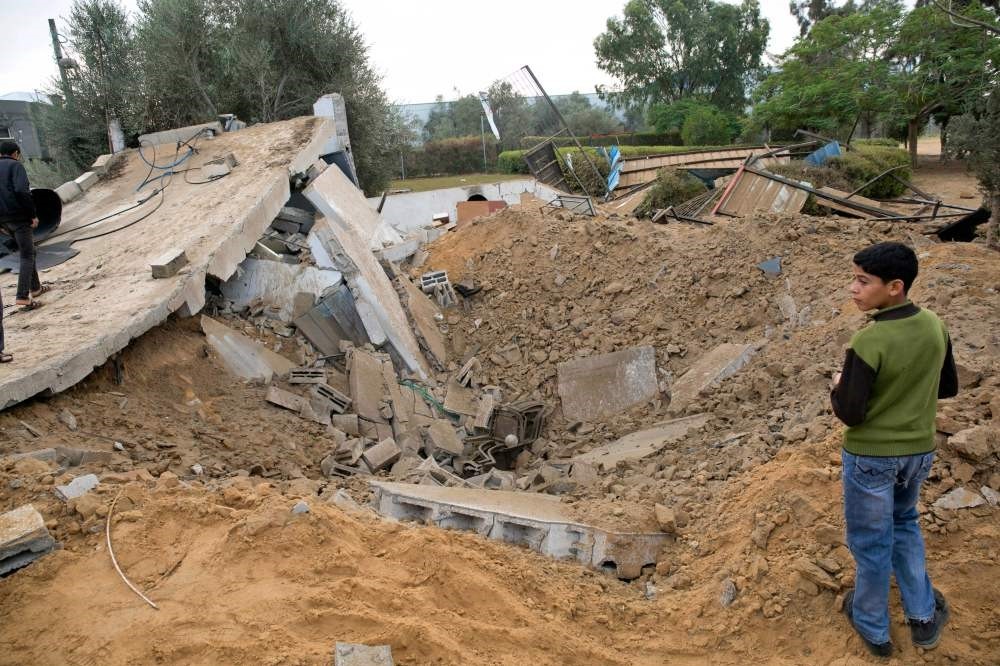 Palestinians stand on the remains of a building that was destroyed following an Israeli airstrike, in Khan Yunis in the southern Gaza Strip, Nov. 12.
by Compiled from Wire Services Nov 13, 2018 12:00 am

Just as Israel and Hamas had appeared to be making progress toward a peace deal, a botched Israeli undercover operation in the Gaza Strip led to fighting that killed a Hamas commander and six other Palestinians.

The Palestinian Health Ministry said six people, including at least five militants, were killed and seven others wounded. In the early hours, a seventh body was found. Hamas said the Israeli actions dealt a blow to Egyptian, Qatari and U.N. efforts to broker a long-term cease-fire between the Palestinian group and Israel and ease an Israeli blockade that has deepened economic hardship in Gaza. There were no reports of injuries or damage in Israel, but the military said a lieutenant-colonel, identified only as "M," had been killed in the raid and another officer wounded.

In an apparent attempt to defuse tensions, Israel's chief military spokesman said the special forces had not been dispatched to assassinate Hamas commanders, a tactic that led to wider conflict in the past and which has largely been abandoned. The spokesman, Brig. Gen. Ronen Manelis, told Army Radio that covert missions were mounted frequently, comments that suggested the Israeli force may have been gathering intelligence. Israeli Prime Minister Benjamin Netanyahu cut short a visit to Paris, where he attended World War I commemorations with other world leaders. He returned home yesterday to deal with the crisis.

Sunday's development shattered what appeared to be a turning point after months of bloodshed along the Israel-Gaza border, with weekly Hamas-led protests drawing thousands to the perimeter fence with Israel. For the last seven months, Palestinians in Gaza have been staging regular demonstrations along the Gaza-Israel buffer zone to demand the right to return to their homes in historical Palestine from which they were driven out in 1948. They also demand an end to Israel's 12-year blockade of the Gaza Strip, which has gutted the coastal enclave's economy and deprived its 2 million inhabitants of many basic commodities.

Since the rallies began, more than 220 Palestinians were killed, and thousands more injured, by Israeli troops deployed along the other side of the buffer zone. Israel has been criticized by a U.N. human rights body for its killing of protesters in Gaza and treatment of the Palestinians, declaring it as a "war crime" under the Statute of Rome. The high casualty toll triggered a diplomatic backlash against Israel and new charges of excessive use of force against unarmed protesters.

With international officials warning of a looming humanitarian crisis, Netanyahu last week allowed the cash into Gaza. It is the first installment of $90 million that Qatar has pledged to cover the salaries of thousands of unpaid Hamas employees for six months. The payment is part of what is expected to be a set of informal understandings between Israel and Hamas reached through Egyptian and U.N. mediation. Hamas is demanding an expansion of the permissible fishing zone off the Israeli-controlled Gaza coast, uninterrupted flow of fuel to mitigate chronic power shortages and the lifting of Israeli restrictions on exports and imports. In return, Israel wants quiet and an end to the border protests.