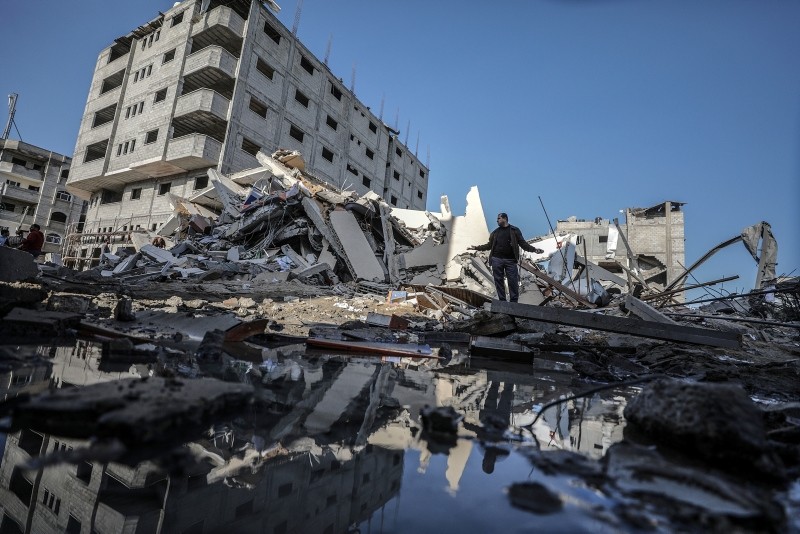 A Palestinian inspects a rubble of a destroyed building of Al-Aqsa channel belonging to Hamas movement after Israeli air strike in Gaza City, Nov. 13, 2018.
by Compiled from Wire Services Nov 13, 2018 12:00 am

Palestinian groups in the Gaza Strip on Tuesday announced an Egyptian-brokered cease-fire with Israel after a severe escalation of violence threatened to descend into full-blown war.

The truce came after nearly two days of heavy shelling that killed at least seven Palestinians in the Gaza Strip in less than 24 hours.

The Palestinian resistance group Hamas said they would abide by the cease-fire as long as Israel did the same.

Israeli Prime Minister Benjamin Netanyahu and the military did not comment, but the Home Front Command removed late Tuesday all limitations on southern residents.

Hardline Defense Minister Avigdor Lieberman, who said Tuesday he did not support stopping the strikes, announced he will be making a statement on Wednesday afternoon.

The latest violence, which saw seven Gazans killed as the Israeli aerial bombardment flattened buildings and sent fireballs and plumes of smoke into the sky, was the worst between Israel and Palestinian militants since a 2014 war.

Israel said it has struck more than 100 targets it says are linked to militants in Gaza, including a strike that destroyed the TV station of the ruling Hamas group.

About 460 rockets and mortar rounds were fired from Gaza aimed at southern Israel. Hamas said it was retaliating for a botched Israeli commando raid in Gaza that killed one of its commanders and six others on Sunday. An Israeli colonel was also killed in that incident.

A Palestinian laborer from the occupied West Bank was killed when a rocket hit a building in the Israeli city of Ashkelon.

In a statement issued late Tuesday, Egypt called on Israel to cease its "military action" in Gaza.

"Egypt's efforts have been able to achieve a cease-fire between the resistance and the Zionist enemy," the Gaza groups said.

The U.N. Security Council met behind closed doors Tuesday to discuss the escalation of violence in the Gaza Strip but there was no agreement on how to address the crisis, diplomats said.

Kuwaiti Ambassador Mansour Al-Otaibi told reporters after the closed consultations late Tuesday that "we were not able to find a solution to the situation in Gaza" because of divisions in the most powerful U.N. body.

Al-Otaibi said that "the majority of member states raised the issue that the council should do something, and one of the issues that has been introduced is that the Security Council should consider going on a visit to the occupied territories."

Council diplomats said Swedish Ambassador Olof Skoog raised the idea of a trip, which was endorsed by Russia and Britain. The diplomats spoke on condition of anonymity because the discussions were private.

Kuwait, which represents Arab countries at the council, and Bolivia requested the meeting.

Addressing reporters after the 50-minute meeting, Palestinian Ambassador Riyad Mansour said the council was "paralyzed" and had "failed to shoulder its responsibility" to take action to end the violence.

"There is one country that is not allowing discussion at the council," Mansour told reporters, in a reference to the United States, which has taken a pro-Israeli stance under President Donald Trump.

There was no statement from the council on the crisis. Such statements are agreed by consensus by all 15 council members.

Israel and Palestinian militants in Gaza have fought three wars since 2008. Violence has simmered since Palestinians launched weekly border protests on March 30 to demand the easing of the blockade on Gaza and rights to lands lost in the 1948 war of Israel's founding.

Israeli troops have killed more than 220 Palestinians during the confrontations, which have included border breaches.