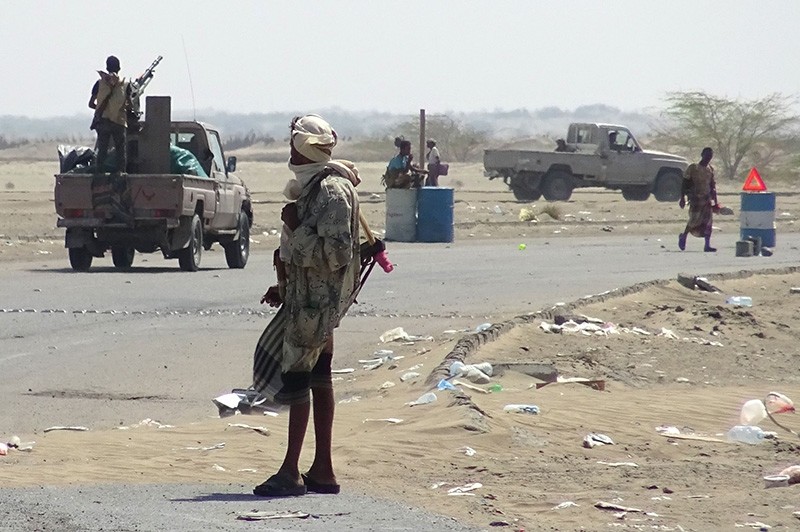 Yemeni pro-government forces gather at a checkpoint in a street on the eastern outskirts of Hodeida as they continue to battle for the control of the city from Houthi rebels on Nov. 13, 2018. (AFP Photo)
by Compiled from Wire Services Nov 19, 2018 12:00 am

A United Nations draft resolution on Yemen presented to the Security Council on Monday calls for an immediate truce in the port city of Hodeida and sets a two-week deadline for the warring sides to remove all barriers to humanitarian aid, according to the draft seen by AFP.

Britain circulated the draft to the 14 other council members after hearing a report on Friday from a U.N. envoy working to arrange peace talks in Sweden to end the nearly four-year war.

Yemen's Houthi movement said Sunday it was halting drone and missile attacks on Saudi Arabia, the United Arab Emirates and their Yemeni allies, in response to a demand from the U.N.

The Saudi-led coalition earlier ordered a halt in its offensive against Yemen's main port city Hodeida, which has become the focus of the war.

International pressure has mounted on Yemen's warring parties to end the war that has killed more than 10,000 people and pushed the country to the verge of starvation.

U.N. special envoy Martin Griffiths is trying to salvage peace talks after a round in September collapsed when the Houthis did not show up. He hopes to convene talks before the end of the year in Sweden to agree a framework for peace under a transitional government.