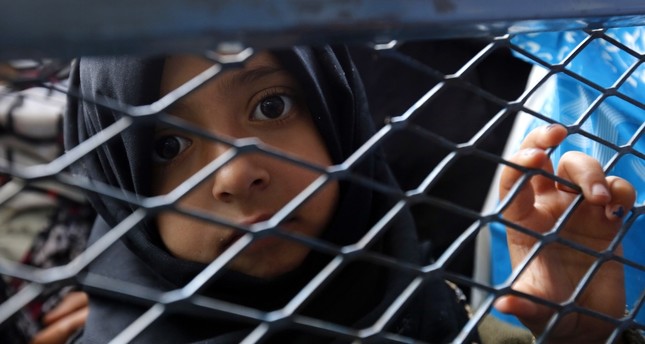 A conflict-affected Yemeni child waits to receive free bread amid a severe shortage of food in Sanaa, Nov. 28.

Amid fears of an all-out Saudi coalition attack in Yemen that leads to grave humanitarian concerns, international efforts have been ramped up by the U.N.

As the humanitarian crisis worsens each day in war-torn Yemen, international efforts to stop the Saudi-led military campaign have ramped up with U.N.-sponsored peace talks expected to start next week. As part of these efforts, Turkey reiterated its calls for progress in attempts to get the warring sides to negotiate a peaceful resolution to the conflict. The United Nations is trying to reconvene talks between the Saudi-backed government led by Abd-Rabbu Mansour Hadi and the Iranian-aligned Houthi group to agree on a framework for peace and a transitional governing body.

A previous round in Geneva collapsed in September when the Houthis failed to show up.

Meanwhile, Turkey has continued to voice concern over the humanitarian situation in Yemen and called for a political solution for peace. Turkish President Recep Tayyip Erdoğan called on Muslim countries to unite in face of regional challenges, like in Yemen, and those aiming to instigate divisions and conflict between them.

The outrage over the killing of journalist Jamal Khashoggi in Saudi Arabia's Consulate in Istanbul has increased scrutiny on Riyadh's role in conflicts in the region, potentially giving Western powers, which provide arms and intelligence to the Saudi-led coalition, greater impetus for action. The U.S. Senate voted to advance a resolution, backed by critics, of President Donald Trump's support for Saudi Arabia that seeks to end U.S. military assistance to the kingdom within 30 days. Britain is a major arms supplier to Saudi Arabia and opposition politicians and human rights groups have called on the government to cease such sales due to the high civilian death toll in air raids by the coalition in Yemen. Germany has moved to halt arms sales to Saudi Arabia over the Khashoggi killing and Denmark has suspended future approvals of weapons and military equipment exports there.

An Argentine judge reviewing a Human Rights Watch complaint against Saudi Crown Prince Mohammed bin Salman (MBS) asked the foreign ministry on Nov. 29 to seek information from Turkey, Yemen and the International Criminal Court. The office of federal judge Ariel Lijo confirmed the request to Reuters just hours after the crown prince landed in Buenos Aires for the G20 summit of industrialized nations. Human Rights Watch had asked Argentina on Nov. 26 to use a war crimes clause in its constitution to investigate any involvement by the crown prince in possible crimes against humanity in Yemen, where Saudi Arabia has launched a military campaign, and the murder of Saudi journalist Jamal Khashoggi.

Yemen has been wracked by conflict since 2014, when the Shiite Houthi rebels overran much of the country. MBS, the former defense minister, and Saudi Arabia's allies launched Operation Decisive Storm in March 2015. Riyadh has accused the Houthi rebel group of serving as a proxy force for Iran, Saudi Arabia's arch foe in the region.

Civilians have borne the brunt of the conflict, which has killed over 10,000 people and sparked the world's worst humanitarian crisis. In September, the Saudi-led coalition admitted that mistakes were made in an August airstrike that killed 40 children, an event considered an apparent war crime by the U.N. human rights body. Saudi Arabia's alleged human rights violations are not limited to that country but have expanded beyond its borders, since there is an endless war in Yemen.

Fighting between Saudi-led coalition forces and Houthis flared up again around the Red Sea port city of Hodeida despite U.N. calls for a cease-fire. The escalation began earlier this month with coalition airstrikes hitting the rebels, undermining the latest U.N. efforts to end the three-year war. The battle over the strategic town has come at a price for Yemeni residents, who had already been suffering from shortages of basic materials, including food and clean water. Early on in the battle, no fewer than 500 people had died, while thousands lived in fear, trapped with no means of escape or a safe place to take refuge. Saudi Arabia remained indifferent to calls from the international community, the increasing humanitarian price of the war and the fact that the battle would remain futile.

Share on Facebook Share on Twitter
Previous in MidEast Lebanon has accepted a Russian aid offer comprising millions of bullets... Next in MidEast A medical aid group said the vast number of Palestinians treated for...
DAILY SABAH RECOMMENDS