US 'can't give Saudi Arabia a pass' on Khashoggi, Haley says, blames crown prince for murder 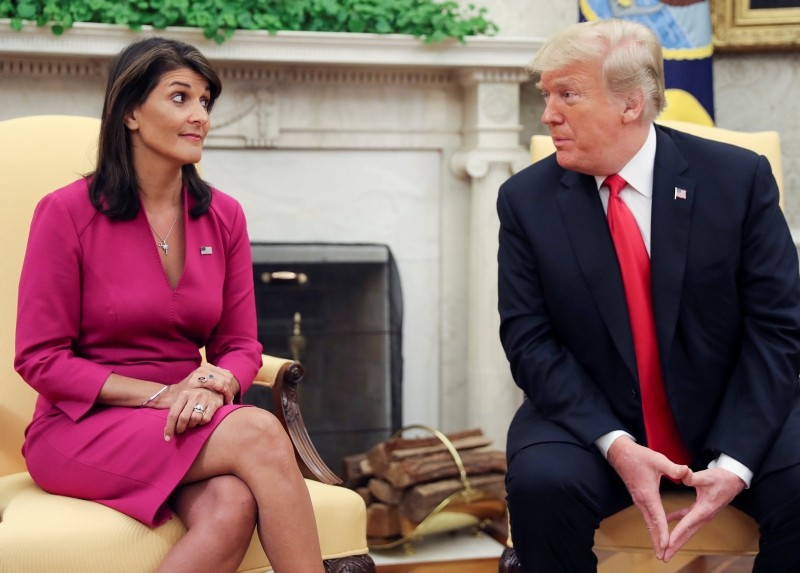 U.S. President Donald Trump talks with U.N. Ambassador Nikki Haley in the Oval Office of the White House after it was announced the president had accepted the Haley's resignation in Washington, U.S., October 9, 2018. (REUTERS Photo)
by Anadolu Agency Dec 12, 2018 12:00 am

Saudi Arabia will not receive a pass for the murder of Jamal Khashoggi, U.S. ambassador to the U.N. Nikki Haley said Wednesday.

"I think we need to have a serious hard talk with the Saudis to let them know we won't condone this, we won't give you a pass, and don't do this again," Haley said in an interview with the morning talk show, Today.

It was the first interview Haley did since she announced she would be leaving her post by year's end.

After initially saying he had left the consulate alive, weeks later the Saudi Arabia admitted he was killed there.

Haley emphasizes Saudi Arabia is an important partner for the U.S. in dealing with Iran, and fighting Houthi insurgents in Yemen, Hezbollah militants in Lebanon and "Iranian proxies" throughout the world.

"I think that the administrations have to talk about where we go from here. What I can tell you that's so important is that the Saudis have been our partner in defeating and dealing with Iran. And that has been hugely important," Haley said.

U.S. President Donald Trump announced State Department spokeswoman Heather Nauert is his choice to replace Haley, who said she would help her get ready for her new post.

"You know, time will tell how this works out, but I can tell you I'm going to support and help in her transition and her ability to move forward and be successful," Haley added.