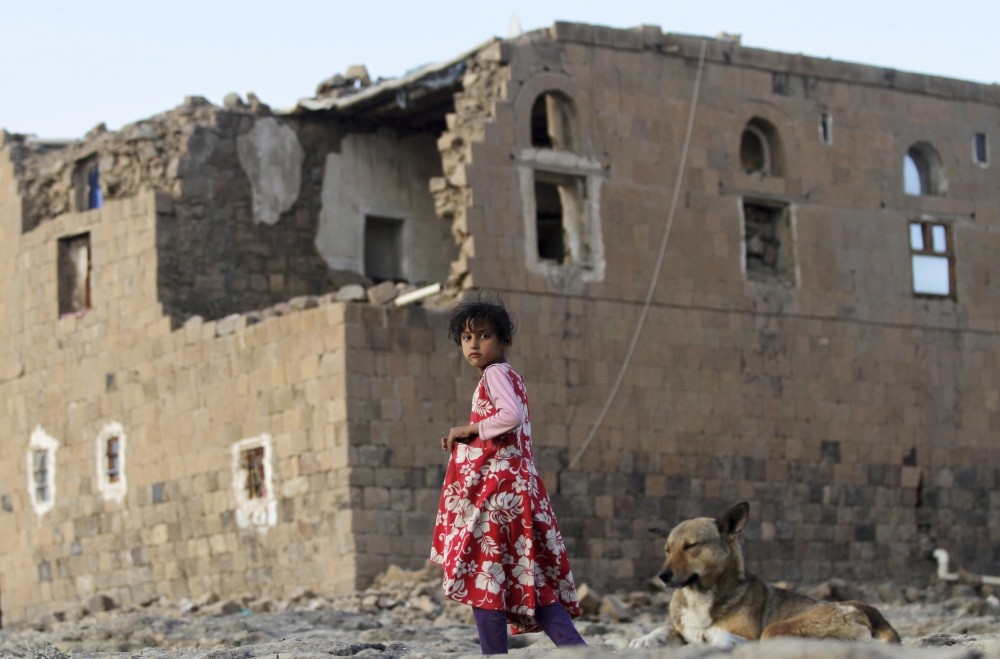 A girl walks by her house in Faj Attan village, which was destroyed in an airstrike carried out by the Saudi-led coalition, Sanaa, Yemen, Dec. 13.
by Yusuf Selman İnanç Dec 19, 2018 12:00 am

The warring parties have reached a cease-fire agreement for the strategic port city of Hodeidah and its adjoining towns. However, minutes after the truce was put into effect new clashes erupted, undermining the hard-won agreement. Moreover, the truce does not offer anything for certain problems in the country. Of prime importance among those problems is the distribution of money as two central banks operate in the country; one is in Aden under the control of the internationally recognized government, while the other one is in Sanaa, controlled by the rebels.

The cease-fire was reached last week in Sweden's capital Stockholm. The meeting was the first direct talk between the warring parties. Following on from the meeting, a cease-fire was declared and a prisoner swap deal is on the cards. "We welcome the announcement of the cease-fire announced by the U.N. envoy this night, which will take effect shortly, and we affirm that peace is the first option since the very first moment," Mohammed Ali al-Houthi, head of the Supreme Revolutionary Committee of the Iranian-backed Houthi militias, said on Twitter. Similarly the internationally recognized government welcomed the truce. Martin Griffiths, the U.N.'s special envoy to Yemen, also said the militants' withdrawal was "expected to start its work swiftly to translate the momentum built up in Sweden into achievements on the ground."

Described by Griffiths as the conflict's "center of gravity," Hodeidah is placed at the center of these talks. Despite the announcement that the warring parties will withdraw their forces from the town, the core issues like food delivery and pipelines, remain unaddressed. For instance, most of the pipelines are controlled by the Houthis while a few of them are still in the hands of the central Yemeni government. The control of the pipelines provides strategic superiority as the country's energy needs are met through them. In addition, and more importantly, these pipelines are used to carry Saudi oil. Therefore, the kingdom does not want the Houthis to be in control of them. To this end, Saudi Arabia even declared its plan for the construction of a new pipeline at the end of last summer. Hodeidah is considered as important as the former issue.

Likewise, the food delivery issue remains unsolved as people suffer from a lack of food in government-controlled areas, whereas people have food but not money in other areas. Food comes from abroad. Moreover, the delivery of aid is another problem. After all, the questions of who will be in charge of these tasks and who will pay the civil servants remain unanswered. The presence of two separate central banks complicates matters further. The Gulf countries may give economic aid, amounting up to $3 billion, yet the distribution of the money is still a contested issue.