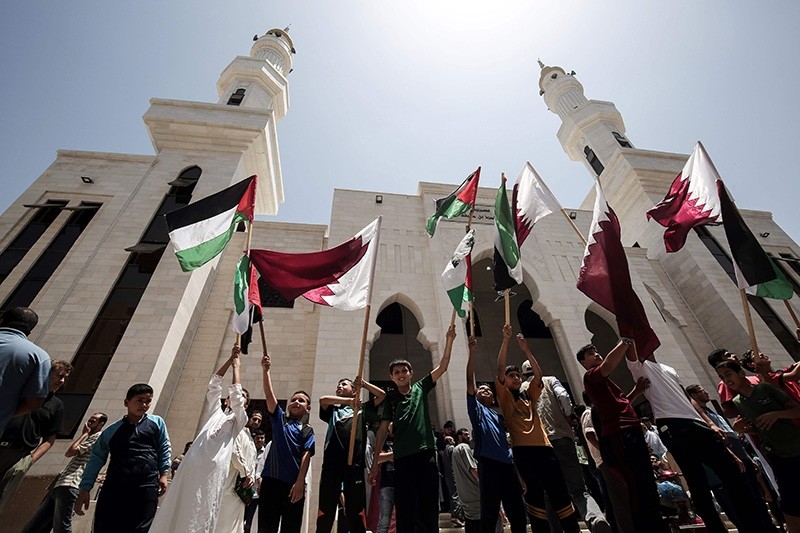 Palestinians attend a rally in support of Qatar at the Qatari-funded housing project in the southern Gaza Strip city of Khan Yunis on June 9, 2017. (AFP Photo)
by Compiled from Wire Services Jan 24, 2019 6:37 pm

Hamas said Thursday they would not accept a fresh tranche of Qatari funds to Gaza, accusing Israel of imposing new conditions on the money entering the blockaded Palestinian territory.

The rejection of the expected $15 million (13.2 million euros) raised fears of fresh tensions along the Gaza-Israel border, ahead of weekly protests on Friday.

"We refuse to receive the third Qatari grant in response to the (Israeli) occupation's behavior and attempts to evade the agreement," Khalil al-Hayya, Hamas's deputy head in Gaza, told journalists.

Al-Hayya did not name specific conditions that were changed, but said Israel was playing politics with the funds ahead of upcoming elections.

Weeks of relative calm in the Gaza Strip ended Tuesday when Israel carried out airstrikes in Gaza that targeted a Hamas post, saying the attacks came after shots were fired at Israeli troops near the Israel-Gaza buffer zone.

On Thursday, however, an Israeli official said that Israel's Security Cabinet had decided to allow the transfer. He spoke on condition of anonymity because he was not authorized to speak to the media.

The decision came a day after Qatari envoy Mohammed El-Amadi traveled to Jerusalem and Gaza in an effort to resolve the crisis.

Israel and Hamas have fought three wars since 2008 and fears of a fourth round remain. However, violence abated in November as a result of an informal truce between the parties.

Under that agreement, Israel has permitted Gulf state Qatar to bring in aid to the strip, including $15 million a month to pay the salaries of Hamas civil servants and provide aid to impoverished residents. The January payment had been expected to enter Gaza Wednesday or Thursday before Netanyahu blocked it.

The delayed payment is the third of six planned tranches, totaling $90 million, in connection with the truce. Israel's permission is required since the cash must be delivered via its territory. The truck that entered Gaza brought the first delivery out of a $60 million fuel donation by Qatar meant to provide the power plant with enough fuel to operate for six months, local sources said, as Israel's long blockade of the Gaza Strip has created chronic shortages in Palestinian health facilities.

Since 2007, the Gaza Strip has suffered under a crippling Israeli and Egyptian blockade that has gutted its economy and deprived its inhabitants of many vital commodities, including food, fuel and medicine. The cash-starved plant has been providing Gazans with only around four hours of electricity daily.