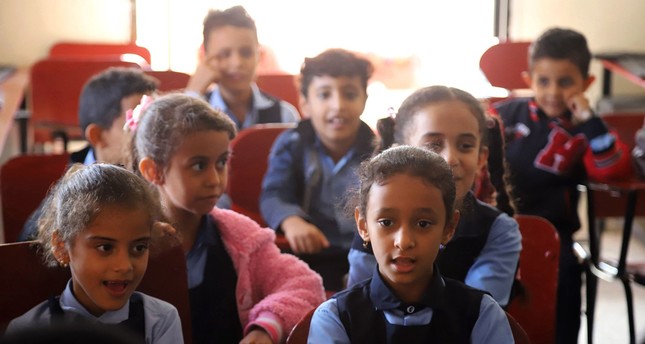 Young Yemenis struggle to continue their education in damaged classrooms, while trying to reprieve from atrocities in a war-torn country which has faced the world's worst humanitarian crisis

As many children in Yemen have suffered from the years-long war, music therapy in damaged schools is being used to support those who have experienced trauma. In the humble classrooms of Al-Nawras, dozens of boys and girls find daily, albeit temporary, reprieve from atrocities in a country the U.N. says is home to the world's worst humanitarian crisis. The three-storey Al-Nawras school was hit in 2015-2016, right after Saudi Arabia and its allies joined the government's fight against the Houthis. When it reopened its doors, walls still pockmarked with bullet holes, educators decided to expand the music program, making it part of the core curriculum alongside maths and Arabic, with the hope that it would restore joy to their students' days. Around two million Yemeni children are missing out on school, with half a million dropping out since 2015, according to U.N. figures published last March.

"The psychological state of the students was very difficult when we reopened here, after all the shelling and bombing and fighting," said principal Shehabeddine al-Sharabi. The head of a university in neighboring Mokha recommended music, loaning instruments to Al-Nawras free of charge.

"Music is not an extra-curricular activity here. We can see how it impacts our students, how they are more responsive through music. It yields purely positive revenue," Sharabi said.

Taez, a city in the southwestern Yemeni highlands, was once known for its coffee beans, grown at high altitude and exported through the famed port of Mokha. Today, the city has been home to some of the most intense fighting.

The Iranian-aligned Houthis and the Saudi-backed government agreed on a cease-fire to withdraw forces at peace talks in Sweden in December following months of diplomacy. But its implementation has stalled, as the agreement did not spell out who would control Hodeidah city after the troop withdrawal. Fighting has largely abated in Hodeida, but progress on the withdrawal has been slow. Hodeidah is of strategic importance because of its port, which is the entry point for some 80 percent of Yemen's imports and aid. In June, a Saudi-led coalition supporting the Yemeni government began a major offensive to seize Hodeidah, which has been under the control of rebels since Oct. 2014, a month after the Houthis overran the capital Sanaa.

Share on Facebook Share on Twitter
Previous in MidEast Palestine's President Mahmoud Abbas has decided to shake up his government,... Next in MidEast The head of the Hezbollah group in Lebanon warned Israel over its...
DAILY SABAH RECOMMENDS