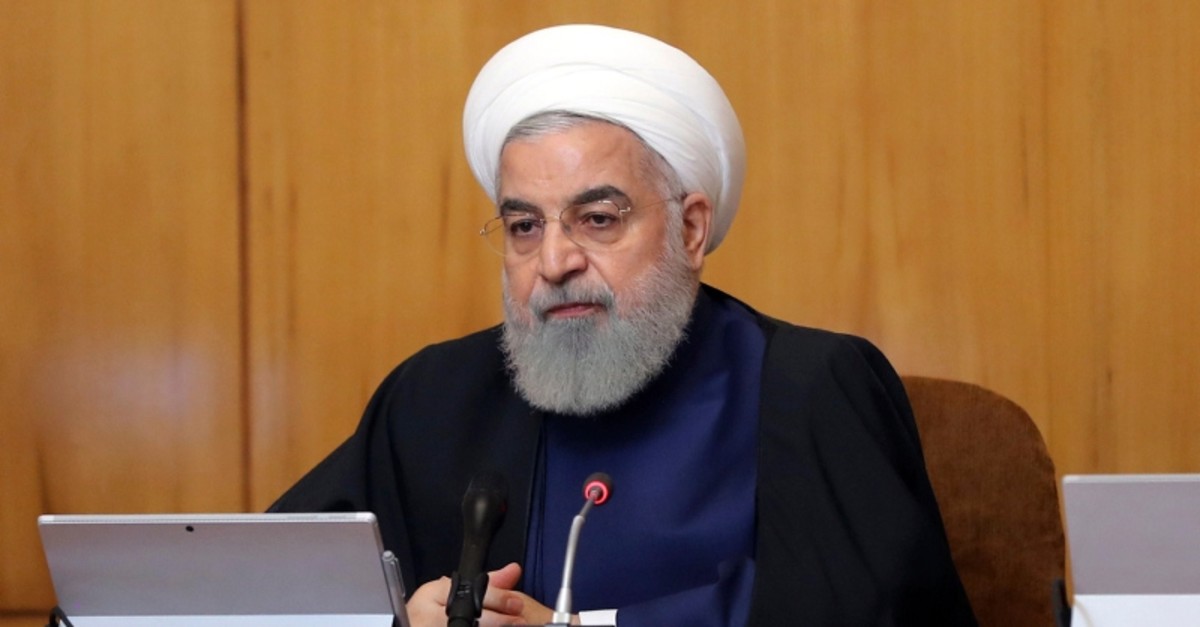 In this photo released by the official website of the office of the Iranian Presidency, President Hassan Rouhani heads a cabinet meeting in Tehran, Iran, Wednesday, May 8, 2019. (Iranian Presidency Office via AP)
by Compiled from Wire Services May 08, 2019 10:17 am

Iran's president said Wednesday that it will stop exporting excess uranium and heavy water from its nuclear program as stipulated by the 2015 atomic accord and set a 60-day deadline for new terms to the deal before it will resume higher uranium enrichment.

Hassan Rouhani's address to the nation came on the anniversary of President Donald Trump's decision to withdraw the U.S. from the landmark agreement. Rouhani said Iran wanted to negotiate new terms with remaining partners in the deal, but acknowledged that the situation was dire.

"We felt that the nuclear deal needs a surgery and the painkiller pills of the last year have been ineffective," Rouhani said. "This surgery is for saving the deal, not destroying it."

The 2015 deal saw sanctions on Iran lifted in exchange for limits on its nuclear program. After the U.S. withdrew from the accord it restored crippling sanctions on Iran, exacerbating a severe economic crisis.

Iran sent letters Wednesday on its decision to the leaders of Britain, China, the European Union, France and Germany via their ambassadors in Tehran. All were signatories to the nuclear deal and continue to support it. A letter also was given to Russia. Iranian Foreign Minister Mohammad Javad Zarif was to meet Wednesday in Moscow with his Russian counterpart.

"If the five countries join negotiations and help Iran to reach its benefits in the field of oil and banking, Iran will return to its commitments according to the nuclear deal," Rouhani said.

However, Rouhani warned of a "strong reaction" if European leaders instead sought to impose more sanctions on Iran via the U.N. Security Council. He did not elaborate.

France said Wednesday it wanted to keep the Iran 2015 nuclear deal alive, but warned Tehran that if it were to not keep to its commitments then the question of triggering a mechanism that could lead to sanctions would be on the table. Defense Minister Florence Parly told BFM TV/RMC radio that the agreement to control Iran's nuclear activities had been undermined for several months.

"Today nothing would be worse than Iran, itself, leaving this agreement," she said.

She said that France, Britain and Germany, the European signatories to the deal, were doing all they could to keep it alive by putting together initiatives to help Iran's economy despite tough U.S. sanctions.

However, she warned that there would be consequences and possibly sanctions if Iran breached the deal.

"This is probably one of the things that will be examined. There are no sanctions today from Europe because Iran has so far always respected the commitments it has taken," she said.

"If these commitments were not respected, naturally this question would be asked."

Zarif separately issued his own warning from Moscow.

"After a year of patience, Iran stops measures that (the) US has made impossible to continue," he wrote on Twitter. World powers have "a narrowing window to reverse this."

Rouhani also said that if the 60 days pass without action, Iran will halt a Chinese-led effort to redesign its Arak heavy water nuclear reactor. Such reactors produce plutonium that can be used in nuclear weapons.

China's foreign ministry said on Wednesday the 2015 Iran nuclear agreement should be fully implemented and all sides have a responsibility to ensure it happens.

Foreign ministry spokesman Geng Shuang made the remarks during a daily briefing.

There was no immediate response from the U.S. However, the White House said Sunday it would dispatch an aircraft carrier and a bomber wing to the Persian Gulf over what it described as a new threat from Iran.

U.S. Secretary of State Mike Pompeo visited Britain on Wednesday to pitch a post-Brexit "special relationship" and the talks expected to cover Iran. Pompeo arrived in London after an unannounced visit to Iraq where he explained U.S. security concerns amid rising Iranian activity.

The U.S. military said on Tuesday B-52 bombers would be part of additional forces being sent to the Middle East to counter what the administration of U.S. President Donald Trump says are "clear indications" of threats from Iran to U.S. forces there.

"The message that we've sent to the Iranians, I hope, puts us in a position where we can deter and the Iranians will think twice about attacking American interests," Pompeo said, noting that U.S. intelligence was "very specific" about "attacks that were imminent."

In London, Pompeo will meet Prime Minister Theresa May who is grappling with a three-year political crisis over the United Kingdom's exit from the European Union. He will also meet Foreign Secretary Jeremy Hunt. As Britain tries to extract itself from the EU after 46 years of membership, a divorce many diplomats say has already made Britain weaker, Pompeo will give a speech on the so called special relationship with the United Kingdom. Both Brexit and the sometimes unpredictable Trump presidency have strained relations between the world's preeminent power and the United Kingdom, its main European ally. Trump is due to make a state visit to the United Kingdom in June.

Iran reached the deal with world powers in 2015. Western governments had long feared Iran's atomic program could allow it to build nuclear weapons. Iran has always maintained its program is for peaceful purposes.

The U.S. last week ended deals allowing Iran to exchange its enriched uranium for unrefined yellowcake uranium with Russia, as well as it being able to sell its heavy water to Oman. The U.S. also has ended waivers for nations buying Iranian crude oil, a key source of revenue for Iran's government.

Currently, the accord limits Iran to enriching uranium to 3.67%, which can fuel a commercial nuclear power plant. Weapons-grade uranium needs to be enriched to around 90%. However, once a country enriches uranium to around 20%, scientists say the time needed to reach 90% is halved. Iran has previously enriched to 20%.