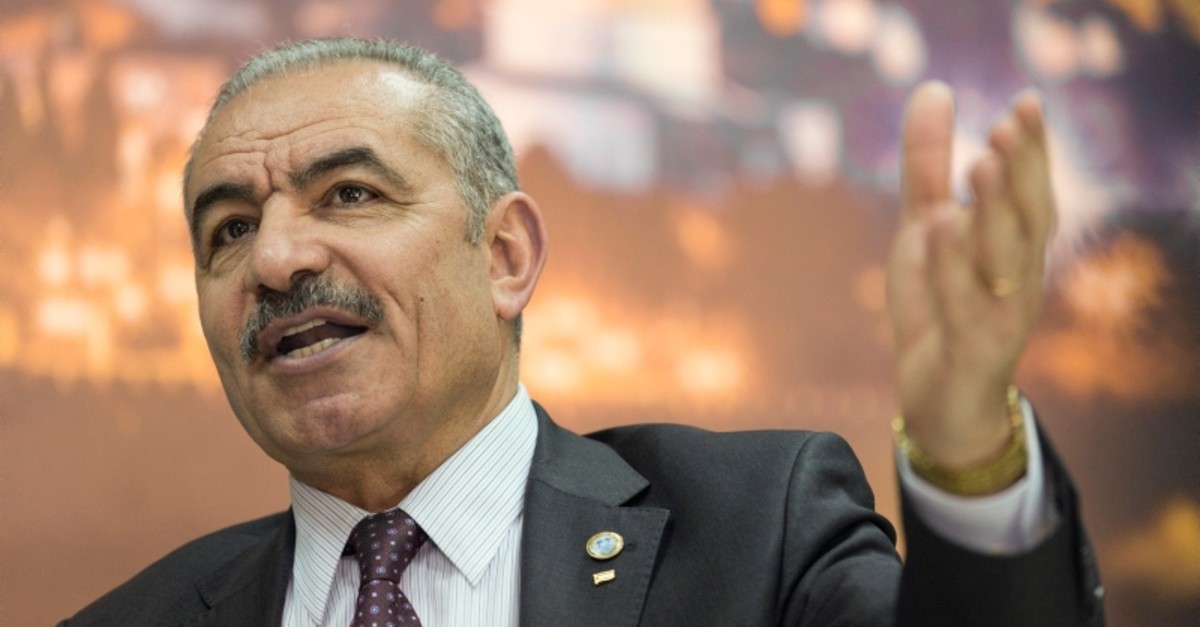 In this April 16, 2019 file photo, Palestinian Prime Minister Mohammad Shtayyeh gives an interview with The Associated Press, at his office in the West Bank city of Ramallah. (AP Photo)
by Associated Press
May 20, 2019 10:25 pm

The Palestinian prime minister said Monday that any American peace plan that ignores the Palestinian people's aspirations for an independent state is doomed to fail.

The White House announced Sunday it will unveil the first phase of its long-awaited Mideast peace plan at the conference, saying it will focus on economic benefits that could be reaped if the Israeli-Palestinian conflict is resolved.

The plan envisions large-scale investment and infrastructure work, much of it funded by wealthy Arab countries, in the Palestinian territories.

But officials say the June 25-26 conference will not include the core political issues of the conflict: final borders, the status of Jerusalem, the fate of Palestinian refugees or Israeli security demands.

"Any solution to the conflict in Palestine must be political ... and based on ending the occupation," Shtayyeh said at a Palestinian Cabinet meeting. "The current financial crisis is a result of a financial war waged against us and we will not succumb to blackmailing and extortion and will not trade our national rights for money."

U.S. President Donald Trump's Mideast envoy, Jason Greenblatt, said it was "difficult to understand why the Palestinian Authority would reject a workshop designed to discuss a vision with the potential to radically transform lives and put people on a path toward a brighter future."

In another setback, Bashar Masri, a Palestinian industrialist with vast business holdings throughout the West Bank, said he had turned down an invitation to the conference.

"I will not participate in this conference, and none of the representatives of our companies will participate," he wrote on Facebook. "We reaffirm our clear position: We will not deal with any event outside the Palestinian national consensus."

The Palestinians severed ties with the U.S. over a year ago over Trump's recognition of Jerusalem as Israel's capital. They have repeatedly expressed fears that the White House will try to buy them off with large sums of investment in exchange for freezing their demands for an independent state. They believe the U.S. is trying to rally support from other Arab countries to bully them into accepting a plan that would legitimize the Israeli occupation.

In a joint statement with Bahrain, the White House said the gathering will give government, civil and business leaders a chance to rally support for economic initiatives that could be possible with a peace agreement.

"The Palestinian people, along with all people in the Middle East, deserve a future with dignity and the opportunity to better their lives," Trump's senior adviser and son-in-law, Jared Kushner, said in a statement Sunday.

"Economic progress can only be achieved with a solid economic vision and if the core political issues are resolved."

The tiny island nation of Bahrain, off the coast of Saudi Arabia, has signaled its willingness to open relations with Israel. Prominent rabbis in 2017 said King Hamad bin Isa Al Khalifa told them he hoped the Arab boycott of Israel would end.

Bahrain hosts the U.S. Navy's Fifth Fleet and is a close ally of Saudi Arabia and the United Arab Emirates, which are widely believed to be seeking closer ties to Israel, viewing it as a potential ally against Iran, a shared enemy.

Kushner and Greenblatt, have been leading efforts to draft the plan, but after more than two years of work, they have not released any details.

A senior administration official in Washington told reporters Sunday that invitations to the conference are being sent to individuals in the United States, Europe, the Gulf, the wider Arab world and "some" Palestinian business leaders.

The official spoke on condition of anonymity pending a formal announcement.

There were no details on who might attend, or whether the internationally-backed Palestinian Authority in the West Bank was invited. Israel's Finance Ministry said it had not been invited.

In the absence of direct talks with Palestinian leaders, U.S. officials often talk of engaging Palestinians in the private sector and "civil society" groups.

Trump's ambassador to Israel, David Friedman, has embraced the "Judea and Samaria Chamber of Commerce," a group led by Israeli West Bank settlers that seeks business ties with Palestinian partners. The group's Palestinian co-founder, businessman Ashraf Jabari, said he had been invited and planned on attending.

It is unclear how any large-scale projects would be carried out in the Gaza Strip. The U.S. and Israel consider Palestinian resistance movement Hamas, which governs Gaza, to be a terrorist group and have no direct contacts with them.

The Palestinians seek the West Bank, east Jerusalem and Gaza — territories captured by Israel in the 1967 Mideast war — for an independent state. Breaking from the policies of its predecessors, the Trump administration has refused to endorse a two-state solution.

Trump recognized contested Jerusalem as Israel's capital in December 2017 and subsequently moved the U.S. Embassy from Tel Aviv to Jerusalem. The U.S. has also cut hundreds of millions of dollars of aid for the Palestinians and closed the Palestinian diplomatic office in Washington.

The Palestinians have already said they would reject any peace plan offered by the U.S., saying Trump is unfairly biased toward Israel.

Kushner said it has been disheartening that the Palestinian leadership has attacked the plan before it's unveiled.

Earlier this month, Kushner insisted that the plan he's helped craft is a detailed, fresh approach that he hopes will stimulate discussion and lead to a breakthrough in solving the decades-old conflict. At a think tank in Washington, Kushner described it as an "in-depth operational document" not anchored to previous, failed negotiations, high-level political concepts or stale arguments.