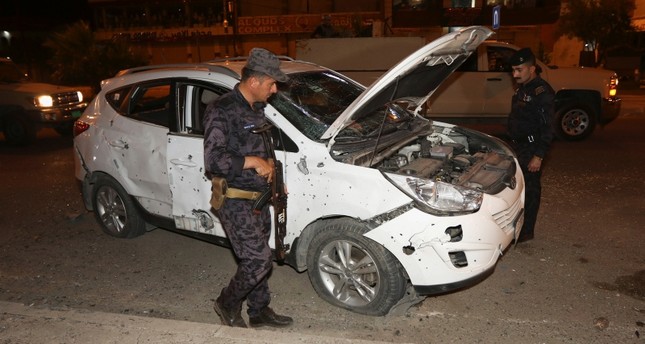 Iraqi security forces inspect the site of a bomb attack in Kirkuk, Iraq May 31, 2019. (Reuters Photo)

Iraqi security officials said a series of explosions in the northern city of Kirkuk has killed at least four people and wounded 23.

The officials said the six blasts went off in quick succession Thursday night after iftar, the meal that breaks daylong fasting during the Muslim holy month of Ramadan. They struck the center of the city when streets are typically crowded.

The nature of the blasts was not immediately clear, but the officials said they appeared to be improvised explosive devices. The officials spoke on condition of anonymity in line with regulations.

Turkey on Friday condemned the terrorist attacks, offering condolences to the "friendly and brotherly people of Iraq."

"We have received the news with sorrow that there were casualties and injuries due to terrorist attacks perpetrated in Kirkuk yesterday (30 May)," Foreign Ministry said in a written statement.

"We strongly condemn these heinous terror attacks that target the culture of peaceful coexistence among different ethnic and religious communities," the statement said.

It also expressed sorrow for the people who lost their lives and hoped for a speedy recovery for the injured.

"We fully believe that such heinous attacks cannot undermine the will of the people of Kirkuk towards living together in peace, harmony and security and contributing to Iraq's prosperity and tranquility," it added.

Iraq declared victory against the Daesh terrorist group in 2017, but the group continues to carry out attacks through sleeper cells, particularly in the country's north.

Share on Facebook Share on Twitter
Previous in MidEast Qatar's prime minister will attend talks in Saudi Arabia over soaring... Next in MidEast A Saudi cargo ship has left the southern French port of Fos-sur-Mer...
DAILY SABAH RECOMMENDS