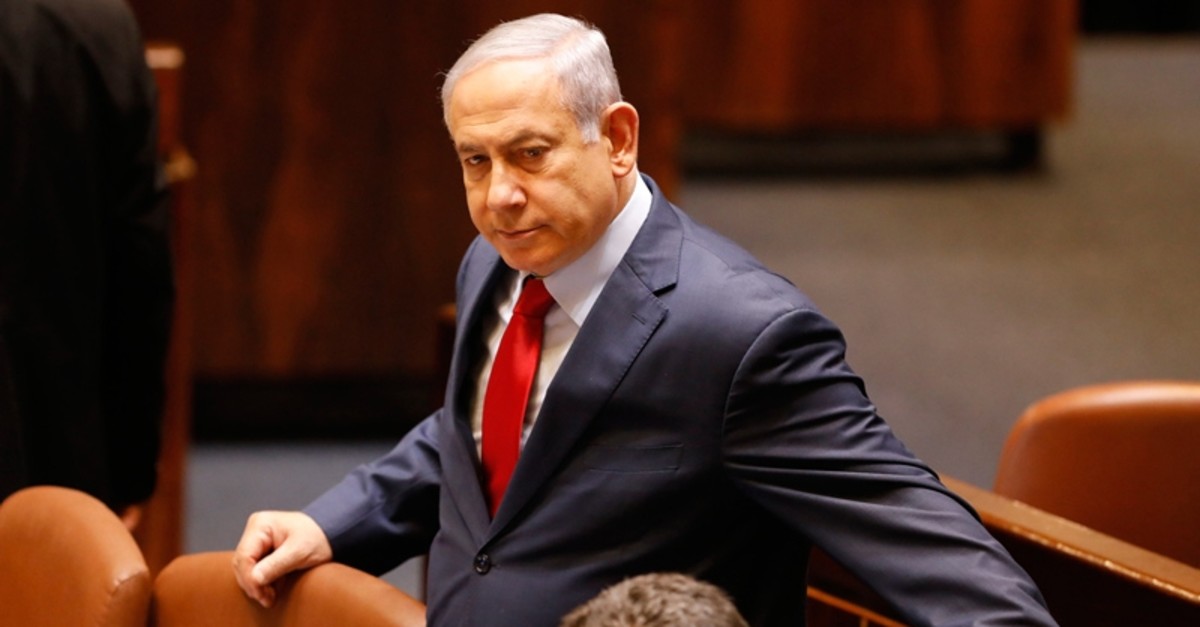 Israeli Prime Minister Benjamin Netanyahu before voting in the Knesset, Israel's parliament in Jerusalem, Wednesday, May 29, 2019. (AP Photo)
by Daily Sabah with Agencies May 30, 2019 12:17 am

For the first time ever, Israel will repeat an election in September after Israeli Prime Minister Benjamin Netanyahu failed to reach a coalition deal, denting his reputation

Israeli Prime Minister Benjamin Netanyahu was confronted with one of the biggest defeats of his political career after failing to form a coalition and opting instead to hold a second election. Netanyahu will now seek to remain in power through a new election while facing possible indictment for corruption in the months ahead.

In what seemed an improbable scenario just days ago, Israel's newly elected Knesset dissolved itself in an early morning 74-45 vote and set a new election date for Sept. 17.

The vote prevented Netanyahu's nightmare scenario of Israeli President Reuven Rivlin naming someone else to try to form a government, but also sent the country into what is likely to be another divisive and costly election campaign.

In office for a decade, Netanyahu won a record fifth term in the April 9 polls after his right-wing Likud party won 36 seats in the Knesset. However, Netanyahu was unable to convince ex-Defense Minister Avigdor Lieberman to abandon a key demand and join the government, despite the results giving his Likud party and its right-wing and religious allies a majority in parliament. Negotiations have broken down over legislation aimed at seeing ultra-Orthodox Jews perform mandatory military service like other Jewish Israelis. Netanyahu's Likud party excoriated Lieberman, accusing him of betraying voters, abandoning his right-wing ideology and selfishly carrying out a personal vendetta against his former patron Netanyahu. Lieberman, a former top aide to Netanyahu who for two decades has alternated between a close alliance and bitter rivalry with his former boss, delivered his own rebuke Thursday. A former defense minister and foreign minister under Netanyahu, he appeared to break with him for good by alleging that Likud Party members were blind Netanyahu followers who needed professional help.

In a separate issue that sparked the extraordinary crisis, Netanyahu is facing possible indictment for bribery, fraud and breach of trust in the months ahead and is reportedly seeking legislation in the new parliament that would result in him being granted immunity. In February, Israeli Attorney General Avichai Mandelblit said he was considering charging Netanyahu on corruption and bribery in three different cases. Israel's Supreme Court will determine whether Netanyahu must resign.

Assuming they would sweep into power again, Netanyahu's allies in the ruling Likud had already begun drafting a contentious bill aimed at granting him immunity from the various corruption charges awaiting him. He was also looking to push legislation limiting the power of the Supreme Court and paving his path to several more years in office.

The new election gives the anti-Netanyahu forces in Israel, led by Blue and White leader Benny Gantz, another shot at toppling the longtime leader. It also complicates Netanyahu's efforts to pass the proposed bills to protect himself from prosecution. Even if Netanyahu wins the election, it is unlikely he will be able to form a government and lock down the required political support for an immunity deal before an expected indictment. That would force him to stand trial, and in turn put heavy pressure on him to step aside.

The political uncertainty could spell trouble for the White House's Mideast peace efforts. The U.S. has scheduled a conference next month in Bahrain to unveil what it says is the first phase of its contentious peace plan. The Trump administration had vowed to unveil its plan after the Israeli election and it's unclear how the current political shakeup will affect that roll-out.