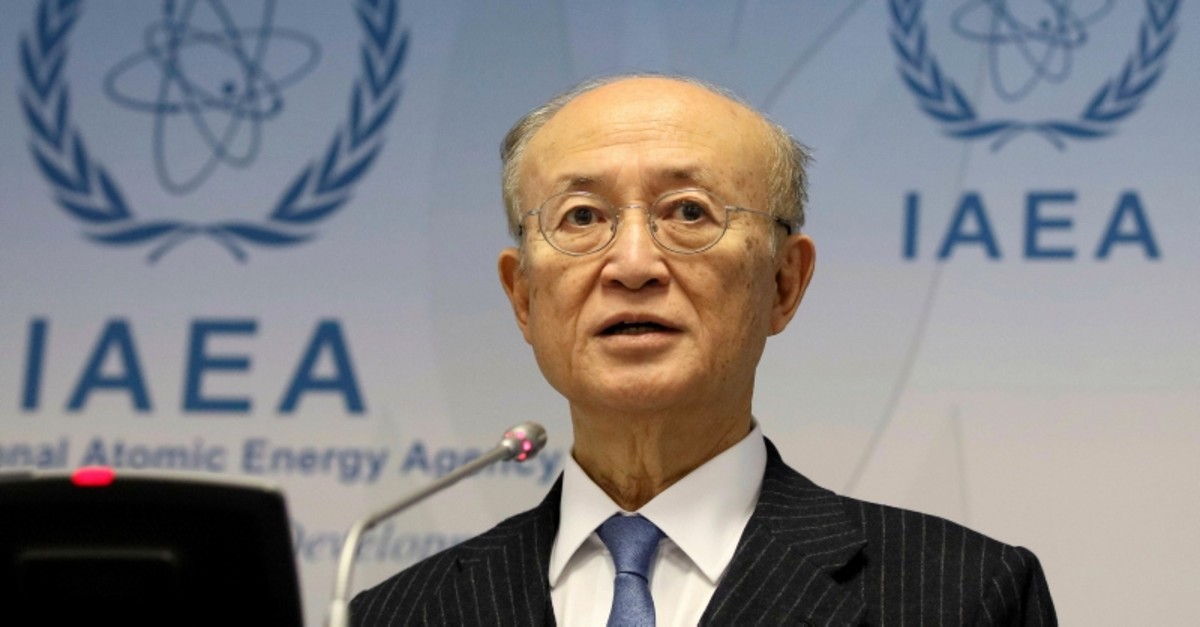 In this Nov. 22, 2018, file photo, Director General of IAEA Yukiya Amano addresses the media during a news conference after a meeting in Vienna, Austria. (AP Photo)
by Compiled from Wire Services
Jun 10, 2019 5:00 pm

The head of the U.N. atomic watchdog is urging world powers to continue dialogue with Iran to keep it in the landmark 2015 deal aimed at preventing the country from building nuclear weapons.

In his regular update to the International Atomic Energy Agency's board of governors on Monday, Yukiya Amano said he's "worried about increasing tensions over the Iran nuclear issue," adding it's "essential that Iran fully implements its nuclear-related commitments."

In its May report to member states, the IAEA said Iran has stayed within key limitations for uranium and heavy water stockpile, but said stockpiles were increasing.

The nuclear deal has been complicated by the unilateral withdrawal of the United States last year and Washington's increased sanctions, which has been taking a toll on the Iranian economy.

Washington's European allies opposed its decision last year to abandon the nuclear deal. They have promised to help Iran find other ways to trade, though with no success so far. All major European companies that had announced plans to invest in Iran have since called them off for fear of U.S. punishment.

Iran says the Europeans have not done enough to provide it with alternative ways to trade. Maas acknowledged limits to how much help the European countries can provide.

"We want to fulfil our obligations," Maas said during his joint news conference with Zarif. "We cannot work miracles, but we will try to avert a failure" of the nuclear deal.

Iranian Foreign Ministry spokesman Abbas Mousavi said: "So far, we have not seen practical and tangible steps from the Europeans to guarantee Iran's interests."

France, Britain and Germany have set up a special-purpose vehicle called Instex, designed to allow payments to Iran that would legally bypass sanctions. It has yet to be launched.

"This is an instrument of a new kind, so it's not straightforward to operationalise it," Maas told reporters. "But all the formal requirements are in place now, and so I'm assuming we'll be ready to use it in the foreseeable future."

Washington has denounced the European plans. Diplomats say the system is unlikely to have much impact on commercial trade with Iran but could be used for humanitarian transactions that are permitted under U.S. sanctions.

Washington says the nuclear deal should be expanded to cover other issues including Iran's missile programme and its role in wars in the region. European countries say they share those concerns, although they argue that it would be harder to address them without the nuclear deal in place.

Iran strongly opposes any effort to expand negotiations to cover other issues. Mousavi said as much: "The EU is not in a position to question Iran's issues beyond the nuclear deal."

On Monday, Germany's Foreign Minister Heiko Maas became the most senior Western official to visit Iran since the new war of words erupted last month between Washington and Tehran.

"The situation in the region here is highly explosive and extremely serious," Maas told a news conference alongside Iran's Foreign Minister Mohammad Javad Zarif. "A dangerous escalation of existing tensions can also lead to a military escalation."

Zarif blamed the United States for the escalation.

"Reducing tension is only possible through stopping the economic war by America," he said. "Those who wage such wars cannot expect to remain safe."

Zarif said talks with Maas were "frank and serious". But he added: "Tehran will cooperate with EU signatories of the deal to save it."