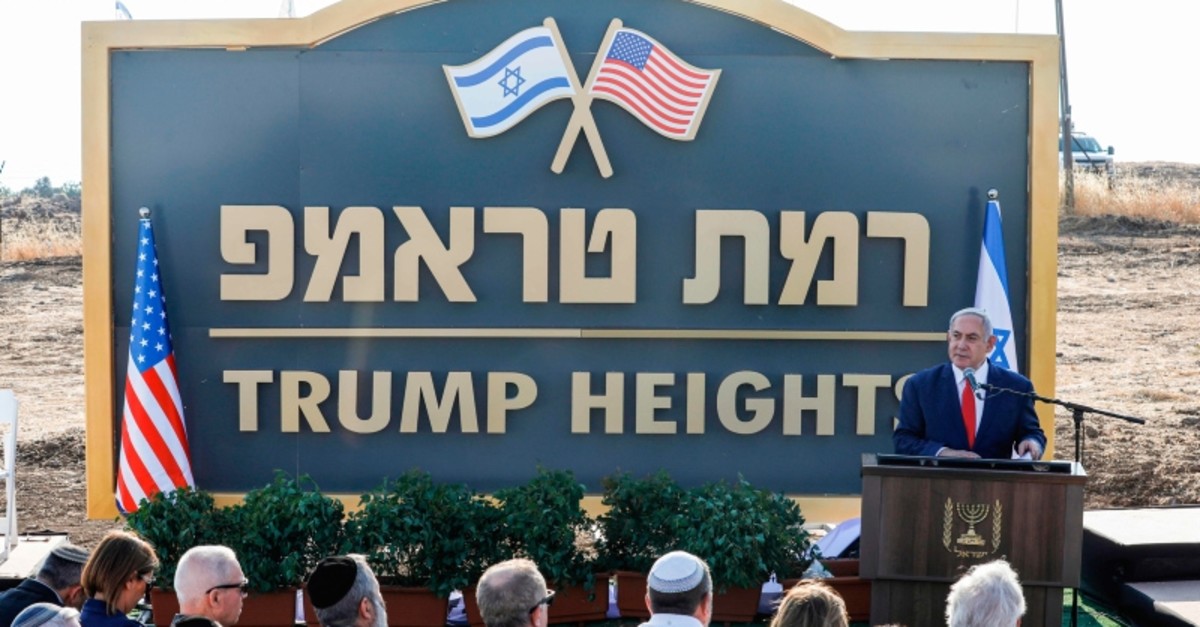 Israeli PM Benjamin Netanyahu gives a speech before the newly-unveiled sign for the new settlement of ,Trump Heights,u201d named after U.S. President Donald Trump, during an official ceremony in the Israeli-annexed Golan Heights on June 16, 2019. (AFP)
by Daily Sabah with Wires Jun 16, 2019 6:37 pm

In a special Cabinet session in Beruchim, a sparse clutch of homes just 12 kilometers from the Golan Heights armistice line with Syria, Netanyahu unveiled a sign labeled "Trump Heights" in English and Hebrew while calling the day "historic." The sign was decorated with Israeli and U.S. flags and planted on a patch of synthetic grass. Addressing the ceremony, Netanyahu called Trump a "great friend" of Israel and described Golan, which overlooks northern Israel, as an important strategic asset.

With Netanyahu running for re-election in the second national election this year, the April elections showed a new weakness in a leader who has been in power for the past decade and who has become the face of Israel for many. Netanyahu's center-left rivals ridiculed Sunday's ceremony. "Whoever reads the small print on the 'historic' resolution understands that it is a dummy-resolution," tweeted Zvi Hauser, an ex-Netanyahu Cabinet secretary now with an opposition party.

Israel captured Golan Heights from Syria in the 1967 Mideast war and annexed it in 1981. Syria has demanded a return of the strategic territory, which overlooks northern Israel, as part of any peace deal. After the devastating civil war in Syria, the prospects of peace talks with Israel anytime soon seem extremely low.

Most of the international community considers the move illegal under international law. But during a visit to Washington by Netanyahu in March, just weeks before Israeli elections, Trump signed an executive order recognizing the strategic mountainous plateau as Israeli territory. The decision, the latest in a series of diplomatic moves benefiting Israel, was widely applauded in Israel.

The recognition of the Israeli claim on Golan Heights is not the first gift that Trump gave to Netanyahu. Trump has shifted U.S. policy sharply in Israel's favor since taking office while breaking with longstanding international consensus. As part of generous support for Netanyahu, the Trump administration first moved the U.S. Embassy from Tel Aviv to Jerusalem, which is internationally recognized as under Israeli occupation. Moreover, the "occupied" label was omitted from U.S. government reports while referencing the Palestinian lands that are occupied by Israeli settlers.

The illegal settlement projects in the occupied territories were a pillar of the electoral campaign launched by Netanyahu's government. However, according to the U.N., Golan's legal status will remain unchanged and still be considered "occupied territory" under international law. Since the decision was first made by the U.S., Turkey, along with other countries, has strongly criticized the unilateral move.