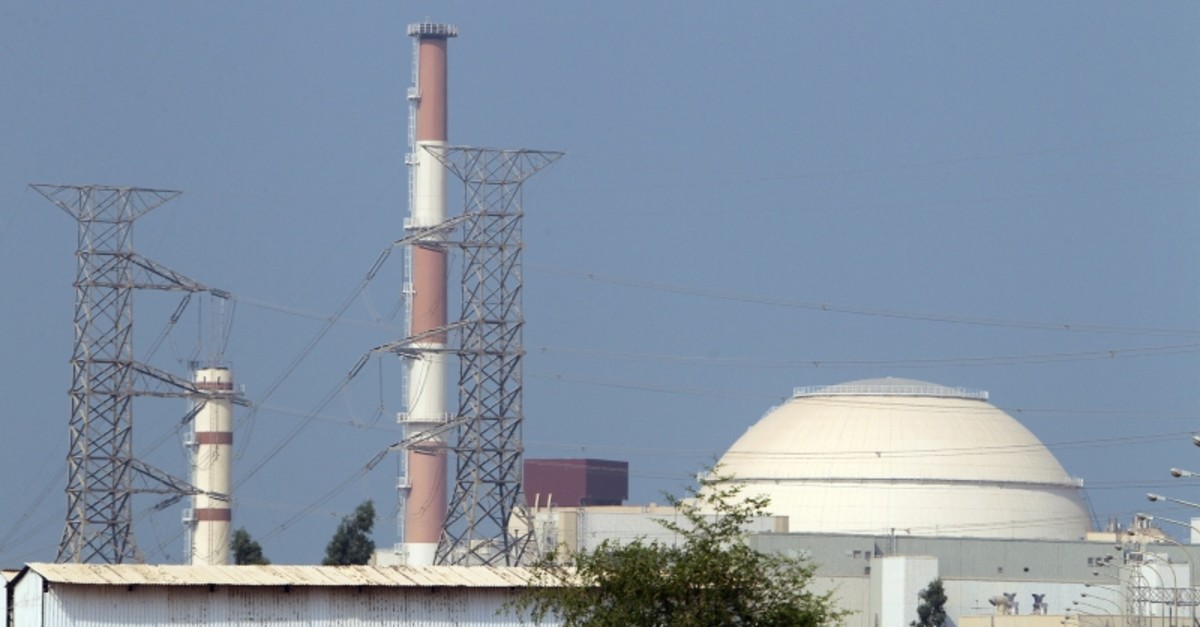 This file photo taken on Aug. 20, 2010 shows the reactor building at the Bushehr nuclear power plant in southern Iran, 1200 km south of Tehran. (AFP Photo)
by Associated Press Jun 17, 2019 11:26 am
Iran will break the uranium stockpile limit set by Tehran's nuclear deal with world powers in the next 10 days, the spokesman for the country's atomic agency said Monday while also warning that Iran could enrich uranium up to 20% — just a step away from weapons-grade levels.

The announcement by Behrouz Kamalvandi, timed for a meeting of EU foreign ministers in Brussels, puts more pressure on Europe to come up with new terms for Iran's 2015 nuclear deal.

The deal has steadily unraveled since the Trump administration pulled America out of the accord last year and re-imposed tough economic sanctions on Iran, deeply cutting into its sale of crude oil abroad and sending its economy into freefall. Europe has so far been unable to offer Iran a way around the U.S. sanctions.

The development comes in the wake of apparent attacks on oil tankers last week in the Mideast, assaults that Washington has blamed on Iran. While Iran has denied being involved, it has used mines in the past against commercial traffic around the crucial Strait of Hormuz, through which a fifth of the world's crude oil passes.

Kamalvandi accused Europeans of "killing time" as the clock runs down.

"If this condition continues, there will be no deal" anymore, Kamalvandi said.

President Hassan Rouhani, greeting France's new ambassador to Tehran on Monday, similarly warned that time was running out for the deal.

"The current situation is very critical and France and the other parties to the (deal) still have a very limited opportunity to play their historic role for saving the deal," Rouhani said, according to his website.

The nuclear deal had limited Iran to enriching uranium only to 3.67%, which is enough for power plants and peaceful purposes.

But after America's pullout and escalated sanctions, Tehran set a July 7 deadline for Europe to come up with better terms for the deal, or it would take additional steps away from the accord, likely meaning it would boost enrichment further.

Kamalvandi enforced that stance, saying that Tehran will increase uranium enrichment levels "based on the country's needs."

Enriching a supply of uranium means boosting its concentration of the type of uranium that can power a nuclear reaction. That type, or isotope, is called U-235. Enrichment basically means stripping away atoms of another isotope, called U-238. Boosting its purity to 20% means removing 22 more unwanted isotopes per atom of U-235, while going from there to 90% purity means removing just four more per atom of U-235. Ninety percent is considered weapons-grade material.

That means going from 20% to 90% is a relatively quicker process, something that worries nuclear nonproliferation experts. Iran maintains its nuclear program is for peaceful purposes.

Iran reached its nuclear deal with world powers in 2015, agreeing to limit its enrichment of uranium in exchange for the lifting of economic sanctions. Since President Donald Trump took office, the U.S. has steadily stripped away at the accord. Trump pulled America out of the deal in May 2018.

Tensions have ratcheted up in the region since last month. The U.S. rushed an aircraft carrier strike group and other military assets to the Mideast in response to what it said were threats from Iran. Meanwhile, a series of mysterious attacks have targeted oil tankers and Iranian-backed Houthi rebels in Yemen have launched a series of drone and missile attacks on Saudi Arabia.

Gen. Mohammad Hossein Bagheri, the chief of the general staff of Iran's armed forces, denied Tehran was involved in the ship attacks, saying Monday the country only would respond in "an open, strong and severe way" if needed. However, Iran's paramilitary Revolutionary Guard, which the U.S. suspects in the attacks, answers only to Supreme Leader Ayatollah Ali Khamenei and operates outside of the army's control.

Kamalvandi spoke to Iranian journalists in a news conference at the country's Arak heavy water nuclear reactor. Such reactors produce plutonium that can be used in nuclear weapons. Iran, under the nuclear deal, had reconfigured the facility to address Western concerns on that issue.

However, Kamalvandi said the country could rebuild the facility to make it produce plutonium. He also said Iran would continue to allow the U.N. to inspect its nuclear facilities for the time being.

The U.S. alleges Iran used limpet mines to target two tankers last Thursday, pointing to black-and-white footage it captured that American officials describe as an Iranian Revolutionary Guard vessel removing an unexploded mine from the Japanese-operated tanker Kokuka Courageous, one of the two ships that were targeted.

The Japanese tanker's owner said its crew described "flying objects" as having targeted the vessel.

In Brussels on Monday, European Union foreign ministers said they were still looking for more information on who might be behind the incident involving the tankers. Germany and others insisted they need a clearer picture before wading into a diplomatic conflict which could have serious implications in the Middle East.

German Foreign Minister Heiko Maas said that U.S. and British intelligence needs to be compared with other information from allies. "We have to be very careful," he said.

EU foreign policy chief Federica Mogherini said it was not a time to jump to action without proper information. "The maximum restraint and wisdom should be applied," she said ahead of the monthly foreign ministers meeting in Luxembourg.