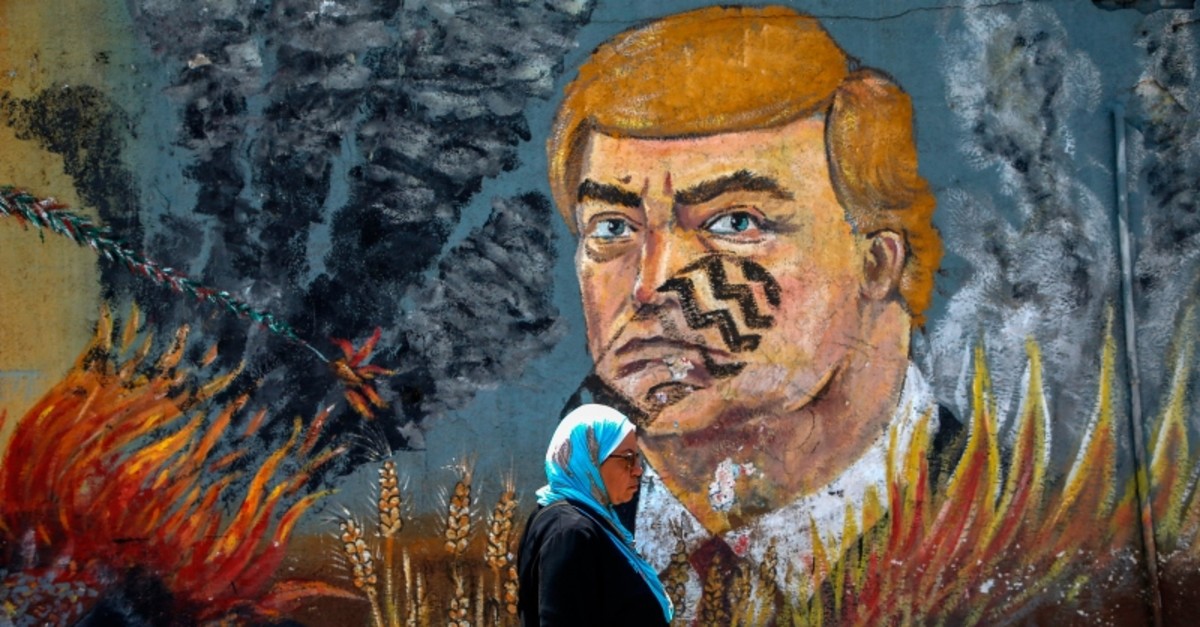 A Palestinian woman walks past a graffiti depicting U.S. President Donald Trump with a footprint on his face in Gaza City on June 23, 2019. (AFP Photo)
by Associated Press Jun 23, 2019 9:20 pm
The economic component of the Trump administration's long-awaited Mideast peace plan drew chilly responses from regional allies Sunday, two days before it was to be discussed at a conference in the Gulf.

An Israeli minister called a major piece of the White House's "peace to prosperity" plan "irrelevant," while Jordan and Egypt restated their support for a political solution to the Israeli-Palestinian conflict, pouring cold water on Washington's focus on economic issues.

The $50 billion economic plan, published on Saturday, calls for massive infrastructure projects and job creation for Palestinians. It makes no mention of Palestinian political aspirations — a state in the West Bank, Gaza Strip and east Jerusalem, lands Israel captured in 1967.

The plan does not address the core issues of the conflict: the contested holy city of Jerusalem, sought by both peoples as a capital; the fate of more than 5 million Palestinian refugees and their descendants; and the borders of a future Palestinian state.

American officials say these issues will not be raised at this week's conference in Bahrain. Neither Israel nor the Palestinians will have official representation at the two-day summit. The U.S. delegation is to be led by Treasury Secretary Steven Mnuchin.

The Trump administration said it did not invite Israeli officials in order to keep the conference apolitical. The Palestinians have refused to attend, saying the U.S. plan adopts hard line Israeli positions and neglects the internationally backed two-state solution.

Speaking Sunday in an interview with Israeli public radio, Cabinet minister Tzachi Hanegbi said one of the proposals in the Trump plan— a land link connecting the Israeli-occupied West Bank and Gaza Strip — was "irrelevant" so long as Hamas controls the latter.

The Trump administration's outline calls for "a major road and, potentially, a modern rail line" between the West Bank and Gaza, saying this would "reduce the complications of travel for Palestinians" and stimulate commerce.

Hanegbi, Israel's minister for regional cooperation and an ally of Prime Minister Benjamin Netanyahu, said the plan would be relevant would Hamas no longer ruled the strip, "meaning it's irrelevant today and in the foreseeable future."

Netanyahu, speaking during a tour of the Jordan Valley with U.S. national security adviser John Bolton, said Israel would "hear the American proposition, hear it fairly and with openness."

The 10-year plan calls for projects worth $6.3 billion for Palestinians in Lebanon, as well as $27.5 billion in the West Bank and Gaza, $9.1 billion in Egypt and $7.4 billion in Jordan.

Lebanon's Parliament Speaker Nabih Berri said Sunday that the country will not be "tempted" by money into what he said amounts to giving up Palestinian rights.

Berri said in a statement carried by the state-run National News Agency that although Lebanon is currently dealing with an economic crisis, it would be a mistake to think that billions of dollars could convince the government to abandon Palestinians' rights as refugees.

Sufian Qudah, a spokesman for Jordan's Foreign Ministry, said that while Jordan would attend the conference, "no economic proposal can replace a political settlement to the conflict which must be resolved according to the two-state solution."