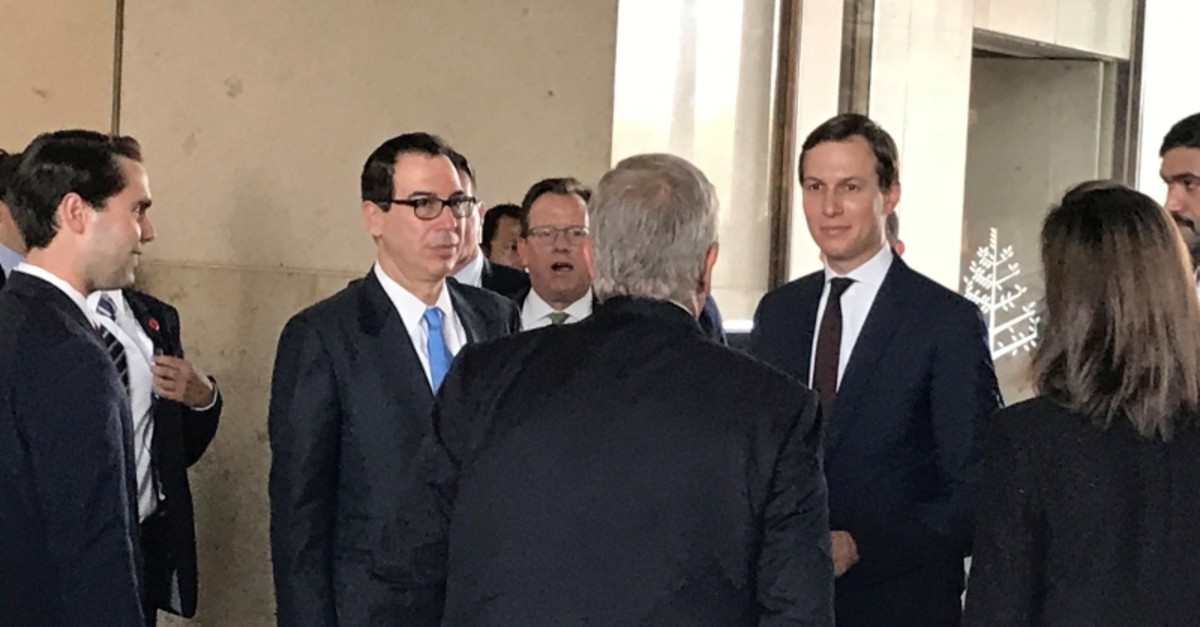 Jared Kushner on Tuesday called for the Palestinians to accept the "Opportunity of the Century" that he says will pump $50 billion into a stagnant economy but told them they must first agree if they want a peace deal.

Opening the long-awaited Middle East peace initiative of his father-in-law, President Donald Trump, at a conference in Bahrain, Kushner insisted that the administration has not "given up" on the Palestinians, whose leadership is boycotting the U.S.-led "economic workshop".

"Agreeing on an economic pathway forward is a necessary pre-condition to resolving the previously unsolvable political issues," Kushner said as he opened the two-day event before a gala dinner.

In a data-driven presentation in the style of a corporate executive, the 38-year-old adviser to Trump and family friend of Israeli Prime Minister Benjamin Netanyahu acknowledged the need for a political solution.

But Kushner said that the political plan would come later — and that the Palestinians should first embrace the economic component, which promises billions of dollars in investment in infrastructure, tourism and education.

"My direct message to the Palestinian people, is that despite what those who have let you down in the past say, President Trump and America have not given up on you," he said.

While dismissing the mocking description of his peace plan as the "Deal of the Century", he quickly offered another label.

"This effort is better referred to as the Opportunity of the Century, if the leadership has the courage to pursue it."

The Palestinian Authority and its rival Hamas have both denounced Kushner's so-called "Peace to Prosperity" initiative, saying it amounts to a bid by the unabashedly pro-Israel Trump to buy them off in return for not enjoying their own state.

Saeb Erekat, secretary general of the Palestine Liberation Organization, said that the Trump administration "is insinuating that they know what is best for the Palestinian people" without addressing the underlying issue of Israeli occupation.

"Such inciting campaigns aim at making the people and leadership of Palestine accept the dictations, threats and tyranny of both the U.S. and Israel — and they are doomed to fail," the veteran Palestinian negotiator said in a statement earlier Tuesday.

Hundreds of Palestinians took to the streets in the occupied West Bank to denounce the conference, burning pictures near Hebron of Trump and the king of Bahrain.

In unprecedented scenes, the kingdom welcomed dozens of Israelis including academics and journalists despite the lack of diplomatic relations.

The United States has hailed the workshop as bringing together the Israelis with Gulf Arabs due to their mutual hostility towards Iran.

US stands by Israel

Netanyahu, who has also criticized the Palestinian boycott, has spoken in recent months of annexing parts of the West Bank, a move that could effectively end hopes of a two-state solution.

The Trump administration has hinted that its political plan will not mention a Palestinian state — a sharp shift from the goal of years of U.S. diplomacy.

Trump has already taken landmark steps to support Israel including recognizing bitterly contested Jerusalem as Israel's capital, and Kushner is a family friend of Netanyahu.

Saudi Arabia, which sent its finance minister, in a statement said it supported "all international efforts aiming to achieve prosperity in the region".

But it also called for a "comprehensive and just peace" and reiterated its call for an independent Palestinian state with east Jerusalem as its capital.

Jordan and Egypt, the only two Arab nations to have signed peace deals with Israel, were attending but only sent mid-level officials.

Richard LeBaron, a former U.S. diplomat in the Middle East, said that the Trump administration fully expected that the Palestinians would stay away.

But Bahrain allows Kushner to portray Palestinian leaders as not caring about their own people as he keeps advancing Israeli interests, said LeBaron, now a senior fellow at the Atlantic Council think tank.

"The 'failure' of the Manama workshop will be success for the Trump strategy," he wrote in an analysis.

"It will permit Kushner and his colleagues to claim that they tried their best to address the situation and allow them to blame others for not cooperating."