Israel not abiding by pledges to deescalate tensions, Hamas says 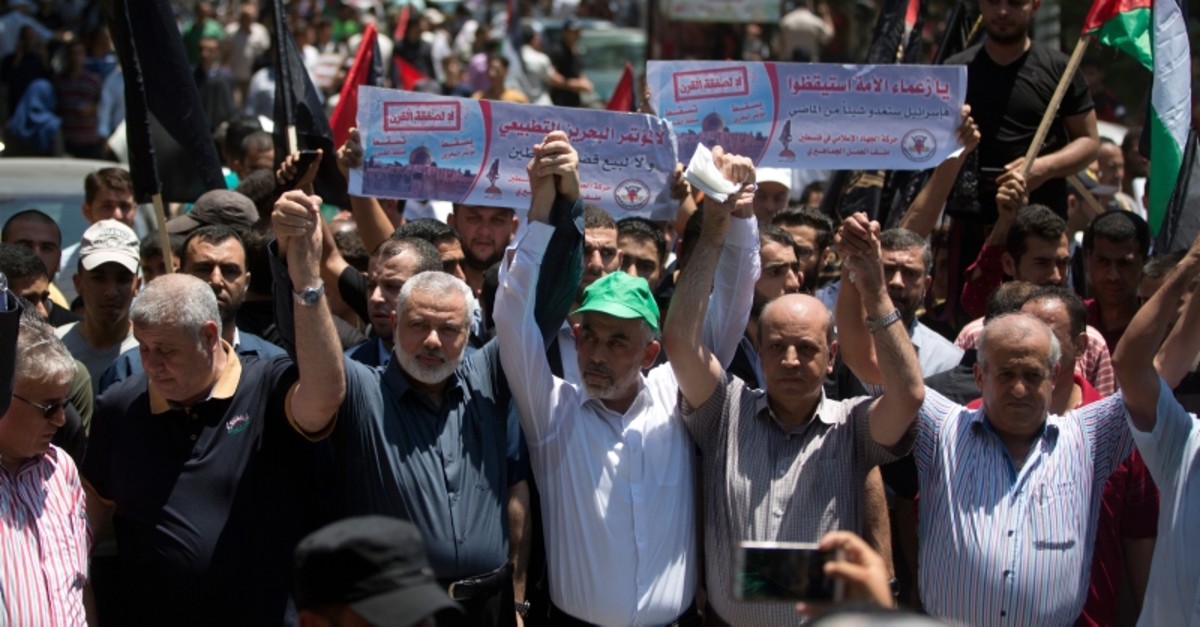 Ismail Haniyeh, third from left, and Hamas leader in the Gaza Strip Yahya Sinwar raise their hands up with leaders of the other Palestinian factions as they attend a protest against the conference in Bahrain, (AP Photo)
by Anadolu Agency Jun 26, 2019 7:30 pm

The leadership of Palestinian resistance group Hamas on Wednesday told mediating countries and international organizations, to impress upon Israel to abide by its commitments reached out, in an understanding late last year to hold the ceasefire.

Hamas leader Ismail Haniyeh asked Egypt, Qatar and the UN, who had brokered the truce between Israel and resistance factions, to assume responsibility of forcing Israel to implement its obligations, stipulated in the understanding.

"These parties [Egypt, Qatar and the UN] must assume their responsibilities by obliging the occupation to implement the benefits of the understandings," Haniyeh told protesters in Gaza, who had come out against the Manama conference.

The U.S.-led conference on Palestine began in Manama, the capital of Bahrain, to discuss the economic portion of the American back-channel Middle East peace plan, known as "deal of the century".

The truce reached between Israel and resistance factions was aimed to end a surge of violence in the Gaza Strip that has led to the deaths of scores of Palestinians.

Haniyeh said that the Israeli decision to stop the supply of Qatari fuel, to the sole power plant was an act of aggression and an attack on the rights of Palestinian people.

On Tuesday, Israel blocked fuel deliveries to the Gaza Strip, citing the launch of arson balloons from the blockaded territory.

Israel had resumed fuel supplies to Gaza as part of truce understandings. It had improved electricity supply in the strip, where two million residents, currently receive around 12 hours of power a day. Earlier, there was heavy load shedding, with residents receiving power supply just six hours a day.

On the Manama conference, Haniyeh rejected attempts to undermine fundamental rights of Palestinians to resist against Israeli occupation. He stressed that any financial aid should be unconditional and non-politicized.

As per understanding, Israel had to allow freedom of movement through the border crossings. Hamas officials have also asserted that Israel was also delaying implementation of electricity and job-creation projects, besides severely restricting the flow of money into Gaza.