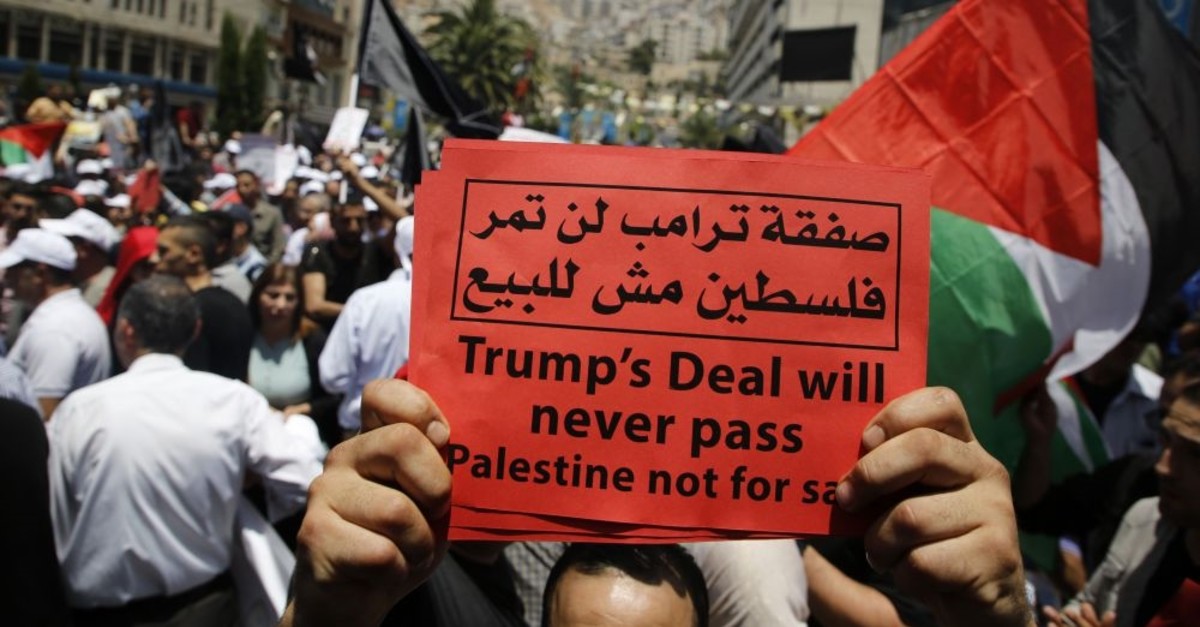 Palestinian demonstrators carry a banner and a national flag in the Israeli-occupied West Bank city of Nablus, June 25, 2019.
by Daily Sabah with Agencies Jun 26, 2019 12:33 am

Ahead of a controversial U.S.-led Bahrain conference on the Israeli-Palestinian conflict, a U.N. envoy underscored the importance to solve the decades-long issue, criticizing U.S.-led plans for a conference with an economic vision.

Money alone is not enough to solve the Palestinian issue, a U.N. envoy said. "Do you believe that an economic conference can solve the problem of Palestine? This is not true," Miguel Angel Moratinos, the U.N. High Representative for the Alliance of Civilizations, said during a symposium on the sidelines of the Asilah International Cultural Festival in northern Morocco. "We should address the basic political issues first," he said, addressing Bahrain's representative Ahmed Hashim al-Yusha. "Security and peace cannot be achieved with money," Moratinos said.

The $50 billion plan envisions a global investment fund to lift the Palestinian and neighboring Arab states' economies. The plan, which has been long-promised and faced a number of delays, calls for increased infrastructure projects between the Gaza Strip and the West Bank, with a stated goal to "empower the Palestinian people to build a better future for themselves and their children." Trump's administration has touted the plan and called the "Peace to Prosperity" plan as "the most ambitious and comprehensive international effort for the Palestinian people to date."

However, rejecting the U.S.'s investment plans for the Middle East, Palestinians themselves have called for a lasting political solution to end the decades-long conflict.

Israel's U.N. ambassador on Monday urged Palestinians to surrender their struggle for a homeland in exchange for economic benefits. Palestinian leaders have said the U.S. plan will be tantamount to surrender and declared Trump's initiative as dead on arrival. "I ask: What's wrong with Palestinian surrender?" wrote Ambassador Danny Danon in a New York Times op-ed. "Surrender is the recognition that in a contest, staying the course will prove costlier than submission."

Trump's so-called "Deal of the Century" peace plan has yet to be revealed in full; however, based on leaks in the media, it envisages making major concessions to Israel. Fundamental political issues such as the status of Jerusalem city and the rights of Palestinian refugees to return to their homes in historical Palestine were not mentioned in the plan. Jerusalem remains at the heart of the decades-long Middle East dispute, with Palestinians hoping that East Jerusalem, occupied by Israel since 1967, might one day serve as the capital of a Palestinian state.