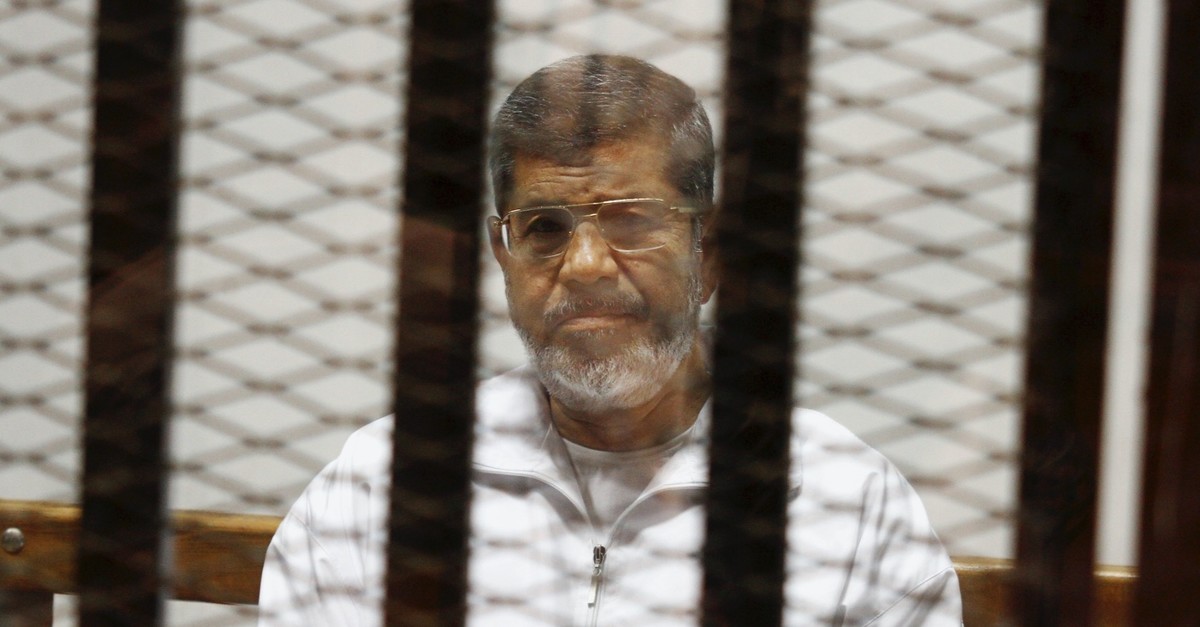 Egyptu2019s first democratically-elected President Mohammed Morsi sits in a defendant cage in the Police Academy courthouse, Cairo, May 8, 2014.
by Daily Sabah with Reuters Jun 28, 2019 12:06 am

Relatives of political prisoners live in constant fear due to the inhumane treatment in Egypt's prisons after the shocking death of the country's first and only democratically elected president, Mohammed Morsi

The children of high-profile Muslim Brotherhood members being detained in the same prison as Egypt's first democratically elected President Mohammed Morsi, before his sudden death last week, say that they fear for their parents' health.

Morsi, 67, died after collapsing during a court appearance at Cairo's Tora prison complex. He had been in prison undergoing multiple trials since the military led by then-Defense Minister and Chief of Staff Gen. Abdel-Fattah el-Sissi ousted him in July 2013 and launched a massive crackdown on the Muslim Brotherhood and its supporters.

Other senior Brotherhood members are jailed in Tora's maximum-security "Scorpion" wing, often in solitary confinement. The families of four detainees, all at Tora, said their relatives were being held under extremely poor conditions, deprived of adequate health care.

As Reuters reported, an Interior Ministry spokesman and Egypt's State Information Service, which handles relations with the foreign media, did not respond to several calls and messages seeking comment about the families' accounts, including accusations that some of their relatives needed surgery for abuse suffered in detention. Egyptian officials have previously denied mistreating prisoners or neglecting their health. The Egyptian authorities "put Morsi in solitary confinement... they withheld medication and gave him disgusting food... they did not give him the most basic human rights," the Brotherhood's Freedom and Justice Party said in a statement published on its website.

The death of Morsi on June 17 has caused massive backlash from the international community as it was widely speculated that his death was the result of mistreatment rather than natural causes.

Abdel Moneim Aboul Fotouh, a 68-year-old former presidential candidate who ran for election against Morsi in 2012, is being held in Tora's Al Mazra wing. Arrested in February 2018, he is being held in pretrial detention over alleged connections with the now-banned Brotherhood. He denies the charges, according to his son Ahmed.

Aboul Fotouh has diabetes, hypertension, heart and respiration problems, which require him to sleep with an oxygen machine that he brought with him but does not work properly in the high temperatures of the prison cell, Ahmed told Reuters. "The doctor said he has to undergo a prostate operation but they are not allowing it," he said. "They are deliberately not protecting his health... If they continue treating him like this, it will lead to the same result as Morsi," he added.

Former Morsi aide Essam al-Haddad has been in solitary confinement since his arrest six years ago and was moved to a solitary cell in the Tora hospital complex after having several heart attacks, his son Abdullah said. "His health has deteriorated significantly," Abdullah said.

Another of Haddad's sons, Gihad, a Brotherhood spokesman, is held in Scorpion, where he suffered physical abuse after writing an opinion piece defending the movement for The New York Times in 2017, Abdullah said. "He was beaten and physically tortured," he continued, adding that: "He says that his knee feels numb and he isn't getting any therapy... he is on the verge of losing his leg."

A Cairo court overturned life sentences for espionage against Essam and Gihad in 2016, but both men are being retried. According to one Human Rights Watch (HRW) estimate published in 2017, at least 60,000 people have been detained on political grounds since 2013. Liberal opposition figures swept up in el-Sissi's crackdown on dissent are also being held in the Tora prisons.

Morsi was being held in Tora's al-Molhaq prison and had been in solitary confinement since his arrest in 2013, according to his family. He had previously fainted during hearings, suffered diabetic comas, developed a condition in his left eye, and had back and neck pain from sleeping on the bare floor of his cell, according to statements from HRW, citing Morsi's court testimony and the rights group's interviews with relatives. His family was only allowed to visit three times in six years, his son Abdullah told Reuters, accusing authorities of "gross medical negligence."

The State Information Service said last week that Morsi's last official health request in November 2017, to be treated at his own expense, had been approved, and that an official report from the same year found he was suffering from diabetes but otherwise healthy. A year later, a panel of British members of Parliament that reviewed evidence about Morsi's detention conditions in 2018 at the request of Morsi's family found he was receiving "inadequate medical care," including for diabetes and liver disease, and that this was what "likely led to premature death."