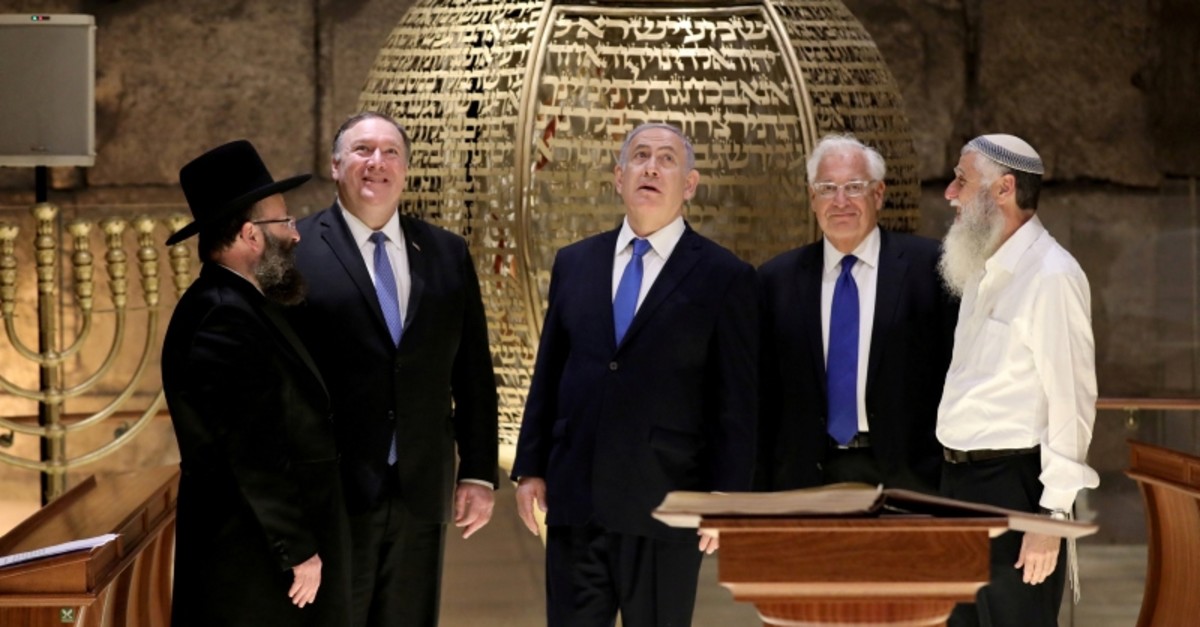 U.S. envoys attended the inauguration of a Jewish heritage site in East Jerusalem on Sunday, signaling support for Israel's hold over parts of the city that Palestinians want for a future state.

Palestinians - who view the heritage project and settlement activities in the Silwan district as moves by Israel to further cement control over areas it captured in the 1967 Middle East war - called the U.S. presence at the event a hostile act.

Two of Trump's top Middle East advisers - peace envoy Jason Greenblatt and Ambassador to Israel David Friedman - came to the opening of an excavated road that Israeli archeologists say was used by Jewish pilgrims to Jerusalem two millennia ago.

The "Pilgrims' Road" site is part of the City of David, an open-air Jewish archeological attraction open to the public and built within the East Jerusalem district of Silwan through purchases of Palestinian-owned property that have at times been contested in court.

Israel captured Silwan and neighboring districts in the 1967 conflict, annexed and settled them, angering foreign powers that back the Palestinians' goal of building a capital there for a future state taking in the occupied West Bank and Gaza Strip.

"Some people, not necessarily friends of ours, are obsessing about my being here," Friedman said at the ceremony, adding the excavation project uncovered "the truth, whether you believe or not ... the truth is the only foundation upon which peace will come to this area."

After his speech, Friedman, along with Greenblatt, Prime Minister Benjamin Netanyahu's wife Sara and donors to the project, wielded hammers to break through a wall and open the subterranean path to the holy site revered by Jews as the Temple Mount and by Muslims as the Noble Sanctuary.

In a statement, the Palestinian Foreign Ministry said it "views the American attendance at and celebration of the Judaisation activities in occupied East Jerusalem as hostile acts against the Palestinians".

"The administration of President Donald Trump proves day by day its ... unlimited affiliation to the colonial settlement project led by the extremist right in the state of the occupation (Israel)," it said.

RETURNING THE STATUE OF LIBERTY

He left open the possibility of a future Palestinian foothold there under a negotiated peace deal.

Israeli-Palestinian peace talks have been stalled since 2014 and the future of Jerusalem has long been at the center of the Middle East conflict.

The recognition has prompted the Palestinians to snub a Trump administration they accuse of bias on behalf of Israel, which counts all of the city holy to Jews, Christians and Muslims as its indivisible capital - a status not recognized abroad.

Palestinian officials boycotted a U.S.-led conference in Bahrain last week which Washington said was meant to lay the economic foundations for peace with Israel.

Friedman, asked in a Jerusalem Post interview published on Sunday if he saw Israel one day agreeing to Palestinian control of Silwan as part of a peace deal, said: "It would be akin to America returning the Statue of Liberty."

In addition to Jerusalem, Palestinians fret that Washington will give a green light to a possible move by Israel to annex Jewish settlements in the West Bank.

Greenblatt told a Jerusalem conference sponsored by the conservative Israel Hayom conference last week that diplomatic progress might be possible "if people stop pretending (Israeli) settlements - or what I like to call neighborhoods and cities - are the reason for the lack of peace".