UAE draws down troops in Yemen but upholds commitment to coalition 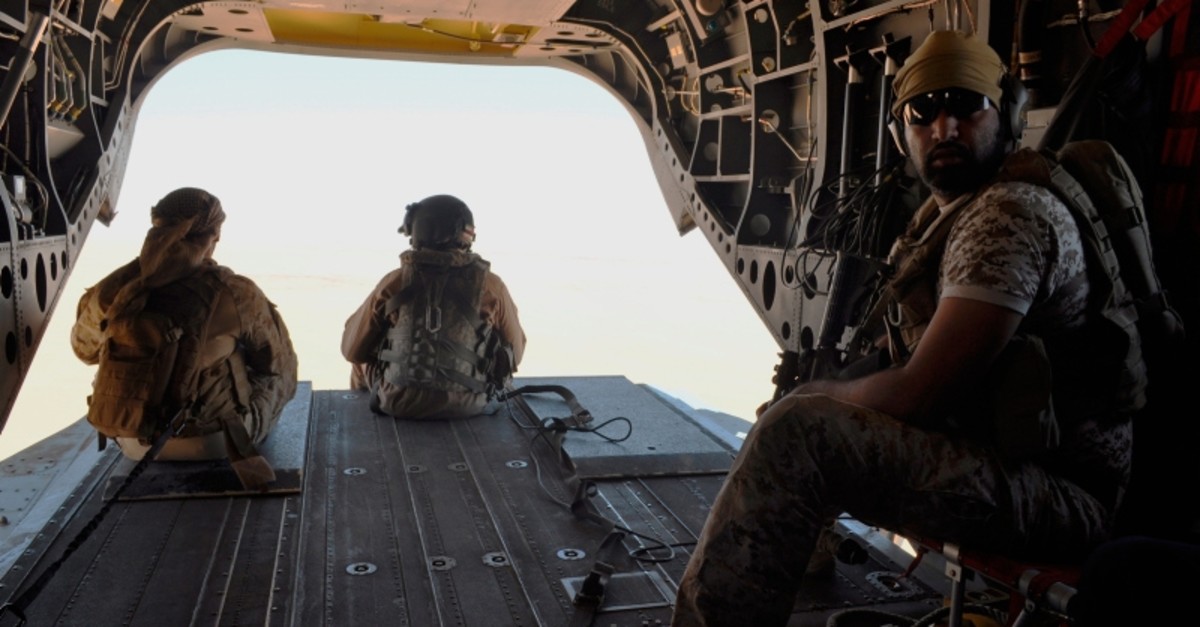 In this Sept. 14, 2015, file photo, Emirati soldiers stand guard out the rear gate of a Chinook military helicopter traveling from Saudi Arabia to Yemen. (AP Photo)
by Compiled from Wire Services Jul 09, 2019 10:44 am

The United Arab Emirates has drawn down its troop levels in Yemen but remains a key member of the Saudi-led coalition at war with Iran-aligned rebels there, a senior Emirati official said Monday.

The official confirmed that UAE troop levels are down, describing it as a "strategic redeployment." The official declined to disclose how many soldiers have left Yemen and how many remain.

"Definitely, we do have troop levels that are down for reasons that are strategic in Hodeida and reasons that are tactical," the official said, referring to the Yemeni port city where a U.N.-brokered cease-fire is supposed to be in place.

The official spoke on condition of anonymity because he was not authorized to discuss troop deployments for security reasons.

Talking to journalists in Dubai, the official said it makes sense to redeploy away from Hodeida and by extension from the UAE's military base at Eritrea's post of Assab, which was a staging ground for Emirati operations in Hodeida.

Any other redeployment in other parts of Yemen "will ebb and flow based our own assessment of what the situation involves," the official said.

"Our commitment in Yemen remains. We are part of the coalition," the official said, adding that the drawdown was discussed extensively with the Saudis.

Yemeni rebel Houthis Tuesday called for the full withdrawal of the Saudi-led military coalition in response to the UAE's drawdown.

"We call on the aggressors to withdraw from Yemen, as the Republic of Yemen rejects aggression, siege and air embargo," tweeted Mohammed Ali al-Houthi, head of the rebels' Higher Revolutionary Committee and an influential political figure.

"Withdrawing from Yemen is the ideal decision that must be taken at this time," he added.

The Saudi-led coalition has been at war in Yemen since 2015 to support the country's internationally-backed government. Tens of thousands of people have been killed and the war has generated the world's worst humanitarian crisis, drawing sharp bipartisan criticism in Congress.

When discussing the drawdown, the Emirati official also noted the escalating tensions between the U.S. and Iran in the Persian Gulf region, saying the UAE was not blind to "the overall geostrategic picture."

A number of American academics and analysts who met recently with Emirati military officials say that in addition to withdrawing a significant number of troops from Yemen, the Emiratis have also moved Patriot batteries and other defense systems from Yemen back to the UAE to boost security and readiness at home amid heightened tensions with Iran.

Yemeni military officials and tribal leaders, who also insisted on speaking anonymously to discuss the situation, said the UAE redeployed forces from the eastern province of Marib. Meanwhile, they said Emirati military reinforcements were sent to the southern provinces of Dhale and Shabwa. They said the UAE had also redeployed its forces and weapons to the Red Sea port town of Mocha.

The Houthis said in May they would begin to redeploy from three key ports in Yemen, including Hodeida, which handles 70% of Yemen's food imports and humanitarian aid. The long-delayed redeployment of Houthi forces there is seen as a key first step toward ending the civil war, which erupted in 2014 when the Houthis seized the capital, Sanaa.

Meanwhile, security concerns spiked in the UAE after four oil tankers were hit off its coast of Fujairah in May in an attack that the U.S. has blamed on Iran.

"We're very, very protected when it comes to drones ... Patriots, Thaad system. But you know again, I think mostly, we are also protected through what I would say is continuous diplomacy," the Emirati official said before adding "our whole effort has been at de-escalation."

The UAE supports U.S. sanctions on Iran, but has also stressed that war with Iran is not in the region's interest.

Two other tankers were attacked in June in the Gulf of Oman, forcing crews on both ships to be rescued and evacuate. Iran denies any involvement.

Over the same period, Houthis have upped their attacks on Saudi Arabia, using bomb-laden drones and missiles to target a Saudi airport, killing a civilian and wounding dozens others. The Houthis also claimed an attack on a Saudi oil pipeline.