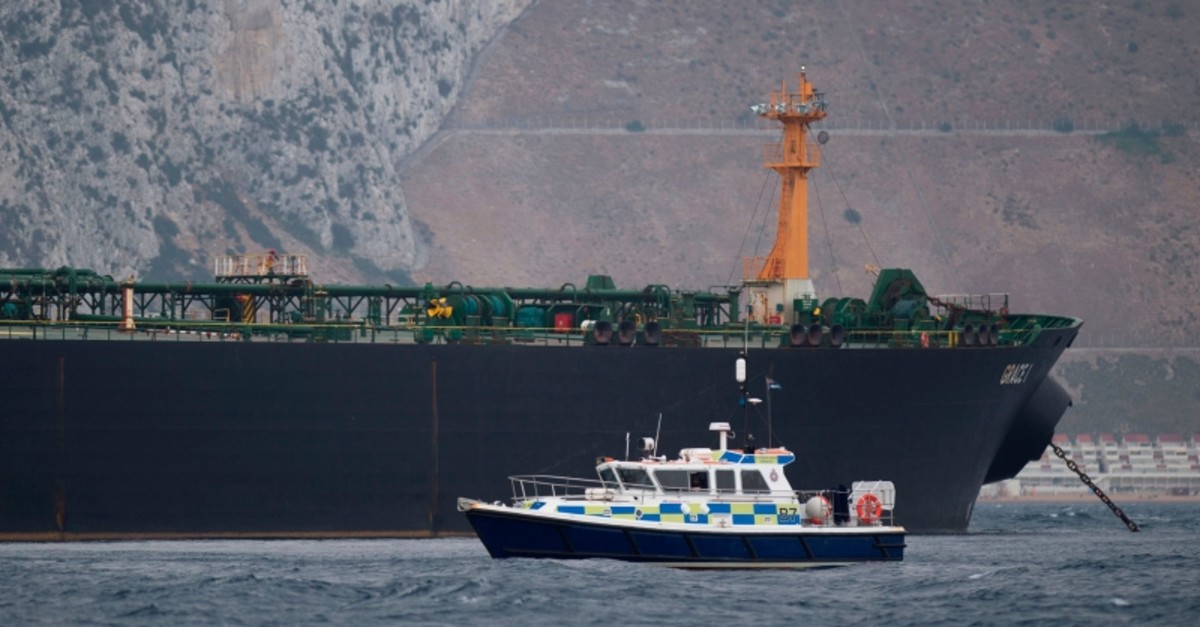 "This follows a protracted search of the vessel where documents and electronic devices have been seized and examined," police said in a statement.

Gibraltar police are interviewing both men, who have "been accorded their legal entitlements and access to consular representation," it added.

Gibraltar forces and British marines boarded the ship, Grace 1, and seized it on July 4 off the coast of Gibraltar, saying they believed it to be destined for Syria to deliver oil, which is subject to European sanctions.

Tests have shown the 330 meter (1,000 feet) tanker which is capable of carrying two million barrels of oil, was "carrying a full load of crude oil", the government of Gibraltar said Monday.

Iran has condemned the detention as an "illegal interception" and said the tanker was not headed to Syria.

The arrests come after London said earlier on Thursday that armed Iranian boats tried to "impede" a UK supertanker in the Gulf before being warned off by a British warship.

Iran's Revolutionary Guards denied involvement but also cautioned both the United States and Britain that they would "strongly regret" the UK Royal Marines' detention of the Grace 1.

"There has been no confrontation in the last 24 hours with any foreign vessels, including British ones," the Revolutionary Guards said in a statement.

The Guards' statement said that if they were ordered to seize foreign vessels they would do so "immediately, decisively and speedily."

Iranian President Hassan Rouhani warned Britain on Wednesday of the "consequences" of what he described as "a foolish act."

"I point out to the British that you initiated insecurity (on the seas) and you shall grasp the consequences of it later on," Rouhani said in comments to the cabinet broadcast by state TV.

On Monday Iran's defense minister had vowed to respond to Britain's move.

Calling the tanker seizure an act of maritime piracy, Brigadier-General Amir Hatami said it "will not be tolerated by us and will not go without a response."

The secretary of Iran's Expediency Council, a key advisory and arbitration body, warned that if Britain failed to release the tanker Iran would be forced to take tit-for-tat action.

"If Britain does not release the Iranian oil tanker, the relevant authorities will be duty-bound to take reciprocal action and seize a British oil tanker," said council secretary Mohsen Rezai.

The incident follows a spike in Iranian-U.S. tensions in recent weeks, with Washington blaming Tehran for multiple attacks on tanker ships, and the Islamic republic shooting down an American surveillance drone.

It also comes as Europe mulls how to respond to Tehran breaching the uranium enrichment limit it agreed to under a landmark 2015 nuclear deal abandoned by the United States.