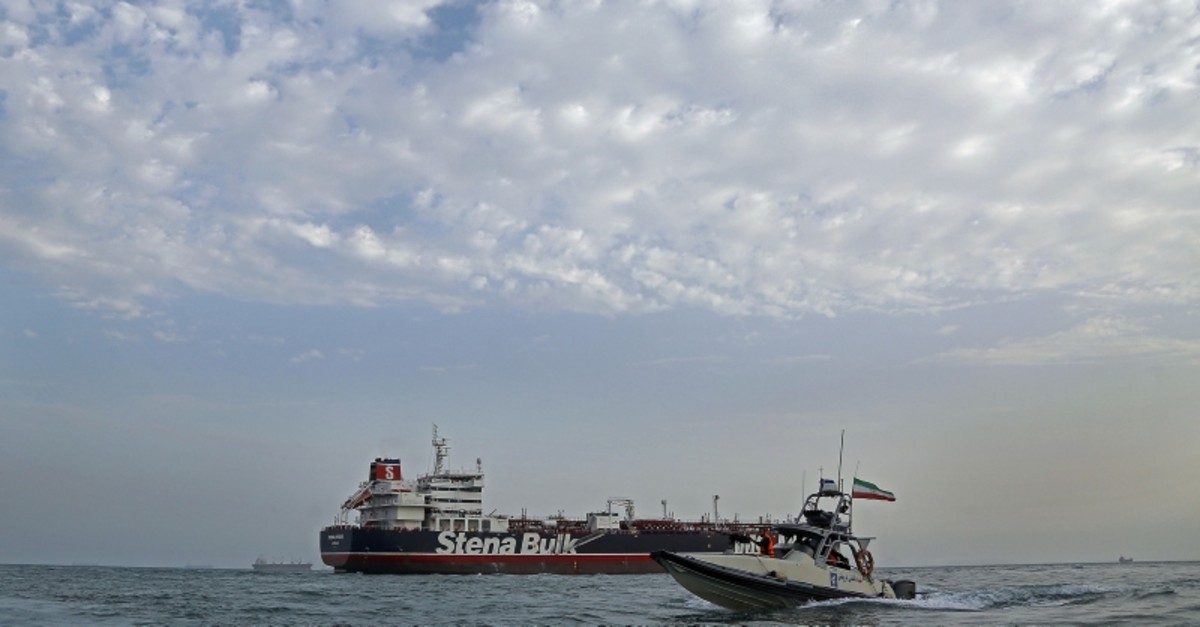 A picture taken on July 21, 2019, shows Iranian Revolutionary Guards patrolling around the British-flagged tanker Stena Impero as it's anchored off the Iranian port city of Bandar Abbas. (AFP Photo)
by Compiled from Wire Services Jul 21, 2019 9:07 pm

United Kingdom is considering a range of measures including sanctions against Iran in response to an escalating row over oil tankers that have been seized by the two countries.

"We are going to be looking at a series of options," British Defense Minister Tobias Ellwood said when asked about the possibility of sanctions by broadcaster Sky News.

The prime minister's office announced Sunday night that Theresa May would hold an emergency meeting on Monday over the Stena Impero tanker, which was seized by Iran's Revolutionary Guard on Friday in the Strait of Hormuz.

"As well as receiving the latest updates from ministers and officials, the... meeting will discuss the maintenance of the security of shipping in the Persian Gulf," a Downing Street spokeswoman said Sunday.

The freezing of Iranian assets is being considered as an option, according to unconfirmed media reports. The Foreign Ministry has declined to comment.

On Friday, Iran stopped the Britain-flagged oil tanker Stena Impero and escorted it to the port of Bandar Abbas, where it and the 23 crew members will stay pending an investigation, according to Iranian media.

The Iranian Revolutionary Guard claimed that the Stena Impero had continued without stopping after a collision with a fishing boat. The vessel also allegedly turned off its GPS tracker, strayed onto the wrong side of the busy shipping lane and was carrying environmentally hazardous materials.

Stena Bulk, the operator of the British-flagged Stena Impero, says the vessel was in "full compliance with all navigation and international regulations."

The Swedish-based operator said it has issued a request to Bandar Abbas port authorities to visit the ship's 23 crew members. The company said its staff in India, Latvia, the Philippines and Russia were "in constant touch" with the crew members' families.

The confrontation between Britain and Iran began earlier this month when the Iranian oil carrier Grace 1 was impounded off the British territory of Gibraltar for allegedly violating EU sanctions with its Syria-bound cargo.

Britain later accused Iran of harassing a British ship in the Gulf.

The Omani Foreign Ministry said the Gulf country was in contact with all parties to secure safe passage for ships through the vital Strait of Hormuz.

"The Sultanate [of Oman] looks forward to Iran's release of the British ship and calls on the Islamic Republic of Iran and the United Kingdom to solve their differences through diplomatic ways," the ministry said in a Twitter statement.

Unlike other Gulf countries, Oman maintains warm ties with Iran, which is also locked in heightened tensions with the United States.

Germany's Foreign Minister Heiko Maas echoed Oman's calls for a diplomatic solution and warned that Iran's seizure of the vessel could lead to a violent conflict. "It is about preventing war," the SPD politician told the Bild newspaper's Sunday edition.

Should diplomacy fail and there be a military escalation, there would be "no winners, only losers," he said.

The US, which is pursuing a "maximum pressure" campaign with sanctions on Tehran after withdrawing from the 2015 nuclear deal, has repeatedly accused Iran of military aggressions in the region.

Iran's ambassador to Britain, Hamid Baeidinijad, took to Twitter on Sunday to warn London against any escalation in the row.

"UK government should contain those domestic political forces who want to escalate existing tension between Iran and the UK well beyond the issue of ships. This is quite dangerous and unwise at a sensitive time in the region," he wrote. "Iran however is firm and ready for different scenarios."