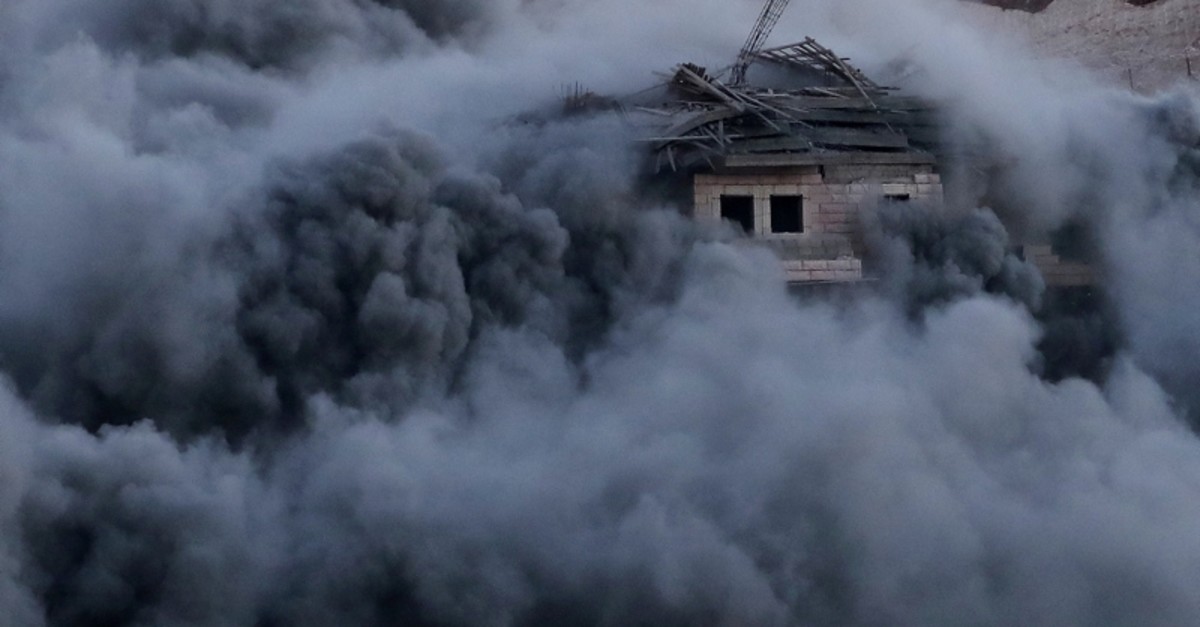 A Palestinian building is blown up by Israeli forces in the village of Sur Baher which sits on either side of the Israeli barrier in East Jerusalem and the Israeli-occupied West Bank July 22, 2019. (Reuters Photo)
by Compiled from Wire Services Jul 23, 2019 10:16 pm

France, Germany, Spain and the U.K. have strongly condemned the Israel's latest move to demolish Palestinian homes in the southeast of Jerusalem.

A joint statement by the governments of the four countries said they "remain seriously concerned by the continued demolition of Palestinian property by Israeli authorities."

"In all but the most exceptional of circumstances, demolition in occupied territories is contrary to International Humanitarian Law and to UNSC resolutions. The practice causes unnecessary suffering to ordinary Palestinians and is harmful to the peace process," the statement said.

In a written statement, Turkey's Foreign Ministry said the demolition was yet another example of Israel's "aggressive occupation" policies.

"We strongly condemn such [Israeli] acts towards changing the demographic structure of Jerusalem," said the statement, calling on Israel to stop illegal actions that damage hopes for a two-state solution.

In addition, the statement urged the international community to protect the historical and legal status of Jerusalem and the rights of Palestinians.

On Monday, bulldozers accompanied by hundreds of Israeli soldiers moved into the neighborhood of Wadi Homs in East Jerusalem and began to raze several buildings in the area.

Israeli authorities claim that the buildings were constructed without a permit.

Israel occupied East Jerusalem, in which the flashpoint Al-Aqsa Mosque compound is located, during the 1967 Arab-Israeli War.

"In this specific case, the demolitions were particularly egregious as a number of the buildings were located in Areas A and B, under the jurisdiction of the Palestinian Authority according to the Oslo Agreements, and thus constitute a violation of these agreements. They set a dangerous precedent that directly jeopardises the two state solution," the statement said.

In a move never recognized by the international community, Israel annexed the entire Jerusalem in 1980, claiming it as the self-proclaimed Jewish state's "eternal and undivided" capital.

Jerusalem remains at the heart of the decades-long Middle East dispute, with Palestinians hoping that East Jerusalem might one day serve as the capital of a Palestinian state.