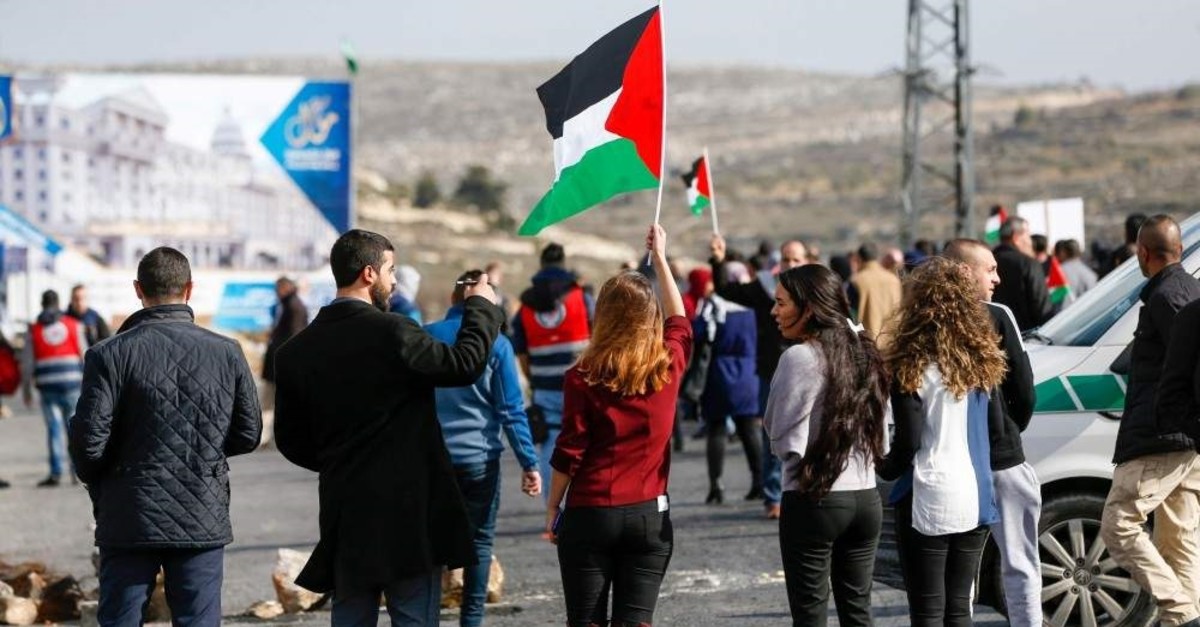 Palestinians wave the national flag as they protest a US peace plan proposal, at the northern entrance of the West Bank city of Ramallah, Jan. 30, 2020. (AFP Photo)
by Daily Sabah with Reuters Jan 30, 2020 5:22 pm

Palestinian President Mahmoud Abbas will speak in the United Nations Security Council in the next two weeks about the U.S. Middle East peace plan, Palestinian U.N. envoy Riyad Mansour said on Wednesday. Mansour told reporters he hoped the 15-member Security Council, the same meeting that Abbas would address, would vote on a draft resolution on the Israeli-Palestinian peace plan unveiled by U.S. President Donald Trump on Tuesday.

However, the U.S. is certain to veto any such resolution, diplomats said, allowing the Palestinians to take the draft text to the 193-member U.N. General Assembly, where a vote would publicly show how Trump's peace plan has been received internationally.

"We will try our best with our friends to have the strongest possible draft resolution and to receive the strongest and largest possible voting in favor of that resolution," Mansour said. He did not give details of what might be in the text. "Of course, we would like to see a strong, large opposition to this Trump plan," he said with Tunisian U.N. Ambassador Moncef Baati, currently serving a two-year term on the Security Council, standing beside him.

Abbas said “1,000 no's” to the Mideast peace plan, which strongly favors Israel. Abbas had rejected the deal before it was announced saying the U.S. was hopelessly biased toward Israel.
In the occupied Gaza Strip and West Bank, Palestinians continued to rally Thursday in protests against the so-called Middle East peace plan. Demonstrators in Gaza organized two rallies where they raised banners denouncing the plan, with slogans demanding it be scrapped. The Hamas-run government media office staged a demonstration in front of the office of the U.N. Special Coordinator for the Middle East Peace Process (UNSCO), west of Gaza.

U.S. President Donald Trump and Israeli Prime Minister Benjamin Netanyahu shared the so-called “peace plan” with the public late Tuesday. The plan was considered not a peace plan, but rather a major step toward consolidating and materializing the U.S.-Israel-Gulf alliance. By admitting the situation on the ground, the U.S. administration gave Israel what it wanted since the plan for the Middle East does not contain a fully independent Palestine but a stronger Israel and Gulf against Iran and other threatening elements for the U.S. The plan includes important points about the future of Palestine and the Israeli settlements and annexations.
A Palestinian state would be established eventually, according to Trump, but Netanyahu stated that its sovereignty would be limited. Moreover, Trump’s son-in-law and adviser Jared Kushner said the Palestinians should have completed their preparations for becoming a state. One of the most sensitive issues was the status of Jerusalem, a city which is accepted as a holy land by the members of the three Abrahamic religions. Trump said East Jerusalem would be the capital of Palestine while Jerusalem would serve as Israel’s undivided capital, noting that al-Aqsa mosque will be open to Muslims and that Israel would be responsible for ensuring freedom of religion.