Election results may add to woes of displaced Syrians 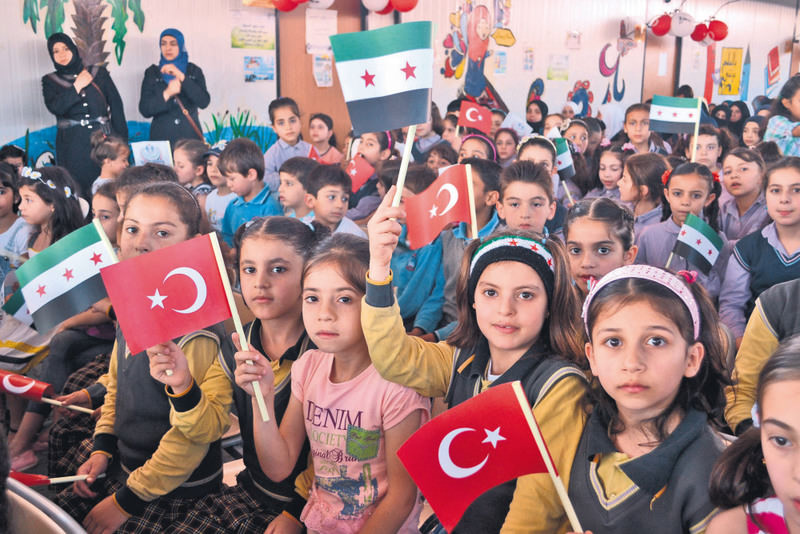 Young Syrian students at a school for refugees waving Turkish and Syrian flags at an event on June 1 in the southern city of Hatay.
by Yusuf Ziya Durmuş Jun 09, 2015 12:00 am

The outcome of Sunday's general elections, which raised the likelihood of a coalition government, triggered concerns about the future of displaced Syrians in the country, with the oppositions' track record on refugees not so friendly

The result of the parliamentary elections on Sunday was the first blow to a streak of victories for the ruling Justice and Development Party (AK Party). With the party losing the seats required for a single-party government, concerns are piling up on the future political uncertainty in Turkey. A coalition government is the most likely outcome and this might spell trouble for nearly 1.8 million Syrians in the country where the opposition parties are known for their hostile or ignorant stance toward the displaced neighbors of Turkey.

Turkey has spent over $5 billion on Syrians since the conflict broke out in its southern neighbor four years ago, driving thousands to the borders and to Turkey, Jordan and Lebanon. Under the AK Party government, the country pursued a policy openly siding with the Syrian opposition against the brutal crackdown of the Assad regime. On the humanitarian side, it is one of the best safe havens for Syrians fleeing the violent conflict as it keeps its borders open, unlike other neighbors of Syria, and hosts over 250,000 in state-of-art camps along its lengthy border.

Caring for Syrians, the majority of which are children in need of immediate aid, was apparently not received well by the opposition parties. A rise in housing prices in the cities where masses of displaced Syrians lived with means to rent and with a view of impoverished Syrians as cheap labor, played into the hands of the opposition.

With the AK Party failing to secure the 276 seats required to form a government on its own, scenarios of a coalition government with the opposition parties abound. This may not bode well for Syrians as none of the opposition parties have policies in their agenda toward Syrians. Though they criticize the government for heaping financial resources on the refugees, they do not offer any policies to effectively help tens of thousands taking shelter in Turkey.

Moreover, outright hostility may add to their woes. Republican People's Party (CHP) leader Kemal Kılıçdaroğlu already set his sights on Syrians as an election pledge. Kılıçdaroğlu's pledge of economic prosperity for Turkey will apparently be funded from the budget allocated to address the needs of Syrians. The opposition leader, whose party trailed second in Sunday's elections, thus making it a potential candidate for any coalition, based his policy on Syrians on "sending them back." He had promised that the CHP would send "our Syrian brothers back to the place they belong. Everyone should be happy in the land he or she was born." The CHP's plan if it comes to power is to negotiate a peaceful solution with Bashar Assad whose regime has friendly ties with the Turkish opposition party. This naturally irks refugees in Turkey who fled from Assad's indiscriminate attacks to Turkey, whose leadership is among the fiercest critics of the Assad regime and flatly opposes a solution to the conflict while Assad is in power.

Though an outright effort to drive out Syrians from Turkey does not seem plausible if the CHP has its say in a coalition government, a change in policy may be considered.

Uğur Yıldırım, director of Istanbul-based International Refugee Rights Association says although it is too early to talk, there was a tangible anxiety among Syrians he spoke with about the elections. "I felt a general concern among them and a sense of uncertainty. They already have their share of problems, like the fact that there is a war going on in their country and problems they faced in daily life," Yıldırım says.

"As a matter of fact, a drop in the votes for the AK Party, a party that seemingly embraces those people, made them feel disquieted," he adds.

Associate Professor M. Murat Erdoğan, director of Hacettepe University Migration and Politics Research Center, says Syrians are here to stay for a long time and politicians should avoid hate speech. Erdoğan says policies toward Syrians may change in case of a coalition though he does not expect a radical change. "The majority of these people will stay here even if the war ends. Their concerns are understandable. They cannot predict what will happen when a government they see as the champion of their cause is replaced. However, no government can send them away under any circumstances as this will be a humanitarian disaster," he says.

Erdoğan says the opposition should be more careful on the issue of refugees. "You can criticize the government's policies on Syria or on Syrian refugees but hate speech towards refugees is wrong."

The Nationalist Movement Party (MHP) is another matter. It boosted its vote in the elections that paved the way for its inclusion into a possible coalition. A coalition with the CHP is not far-fetched as both parties supported a joint candidate in the latest presidential elections and though it is a staunch opponent of the AK Party policies, the probability of a coalition still remains. The MHP's policy toward Syrians is similar to the CHP's. Its rhetoric focuses on laying the blame on the government for a "refugee problem," not refugees themselves. Ümit Özdağ, a professor who secured a seat for the MHP from Gaziantep, a major hub of displaced Syrians, has said in an interview that his constituency faced "a Syrian problem." Özdağ has said Syrians contributed to a rising crime rate and cheap labor and did not pay taxes for businesses they set up in the province.
Last Update: Jun 09, 2015 10:38 pm
RELATED TOPICS