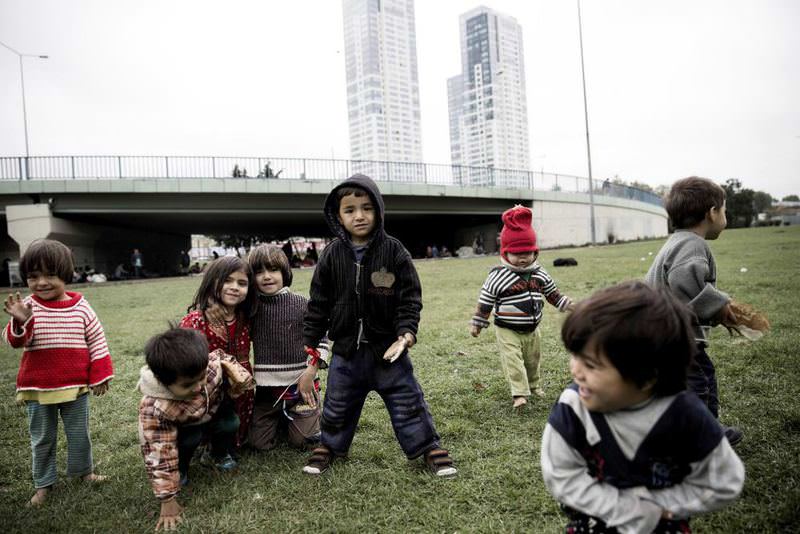 Afghan children play near an overpass where their families stay. Activists have called on authorities to help refugees.
by Daily Sabah with AA Oct 22, 2015 12:00 am

Turkey hosts new ‘guests' the term used to describe the refugees, from Afghanistan who struggle to live on Istanbul's streets, while 3,000 Meshketian Turks from conflict-ridden Ukraine will arrive in the coming weeks

As a country already struggling to cope with a steady flow of refugees with little international assistance, Turkey is determined not to turn back those fleeing persecution, wars and other troubles in their home countries. The country prepares to host 3,000 Meshketian Turks from Ukraine, which is gripped by tensions triggered by pro-Russian separatists, while hundreds of Afghans took shelter in Turkey over the past couple of months with the Taliban threat looming over their country once again.

Some 3,000 Meshketian Turks caught in the crossfire between two sides in the Ukrainian conflict will be settled in the eastern provinces of Erzincan and Kars in residences provided by the state-run Mass Housing Administration (TOKİ), which provides residences for low-income citizens.

Meshketian Turks, known as Ahiska Turks in Turkey, which already hosts a considerable population of this Turkic community, face another displacement 26 years after they were forced to flee Uzbekistan after a violent pogrom in which they were deported by the Soviet regime in 1944 from their homeland in Georgia. Their appeal to Turkey for relocation was welcomed by President Recep Tayyip Erdoğan who instructed that they be settled in the country from Ukraine's Donetsk and Slavyansk.

Speaking to Anadolu Agency, Fuat Uçar, the head of an international association of Meshketian Turks, said they spoke to Erdoğan during the latter's visit to Ukraine in March, and upon hearing of their ordeal, Erdoğan instructed the Turkish authorities to help them. "The Turkish government implemented a new regulation for their resettlement. A senior Prime Ministry official coordinates the efforts," he said, thanking Turkey for reaching out to Meshketian Turks. Uçar said it was impossible to move all Meshketian Turks at once, and they would bring 150 families at first. He said the resettlement process would start in a few weeks, and they would be granted Turkish citizenship in the future. "Turkey wants to help them in their homeland in Ukraine, but it is impossible under current circumstances. So, Mr. President told them they should not stay there," he said.

Turkey is known for its open-door policy for refugees, especially those escaping from Syria where a brutal war rages. More than 2 million Syrians have taken shelter in Turkey, which hosts a small fraction of them in refugee camps along the Turkish-Syrian border. The country complains that the international community has not helped it by sharing the heavy burden of refugees but pledges not to turn down those arriving from conflict zones.

In Istanbul, another refugee drama was revealed yesterday, as a nongovernmental organization (NGO) highlighted the plight of Afghan refugees who live under a bridge in the city's Zeytinburnu district with no place to take shelter. Some 400 refugees fleeing the conflict between Kabul and the Taliban arrived in the city three months ago, with the hope of traveling to Europe. Their dreams, as expected, were shattered, as Turkey does not allow refugees to sneak into third countries through its territories. Desperate refugees now brace for worsening weather, as many do not have winter clothing, including children. Activists from the NGO called on authorities to help the refugees. An official from Istanbul-based International Association of Refugees' Rights told reporters about the ordeal of refugees. "They have to sleep on wet ground with no blankets for children. Sometimes, they don't even have a piece of bread to eat. They are better off during the day, as they can take shelter in enclosed places, but they have to come back here to sleep at night. Our NGO delivers food to them, but they need a better solution. People are aware of their presence, but they do not do anything," he said.

Fahrettin Akbaş, a local who helps Afghan refugees, said many of them hail from Kunduz, which the Taliban briefly captured last month. "They first traveled to Iran, but Iran rejected them. When they heard that Europe would take more refugees, they came to Turkey," he said.

Esat Aslanoğlu, an Afghan national who has been living in Turkey for the past two decades, also volunteered to help refugees. He told Anadolu Agency that more people escaped when the Taliban stepped up its offensive in several Afghan provinces. "They all need help. They don't have money, and those with money were defrauded by human smugglers. They ask Turkey to let them to go to Europe," he said.
RELATED TOPICS