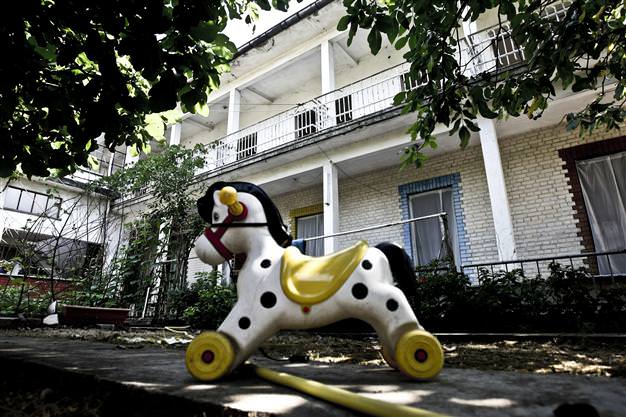 | AFP Photo
by Burcu Çalık Oct 27, 2015 12:00 am
The deed to Camp Armen, a historic Armenian orphanage in Istanbul, was returned to its original owners after protests against the then owner owner over the demolition of the site.

Gedikpaşa Armenian Protestant Church Foundation, the first owner of the orphanage located in the Tuzla district of Istanbul, received the deed on Tuesday.

Kirkor Ağabaloğlu, a pastor with the foundation, thanked the prime minister for helping resolve the issue and said the orphanage, which was neglected for decades, will be renovated and reopened.

Camp Armen was confiscated by the state after the Supreme Court of Appeals ruled in 1974 that foundations set up by foreigners could not acquire property. The decision was based on a controversial 1936 regulation that paved the way for the seizure of properties from non-Muslim communities. The deed for the orphanage, where more than 1,500 Armenians spent their childhood, was canceled in 1979. It was returned to its former owner and changed hands several times since then. Among the orphans raised at the historic orphanage is the late Hrant Dink, the former editor-in-chief of Agos daily and a renowned figure from the Armenian-Turkish community who was assassinated in 2007.

Plans to demolish the site by its owner had triggered protests in May with activists camping out to block the bulldozers. The owner later scrapped plans and pledged to donate the orphanage to the church foundation after Prime Minister Ahmet Davutoğlu personally asked for a settlement of the matter.

Ağabaloğlu said it was a dream come true and thanked authorities for resolving the dispute. "We will return it to its original state. It will serve children again," he said.

"It was a big surprise for us. Camp Armen has been a source of trauma for our community for years. We fought a legal battle for a long time and were defeated. Under law, return of property confiscated by the state and sold to third parties is not possible, but the prime minister resolved it," he said.

He said the orphanage was part of the history of Armenians in Turkey, and they would not allow it to be wiped out. "There will be smiling children there again," he said.
Last Update: Oct 28, 2015 4:57 pm
RELATED TOPICS