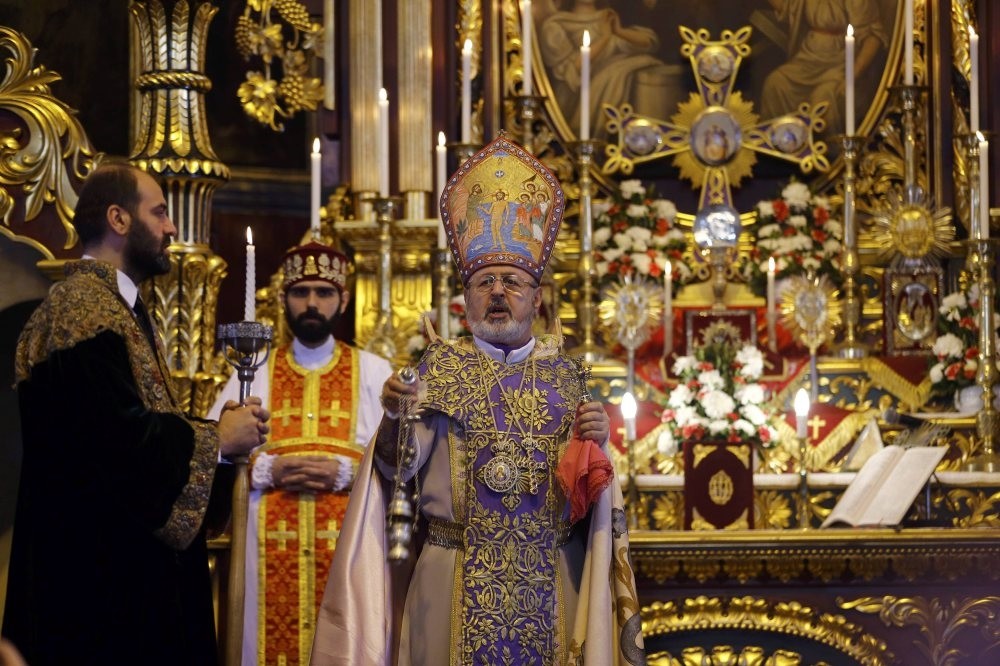 Acting patriarch Ateu015fyan is under fire over stalling process.
by Daily Sabah Feb 18, 2017 12:00 am
A Turkish Armenian weekly reported that the election of the patriarch, a dispute that pitted the acting patriarch against others, is scheduled for May 28. The decision taken at a meeting on Thursday may not end the dispute but it signals the first time that the election process has progressed. Agos reported that Acting Patriarch Aram Ateşyan and Sahak Maşalyan, head of the Spiritual Council who earlier announced his resignation over frustration with the process, joined others to agree on a timetable for the election.

The seat of the patriarch of the Armenian Patriarchate has been empty since 2008 when Patriarch Mesrob II, suffering from an illness, went into a vegetative state. The failure to elect a new head has been frustrating members of the minority concentrated in Istanbul.

Acting Patriarch Aram Ateşyan serves as the leader of the church that, apart from its religious role, functions as an institution uniting the community.

Prominent figures of the community outside the church have noticeably rallied for the election of the new patriarch who would replace Patriarch Mesrob II but a persistent opposition by Ateşyan stalled the process according to some figures in the community.

Bishop Sahak Maşalyan announced his resignation earlier this week through a letter published in Agos. Maşalyan accused Aram Ateşyan of delaying the elections that would be held if the council and local authorities approve.

Maşalyan says Ateşyan resisted the election of a new patriarch and "acted alone" when he announced he would not apply to the authorities for permission for a new election last month. Maşalyan said in his letter that the election process could have been "accelerated" by cutting the red tape but Ateşyan had prevented it.

"Ateşyan used his position as acting patriarch to abuse his duty and caused the seat of the patriarch to be left empty for nine years, the first time in the history of the Armenian church," Maşalyan said.

The community members agreed to hold elections last year and seek permission from the local authorities, a red tape process for the elections but no timetable was set, to the chagrin of opponents of the post of acting patriarch instead of a permanent one.

Speaking to Daily Sabah last November, Markar Esayan, a Turkish Armenian lawmaker for the ruling Justice and Development Party (AK Party), has said that failure to elect a new head of the patriarchate "posed a problem for people" as the democratic structure of the Armenian church based in Istanbul is a rarity in the world.

Under the election process, an official will be elected to oversee the election. The community will elect delegates who will pick a candidate for the post in the later stages.

Like other non-Muslim communities whose population dwindled over the years due to a lack of rights and oppressive state policies in the past, the Armenian community saw a reinstatement of their rights such as the return of properties once seized by the state. However, the election of a new patriarch remained a thorn in the side of the community. Armenian groups even staged a rare protest for the elections last summer to protest the "made-up title of acting patriarch" and electing a new religious leader.

The Armenian patriarchate was established in Istanbul after the city's conquest by the Ottoman Empire, and oversees Armenian churches throughout the country.