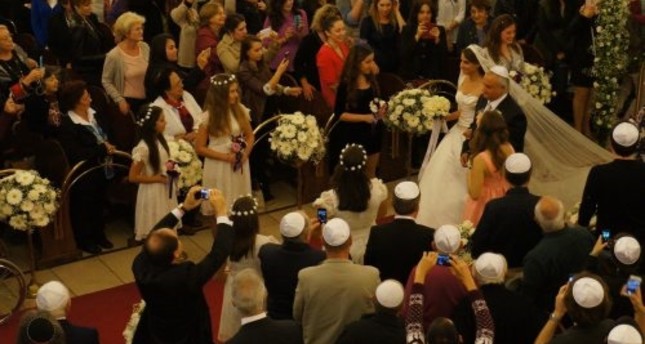 Istanbul will be hosting a series of events on Nov. 5 to celebrate Jewish culture and heritage in Turkey, as part of the European Days of Jewish Culture activities.

The events, which will be open to the public, will include music concerts, interviews, book promotions, documentary screenings, exhibitions and a theatrical representation of a Jewish wedding at the Neve Shalom Synagogue.

Guests will be able to taste local Jewish delicacies and dishes.

Ottoman Turkish Sefarad Culture Research Center Director Karen Gerson Sharhon will make a presentation on Sephardic music, after which there will be a concert by Yako Taragano and the Sephardic Psalms Choir.

Producer İzzet Bana, music director and orchestra conductor Yusuf Cefi Sağlamlar, soloists Cenk Rofe and Ediz Bahar, aand Estreyikas D'Estambol Children's Choir will be part of a "From Pop to Musicals, A Journey through the Classics."

In the "Living Library" event, members of the public will be able to learn everything they ever wondered about Jews and Judaism.

Dr. Siren Bora's book "Anatolian Jews" will be promoted during the festivities. He will attend a symposium before signing his book.

Aaron Nommaz will talk about his book "Jewish Spy Jozef Nasi," while Selin Feldman Nahmiyas, İdil Hazan Kohen and Ester Almelek will be signing their books.

A cartoonist from the local Shalom newspaper, İzel Rozental, will attend the presentation "I'm Turkish, Jewish and a Cartoonist," before signing his books.

Turkey has been celebrating the European Days of Jewish Culture since 2001.