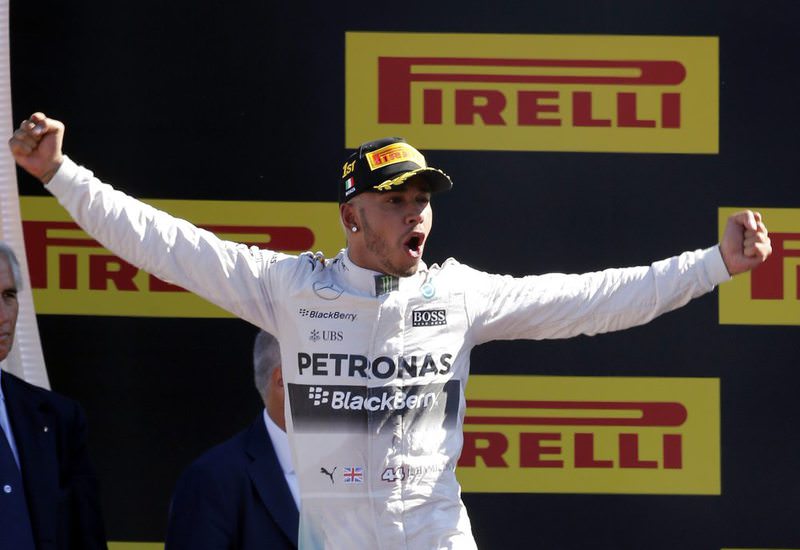 Lewis Hamilton won the Italian Grand Prix in Monza on Sunday with a 53-point lead over Nico Rosberg, though he faced an inquiry over tire pressure after the race

A red-hot Lewis Hamilton won the Italian Grand Prix to take a 53-point lead in the Formula One championship on Sunday after Mercedes team mate and closest rival Nico Rosberg retired with his car in flames.

However the Briton faced a post-race stewards enquiry for low tyre pressures at the start, with the possibility of a time penalty being imposed.

Ferrari's Sebastian Vettel took second place, 25 seconds behind the reigning world champion, to give local fans something to cheer as they flooded the track in a wave of red for the podium ceremony.

Brazilian Felipe Massa took third for Williams, crossing the line 0.3 of a second ahead of his Finnish team mate Valtteri Bottas.

The win was the 40th of Hamilton's career, one less than the career tally of his boyhood hero Ayrton Senna, and seventh of the season as well as his third in Monza.

"This weekend's been just fantastic, a perfect weekend for me," said the Briton, who dominated practice, started from pole position, led from the first corner and set the fastest lap.

"I don't know if I have ever had a weekend like this. This circuit is such a special one for me...when you stand on top of that podium you feel an incredible pride, incredibly proud to be amongst the greats who have stood there.

"The sea of fans is just unlike anything I've seen."

If his race was untroubled, there were concerned faces afterwards at Mercedes when stewards reported that the left rear tyre on Hamilton's car was 0.3 PSI below the minimum starting pressure specified by Pirelli.

A team representative was summoned to the stewards, with fears he could face a penalty that might wipe out his advantage over Vettel, and possibly more.

"I've no idea what that might be," Mercedes motorsport head Toto Wolff, whose team had ordered Hamilton to push in the closing laps to increase his lead, told the BBC.

Rosberg's tyre had even less pressure but the German was past caring, his hopes literally going up in flames when the German pulled over two laps from the end with smoke and flames billowing out from the rear of his car while in third place.

A pre-qualifying problem had forced Rosberg to start the race with an engine that had previously done five races, while Hamilton had a fresh one with upgrades for the fastest circuit on the calendar.

The German had started fourth but lost places taking evasive action when Ferrari's Kimi Raikkonen, on the front row with Hamilton, struggled to get away with cars swerving around on either side.

The Finn was last into the first corner but fought back to take fifth place.