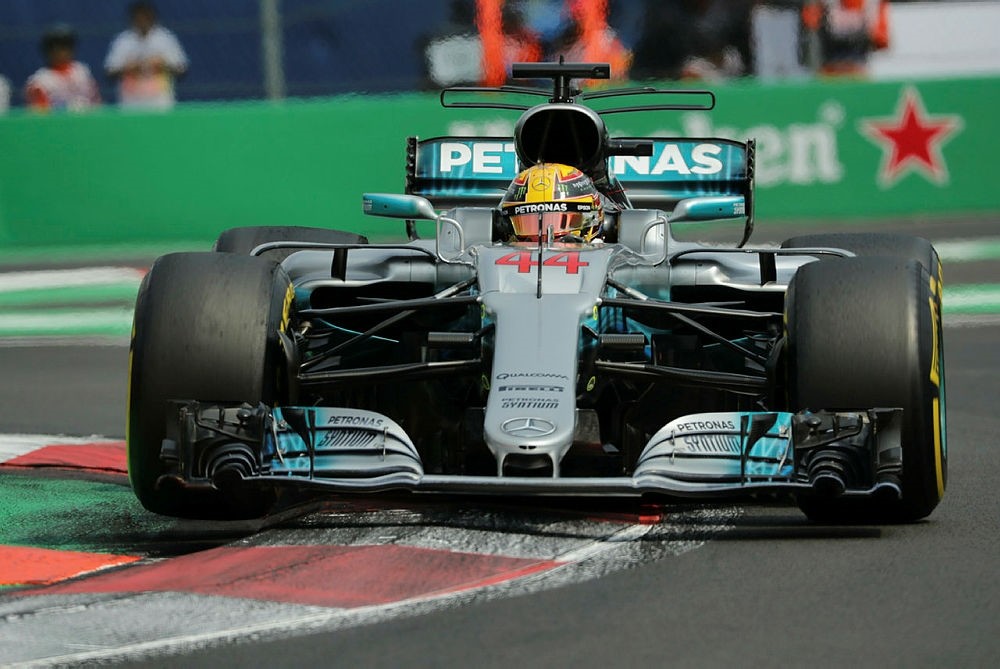 Lewis Hamilton of Mercedes during the Mexico Formula One Grand Prix at the Hermanos Rodriguez racetrack, in Mexico City, Mexico, 27 October 2017. (EPA Photo)
by Associated Press Mar 14, 2019 10:41 am

Lewis Hamilton grabbed the British Union Jack for a "victory" lap, and then draped it over his shoulders. There was no way he was going to let it go.

Hamilton won his fourth career Formula One championship Sunday with a ninth-place finish at the Mexican Grand Prix, a rare finish away from the podium but one good enough to win a title that makes him the most decorated British driver in history.

"It's been a long journey," said Hamilton, who won his first championship in 2008. "This week I've been reminiscent of where I came from, dreaming of being in Formula One."

None of it came easy Sunday in a race where he had to overcome a first-lap tire puncture and scramble to finish off title rival Sebastian Vettel of Ferrari. It was a bump from Vettel shortly after the start that made an expected title more stressful than anyone at Mercedes expected.

The ninth-place finish was Hamilton's worst of the season, but it also closed out Vettel with two races left.

"Not the race you wanted, but who cares?" Mercedes boss Toto Wolff radioed Hamilton after the race.

Hamilton also passed his idol, Brazil's Aryton Senna, who won three titles before he was killed in a crash and is still considered one of the most skilled drivers in F1 history.

"It's crazy to think I continue to put the Hamilton stamp, the Hamilton name, in the history books. Beyond my time there will be kids that read my name," Hamilton said.

Red Bull's Max Verstappen got the win in Mexico for his third career victory and second this season.

Vettel made it an adventure for everyone.

The German started in pole position and the beginning was a furious sprint through the long straight at the Autodromo Hermanos Rodriguez. Verstappen got the edge through the first turn and Hamilton made a move to get past Vettel, who drifted left. Vettel's left front wing clipped Hamilton's right rear tire, damaging both cars and forcing both drivers to the pits for repairs.

Verstappen disappeared into the distance as a seething Hamilton asked his team over the radio if Vettel made contact "on purpose."

"Not sure, Lewis," the team replied. Race stewards determined no investigation was necessary.

Vettel had to finish first or second to push the championship to the next race in Brazil. Both drivers made a mad scramble to get back toward the front, weaving through the traffic on the short track. Hamilton was struggling and on lap 23, he was so slow he was shown a blue flag, the humiliating order to let a faster car — Verstappen — go past him.

"I knew the car was good. I didn't know it would be that good," Verstappen said.

"Throughout the race, I was thinking don't give up," Hamilton said.

Vettel pushed hard but finished fourth and the title chase was over. Late in the race, Vettel asked his team if he could get second, but when told how far behind he was, Vettel replied, "Oh mama mia, that's too much."

After their cars crossed the finish line, Vettel drove alongside Hamilton and applauded. Hamilton seemed momentarily overwhelmed, placing his helmet in his hands.

"He's done a superb job all year round and deserves to win the title. So congratulations to him. It's not about anyone else today, it's about him. It's his day," Vettel said.

Although denied the podium, the finish allowed Hamilton to celebrate championships in four cities over his career, with Mexico City joining Sao Paolo, Brazil, in 2008, Abu Dhabi in 2014 and Austin, Texas, in 2015.

"Viva Mexico!" Hamilton told the crowd when he got out of his car.

Hamilton's championship will spur debate about his place among the best drivers in F1 history. His Mercedes car and team have dominated the era of turbo-hybrid engines adopted in 2014. Of Hamilton's 62 career victories, 40 have come over the last four years, a span of 77 races.

He chased down this championship over the second half of the season after Vettel won two of the first three races. Ferrari faltered as Hamilton racked up five wins over the past seven races. His car has been as steady as his driving, with Hamilton finishing every race.

"This was a championship I was hoping for, fighting another team," Hamilton said.