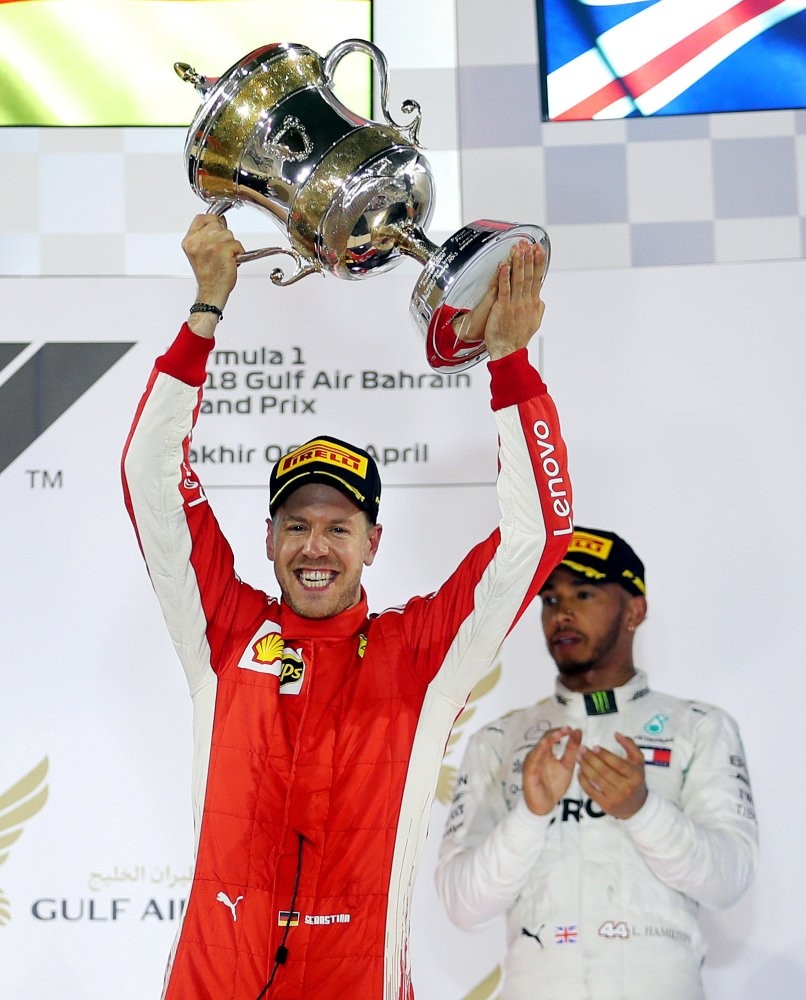 Ferrari's Sebastian Vettel celebrates winning the race with the trophy as Mercedes' Lewis Hamilton looks on.
by Mar 14, 2019 10:41 am

Sebastian Vettel has two wins out of two races in the F1 season and has history on his side as Ferrari dreams of it's first world title since 2007, but it was a close win in Bahrain and rival Mercedes is ready to bounce back on Sunday in China

Ferrari president Sergio Marchionne praised Sebastian Vettel by saying he drove like "a real champion" in his victory at Sunday's Bahrain Grand Prix, and the omens are indeed good that Scuderia could celebrate it's first driver's title since 2007. Vettel added first place in Sakhir to the top spot from two weeks ago in Australia as a risky tire strategy paid off to beat the Mercedes duo of Valtteri Bottas and Lewis Hamilton. The German and his team have history on their side, as no driver has failed to win the championship after winning the first two races in 36 years - since Keke Rosberg won the 1982 title after Alain Prost topped the first two grands prix. Vettel would have none of it, saying: "Well, they had less [sic] races in 1982. I don't believe in all those things. Sometimes they work for you, sometimes against you."

Ferrari were keeping their feet firmly on the ground - since Vettel's win was overshadowed by a botched pit stop for Kimi Raikkonen, in which a mechanic broke his tibia and fibula bones, and the Finnish driver was forced to retire instead of fighting for the podium. Ferrari was subsequently fined 50,000 euros ($61,400) for an unsafe release.

"This grand prix confirms that the Scuderia has a great car, a solid team and two drivers on top form. But it also showed how close things are between us and our rivals, who are very strong," Marcionne said.

"It's worth pointing out that there is still a long way to go and we have to maintain a high level of concentration, continuing to work diligently and with passion, which is something we are well capable of."

Ferrari showed great pace all weekend and there would have been no guarantee at Mercedes of a Hamilton victory even if he hadn't been forced to start from ninth place after a grid penalty.

Mercedes, however, seemed on course for a one-two from Bottas and Hamilton when Vettel chose soft tires for his second stint, which indicated he would need a second pit stop.

But the German made the tires last beyond their expected lifespan in a risky change of strategy as he managed to hold off a charging Bottas in the last lap to make Mercedes' one-stop strategy fall short, saying afterwards: "It worked - just."

Vettel was pleased overall with the team's progress after he had complained in Australia - where he won because of a Mercedes strategy error - that he didn't feel comfortable in the car. "I had a better feel with the car. It was more consistent on one lap but also in the race. So, I felt just healthier and more in control," he said.

But even though they appear on par with Mercedes, no one at Ferrari will disagree with the assessment from Mercedes motorsport chief Toto Wolff that "we will see the competitive balance swing from track to track this season." This promises an intriguing battle with 19 races still to come, the next being Sunday's Chinese GP in Shanghai, where Hamilton is out to turn the tables, having previously claimed five top spots there to Vettel's one. "Shanghai has always been a good hunting ground for me, so I really hope that we can go there with some strength," Hamilton said.