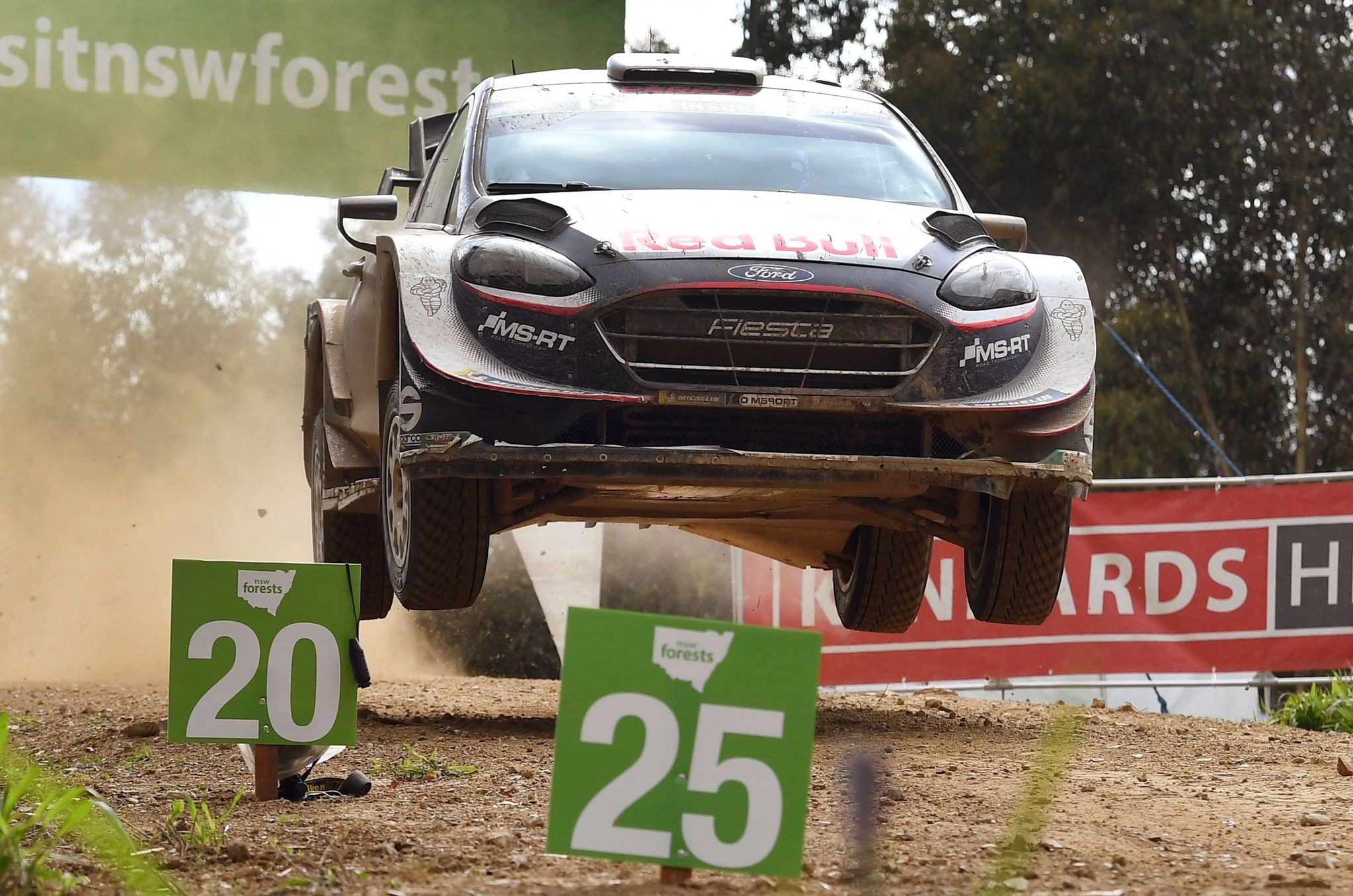 Sebastien Ogier of France speeds over a brow on the final day of the World Rally Championship.
by Nov 19, 2018 12:00 am

Dominant Frenchman Sebastien Ogier clinched his sixth world rally title yesterday in a gripping final race of the year at Australia, denying Belgian Thierry Neuville and Estonia's Ott Tanak maiden crowns. In one of the closest seasons of recent times, the M-Sport Ford driver came to Coffs Harbour with a three-point cushion over Hyundai's Neuville and 23 in front of Toyota ace Tanak. All he needed to do was stay ahead of the Belgian and in touch with Tanak over the three days of frantic driving along dusty and slippery roads. The experienced campaigner and his co-driver Julien Ingrassia did just that, getting an early edge when Neuville lost 40 seconds on day one after blowing a tire.

When Neuville swiped a bank and ripped a wheel from his car and Tanak clipped a tree, forcing their retirements as they took risks in a desperate bid to make up time on Sunday afternoon, the title was his before the rally finished.

Ogier admitted he drove some of the stages yesterday "like my grandma would do," knowing any mistakes could be costly at a race won by Finnish Toyota driver Jari-Matti Latvala, 32.5 seconds ahead of New Zealand's Hayden Paddon in a Hyundai. "It's been an incredible season, so tough, and this is so emotional," said the Frenchman, who finished fifth in Australia. "I am so proud of what I have achieved and so proud of our team. We've had an amazing journey together."

He has now won six titles in a row to move within three of the greatest driver ever, fellow Frenchman Sebastien Loeb, who claimed nine on the trot between 2004-2012. It was his last race for Ford ahead of a switch next year to Citroen on a two-year deal. He was part of the Citroen team between 2008-2011 before decamping to Volkswagen between 2013-2016 when he won four world titles, and then M-Sport Ford where he won his fifth and sixth.

The rain that had been forecast for the region finally arrived early yesterday, leaving the forest roads treacherously slippery, as overnight leader Tanak found to his cost, sliding into the trees on stage two of the day.

He lost 12 seconds with teammate Latvala taking the overall lead in a race that the Estonian had to not only win but also claim bonus points in the event-closing stage to have any hope of eclipsing Ogier. The measured Frenchman was taking no risks, unlike Neuville who touched a bank while pushing hard and then had exhaust trouble in morning action. Despite this he managed to chip away at the lead, but it was ultimately futile. The Belgian needed to haul back 39 seconds over the final three stages but he stopped on the third-last stage with damage to his car, and when Tanak failed to finish the penultimate stage, Ogier was champion.

"We've been giving everything and took some risks to try to get the title," said Neuville.

"We had nothing to lose anymore. In SS22, the conditions were really bad. We went wide, clipped a tree, damaged our car and had to retire."