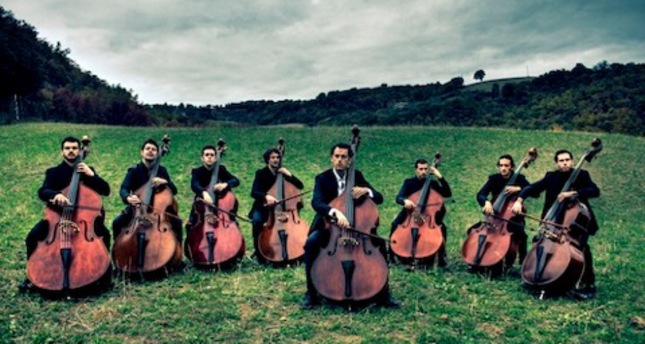 by Daily Sabah Jan 01, 2015 12:00 am
Founded by three young musicians, the Ludus Ensemble will take Istanbulites on a journey beyond time and place through their incredible stage performance on Jan. 7, 2015 at Akbank Sanat. The Ludus Ensemble, composed of violinist Banu Selin Aşan, cellist Seren Karabey and pianist Elif Gökçe Tuğrul, will share the diverse world of classical music with the audience by performing compositions from all over the world. The Ludus Enseble was established in 2013 by three young musicians from Mimar Sinan Fine Arts University in Istanbul. As classical music performers living in Istanbul in the 2000s, Aşan, Karabey and Tuğrul are well aware of the fact that the borders between countries and cultures have long become transparent and the art of the present and the past enrich each other. Playing compositions from different regions makes the band members feel like time and place are constantly changing. They chose Ludus, which means "game" in Latin, for the name of their band. Aşan, who was granted the second prize in Gülden Turalı Violin Competition in 2008 and was awarded a scholarship from the Turkish Education Foundation, continues her master's education focused on chamber music at Hochschule für Musik und Theater in Hamburg with Professor Niklas Schmidt. Karabey was accepted into Professor Reşit Erzin's cello master's class at Mimar Sinan Fine Arts University and performed Haydn's Cello Concerto in D major with the Istanbul Clarinet Choir in 2010. Karabey currently continues her education at Hochschule für Musik und Theater.

Tuğrul performed alongside with Moscow State Symphony Orchestra at the Tchaikovsky Conservatory Grand Hall in 2004 as part of the 10th Moscow Youth Festival as well as at the Bayreuth Piano Festival in 2008. She also studies chamber music at Hochschule für Musik und Theater with Professor Schmidt.