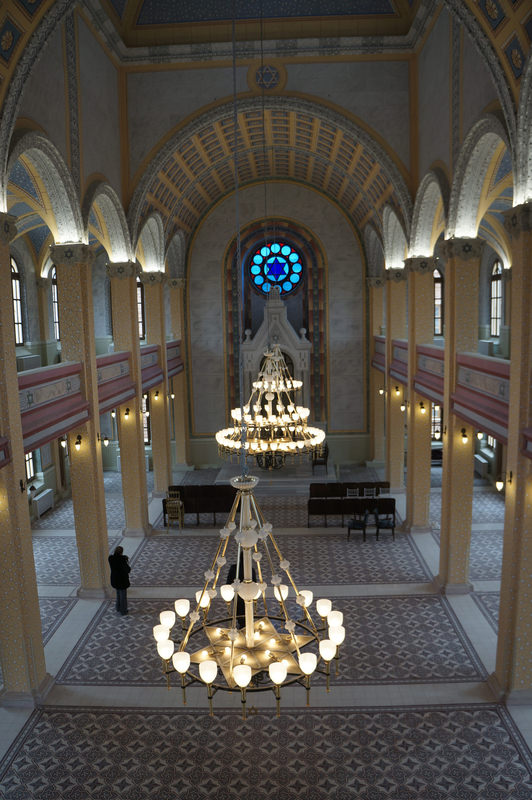 The Great Synagogue in Edirne, which was restored and re-opened this year, prepares to host a concert featuring 12 compositions by Turkey's Jewish musicians

The Great Edirne Synagogue, or Kal Kadoş ha Gadol, which is one of the biggest synagogues in Europe, is hosting a concert featuring the works of Jewish composers on Oct. 18. Speaking to Anadolu Agency (AA), the regional director for foundations, Osman Güneren, said the synagogue will host its first concert as a part of culture and art events that have been taking place following the restoration of the Jewish temple. Stressing that the Great Edirne Synagogue previously hosted exhibitions, Güneren said: "The works of Jewish composers will be performed by the Culture and Tourism Ministry's State Turkish Music Ensemble. This concert will be a first and a continuation of culture and art organizations hosted by the synagogue. The concert will be overseen by Turkey's Jewish community as well as guests from Istanbul and Edirne."

The concert titled "Gülzar" will feature 12 compositions from Tamburi İshak, İshak Varon and Mısırlı İbrahim Efendi. Apart from the performances, the concert will provide insights into the lives of the composers as well. Also speaking to AA, Halil Arsever, a soloist in the Edirne State Turkish Music Ensemble, said: "Each composer is an important figure for Turkish music; however, İshak - who was the tambour instructor of Ottoman Sultan Selim III - has a different place in the history of Turkish music." Arsever added that the atmosphere and acoustics of the synagogue are beautiful, stressing that they have been preparing for the concert in order to offer the audience a beautiful evening with delightful music.

The Great Edirne Synagogue was built in 1905 on the order by Sultan Abdülhamid II to replace 13 separate synagogues destroyed by a huge fire that devastated the city. The building was designed by French architect France Depre, who looked to the Vienna Synagogue for inspiration, and opened in 1907 to serve as a house of worship. Sephardic Jews who took refuge in the lands of the Ottoman Empire and other Jewish communities came to Edirne and established their own neighborhoods. About 20,000 Jewish people were living in Edirne and the neighboring cities at the time it was built; however, when the Jewish community began to leave Edirne for good, the synagogue was closed in 1983.

As a part of the synagogue's restoration, the General Directorate of Foundations repaired the collapsed roof of the building, which had collapsed due to negligence and snow accumulation, and cleaned the interior of the synagogue. The four-year-restoration of the Great Edirne Synagogue, which was restored to its former likeness with an interior and exterior makeover, cost TL 5,750,000 ($1.98 million). The synagogue reopened with a ceremony overseen by Deputy Prime Minister Bülent Arınç, General Directorate of Foundations Director Adnan Ertem and the head of Turkey's Jewish community, İshak İbrahimzadeh, on March 26.

The synagogue features architectural characteristics of the Leopoldstadter Tempel, once the largest synagogue in Vienna. Edirne is believed to be the birthplace of the Maftirim repertoire, mystic Sephardic Jewish music. Restoration of the synagogue was one of the ambitious projects undertaken by the government, which seeked to restore the rights of the often neglected minorities of the country, to promote coexistence after decades of policies supressing minorities' rights.
Last Update: Oct 16, 2015 2:47 am