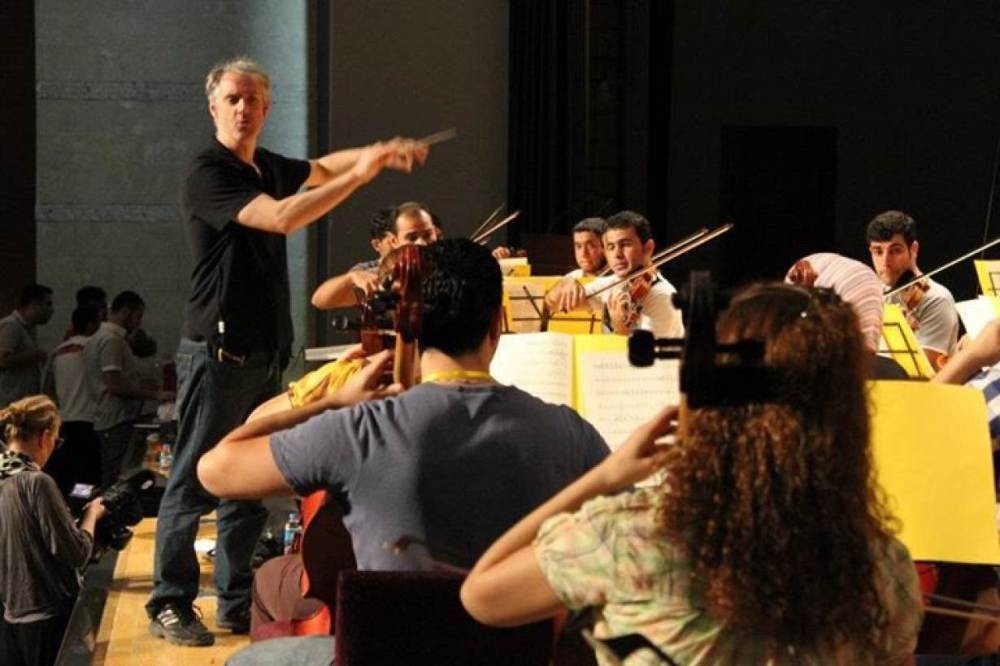 by Aug 29, 2016 12:00 am
For nearly six years, young Iraqis defied the war, coming from all over the country to play in an orchestra, but the emergence of DAESH has dashed their dream of making music to bridge deadly sectarian divides.

The Iraqi National Youth Orchestra's story is told in a memoir by Paul MacAlindin, the band's conductor from its founding in 2009 until it was forced to stop playing in 2014, an end that left him "devastated and empty and very, very broken."

MacAlindin, a Scottish musician, was eating fish and chips in an Edinburgh cafe when he saw an appeal in the local newspaper from a 17-year-old Iraqi pianist, Zuhal Sultan, for a maestro to put the orchestra together.

At that point, in 2008, MacAlindin knew little about Iraq or the challenges of playing classical music in a country devastated by more than a decade of war.

"I knew pretty much what everyone else in the general public knew, which was that Iraq was a war zone," said MacAlindin, who took the job that was funded by, among others, the British and German governments.

With much of Iraq too dangerous for MacAlindin to get to in order to meet potential players, the musicians were sought on Facebook and auditioned via YouTube.

Most had learned to play by watching videos online in the first place. "There was no teaching to speak of," said MacAlindin, now 48, who before taking up the Iraqi baton had conducted orchestras and ensembles from New Zealand to Germany.

The National Youth Orchestra of Iraq eventually met in 2009 for a summer school, the first of many rehearsals and concerts for which MacAlindin would fly in to conduct.

His proudest memory is their first concert, following two weeks of "orchestral bootcamp" with a team of translators to help the Kurdish and Arabic speakers communicate with their maestro and each other.

"We proved that it could be done. We also proved that we were resilient enough to see the course through to the end," he said.

"And despite all the very large differences between us, we held ourselves together and nobody walked out."

Beethoven's Prometheus Overture, Haydn's Symphony No. 99, and - to represent the ethnic mix of the orchestra - Kurdish and Arabic Iraqi pieces made up the repertoire that night and the orchestra went on to play in Britain, France and Germany.

As well as nurturing musical talent, the orchestra brought together people aged between 18 and 25 from all over Iraq.

"We had no interest in the politics or religion or all the other things that divide young people against each other in Iraq.

"We were simply together making music. That built trust, and it allowed friendships to foster in the orchestra that wouldn't under any other circumstances be possible."

But since the orchestra's collapse in 2014, the year DAESH group declared sovereignty across swathes of Iraq and Syria, MacAlindin is pessimistic about its future.

"The whole country is in such a state of trauma that the possibility of anybody fulfilling their personal potential and contributing culturally to a nation - it's just not happening," he said.

Back in Iraq, the orchestra's former members are trying to keep making music.

"Because they've already lived through a war, they know from hard experience that people die around them every day and they have no choice: to either give in to that despair, or stay positive," MacAlindin said.

His memoir "Upbeat" was published in Britain on Aug. 18.