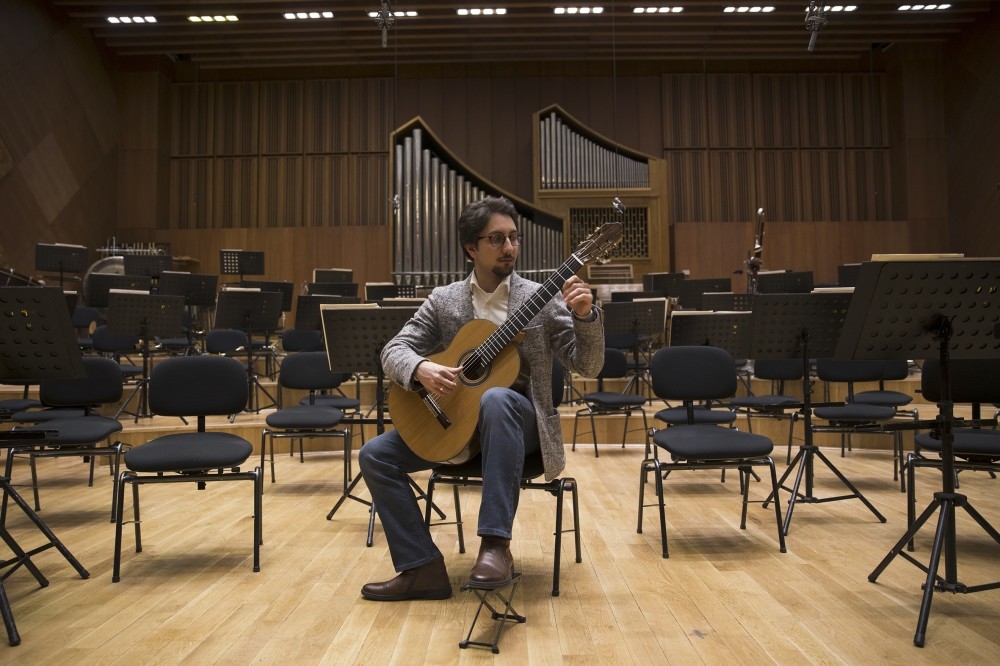 Presidential Symphony Orchestra soloist Celil Refik Kaya has won great awards at international organizations from a relatively young age. He says he is inspired and influenced by the cultural richness of Turkish culture

Having started his musical career at the young age of six and achieving great international success early in his musical career, Celil Refik Kaya said, "Turkey contributed a lot to me as the richness in our culture and music is reflected in my work in classical music."

Speaking to Anadolu Agency (AA) before his concert in Ankara as the soloist of the Presidential Symphony Orchestra, Kaya, 26, noted that he made history as the youngest winner of the JoAnn Falletta International Guitar Competition, one of the most prestigious guitar concerto competitions in the world organized in New York in 2012. Moreover, he was the first Turk who received the Guitar Foundation of America, which again is one of the most renowned solo guitar competitions in the world.

Thanks to his father, Dr. Mehmet Refi Kaya, Kaya started playing classical guitar at the age of six and continued his work with guitarists Yusuf Doğan Büyüköğüt and Raffi Arslanyan. He completed his degree in three years at Mimar Sinan Fine Arts University's State Conservatory, during which he won many competitions along with a scholarship in the U.S. He completed his master's degree at the New York Mannes College of Music and his international career peaked right afterwards. He continued his doctorate studies in the magnificent guitarist Adam Holzman's class as both a tutor and an assistant at the Harrington Fellowship, the most prestigious program at the University of Texas at Austin.

He decided to stay in academia after completing his studies and became known as "the conqueror of competitions" as he always came first in every international competition he attended. According to Kaya, his success is due to hard work. He continues to attend competitions each year and notes that such competitions provided him with many career and concert opportunities.

Kaya is also a composer and uses Turkish music, especially modes such as "hüzzam," "hüseyni" and "uşşak" of traditional Turkish music in his work. His recommendation to young people interested in music is for them to know that it requires a lot of time and effort and in order to become a professional, they need to make great sacrifices. "I work really hard and try not to waste my free time. I've been abroad for a long time, which means I rarely see my family, which is a compromise on its own," Kaya said, and added that he works with extreme discipline before he enters competitions, sometimes eight to nine hours or even 10, just like an athlete, with an athlete's discipline.

Kaya also added that as his doctorate studies are continuing, he does not have much time to practice and mostly practices when he will be entering a competition. "Other times, I try to read books to calm myself, see friends and try to socialize," notes Kaya.

Touching on how there are up-and-coming Turkish guitarists even though the art is relatively new in Turkey, Kaya said there is great progress in Turkey in this regard and the new coming guitarists will be examples to future generations.

"If a person is an artist, they are extremely grown physically and spiritually as music is the food of the soul, just like all other kinds of art and I believe art is very crucial for societies to improve, especially these days when a lot of negative events are taking place all around the world," said Kaya. He also underlined the importance of going to concerts and exhibitions, since becoming involved in art as it is a great way to unwind.
RELATED TOPICS