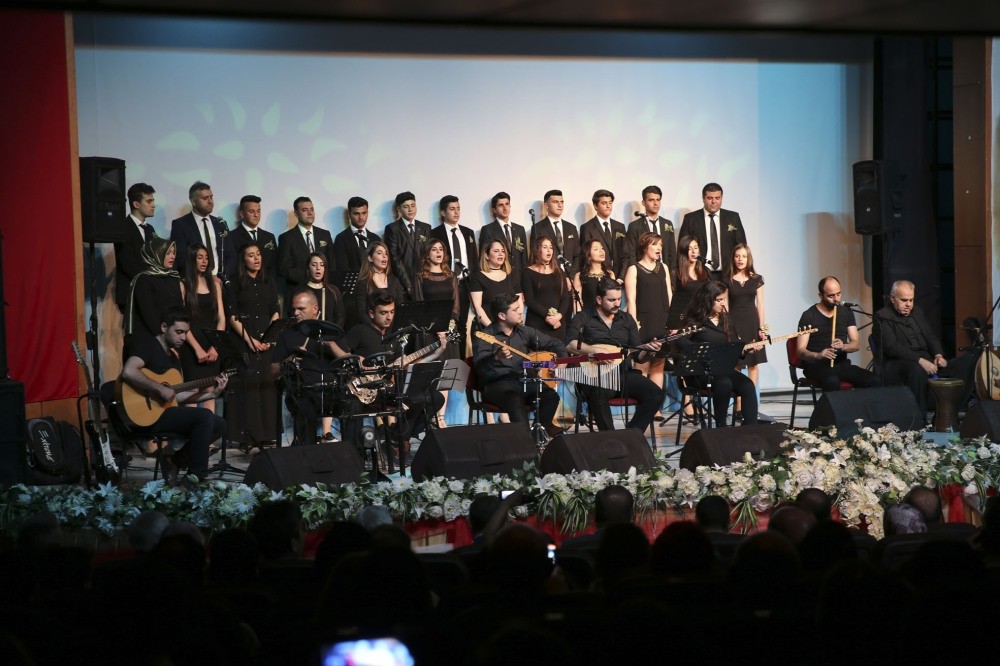 by Anadolu Agency May 12, 2017 12:00 am
The Olive Branch Choir, which was founded under the District Governorate of Altınözü and the Public Education Center in Hatay province, and includes 40 people from three monotheistic religions as well as different backgrounds and professions, will promote peace around the world with their songs.

The choir aims to extend an olive branch to humanity through their concerts held in Turkey and different parts of the world.

The choir has rehearsals two days a week at the Public Education Center, boasting songs in different languages, including Turkish and Arabic, among their repertoire.

Inviting humanity to promote peace with their songs, the choir expects concert proposals from Turkey and abroad.

Speaking to Anadolu Agency, District Governor of Altınözü Bülent Uygur said that Anatolia has been "a peaceful harbor" for humanity for thousands of years and people have been sheltering in this region when they have to flee their homelands due to various problems. Uygur also added that the district of Altınözü is a reflection of the 81 provinces of Turkey.

He said that they decided to found the choir last year, saying: "Our choir reflects Turkey in the sense that it has people from different religions, sects and ethnicities speaking different languages. Altınözü has one of the biggest Christian populations in Turkey on a local basis. Two neighborhoods of the district especially - Satılar and Tokaçlı - have a big community of Christians. Our choir has also Christian, Muslim, Alevi, Sunni, Arab and Turkish members. They create a unified Anatolian melody together with their songs," he said.

Uygur said they aim to raise awareness and artistic sensitivity. "Our primary aim is to give people hope for the future and expand the limits of tolerance," he said, adding that the choir started its concerts in Hatay first, but now are planning to have concerts in different cities around Turkey and in different countries.

Choir conductor and music teacher Ümit Tokgöz also highlighted the diversity of the choir, saying that they have people from different professions, religions and sects.

"Each person in the choir is different, and they create these melodies together. We want to show our district's cultural diversity through our music to both Turkey and to the world. Of course, peace is our primary aim," he said.

Çobanoğlu said he became a member of the choir three months ago and that they all have a great time together with choir members and feel like they are brothers and sisters. "We have friends from different religions or sects in the choir, but there is not any discrimination between us. We are like a family and want to show the world that it is possible," he said.

Another choir member and teacher, Seda Gül Gündüz, also said that they aim to promote peace, love, harmony and unity for the world.
RELATED TOPICS