Young Turkish musician with ‘skills of Mozart’ to perform in Ankara 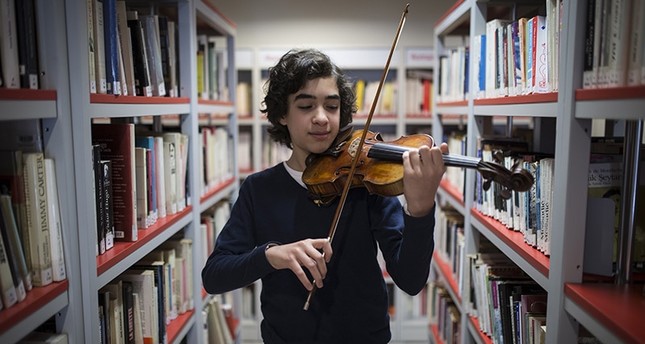 A 14-year-old internationally acclaimed Turkish musician is visiting the capital Ankara, the city where he once lived, to meet music lovers.

Bartu Özsoy, who is currently studying music in the French capital Paris, will perform at the Hacettepe Conservatory Concert Hall on Friday at 7 p.m. local time in Ankara.

When he was 10 years old he won a solo audition and performed his first concert with the Izmir State Symphony Orchestra.

A video of the concert was seen by a Paris Opera Orchestra artist and professor, Thierry Huchin who offered to train Özsoy in Paris.

The boy, who has been studying music since he was 4 years old, accepted the gracious offer and his family moved to Paris.

Speaking to Anadolu Agency he said he has performed at several concerts and recitals in Paris and other European countries.

"I am working to become a successful virtuoso violonist. I want to become maestro, a composer and well-known violin virtuoso in the future," he said.

"I have already started writing a symphony. I am writing my symphony just like the compositions in the beginning of romantic and modern period," he added.

He said he will work to revive music, and added that he has also started writing a violin concerto.

Özsoy has won several national and international awards. When he was only 8 years old he received a certificate of high achievement from the Associated Board of the Royal Schools of Music for the level 5 violin exam, and a level 5 theory exam a year later.

His father Berke Ozsoy said that they realized his musical talent when he was very young.

He said that his son's teachers say that he has the "skills of Mozart."

"He has a retentive memory. He can remember many pieces by heart," he said.