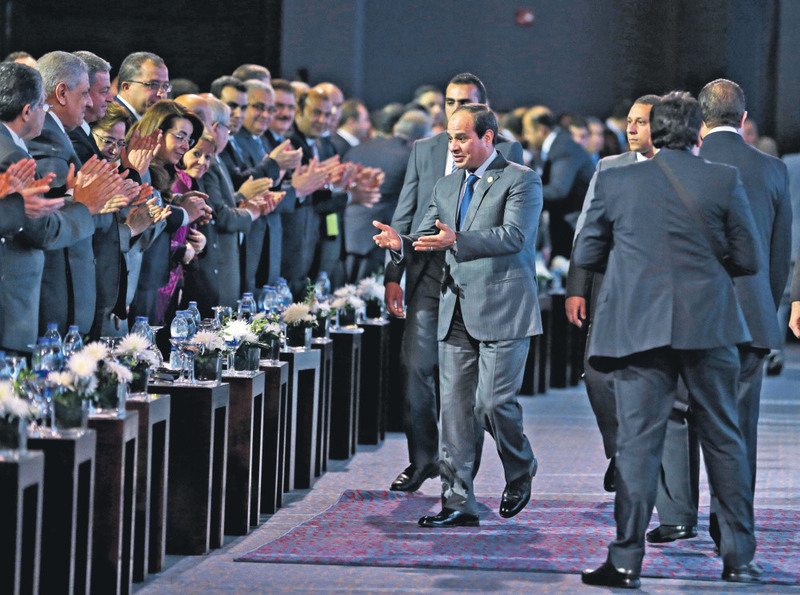 The economic model of el-Sissi is directly linked with the guarantees for his authoritarian rule. The business elites that have been supporting el-Sissi and previous dictators are the same ones that will get shares and partnerships from the upcoming projects

Egypt's recently held investment conference called "Egypt the Future" has attracted more than 2,000 international representatives, many heads of state, ministers and heads of international monetary and financial institutions, multinational companies, individual investors and observers. Had Egypt not been a country, the economic summit would have been considered the greatest success for any business entity in the world. Two testimonies gave great relief to Egypt's current administration. One, IMF Managing Director Christine Lagarde has approved Egypt's current trajectory of development as right and sustainable. She gives credits to President Abdel-Fattah el-Sissi who introduced required reforms, restored confidence and attracted investment towards making sustainable growth. Reforms such as introduction of value added and other taxes and a cut in gas subsidies are the basis for her testimony. The second testimony was given by the United Kingdom whose British Petroleum has signed a $12 billion investment deal, the West Nile Delta, the single largest investment deal in Egypt's history. British officials think that there is now the "right environment" for British investment for which they had been looking for a long time. BP aims to develop 5 trillion cubic feet of gas resources and 55 million barrels of condensates, with production expected to begin in 2017. Among other important achievements are investment pledges made by Saudi Arabia, Kuwait and the UAE, which have promised $12 billion in investments and donations for the next few years.

Major questions come to mind: Who will evaluate, monitor and approve these investments? In Britain, like many other countries, any foreign investment confirms a law that is approved by none other than its legislative bodies. How come the International Monetary Fund, the World Bank and the United Kingdom found the right environment and required reform in a country where the parliament has not yet been restored to introduce, pass, or approve any law. In what way, can the new investment law of Egypt be seen as fulfilling the expectations of the Egyptian people if there is no such legitimate mechanism to do that. The so-called new investment law of Egypt is an amended version of an earlier law that is held responsible for stifling foreign investments. By trimming corporate taxes to 22.5 percent from as high as 30 percent previously and dropping sales taxes to 5 percent from 10 percent, the new investment law has made foreign investment more promising. Even customs duties on equipment used for production were reduced to 2 percent. Among all concessions and exemptions for corporate groups, most important is impunity from any legal accountability. In 2014, the Egyptian court acquitted Hosni Mubarak and his sons from case filed by the public in which the Egyptian state treasury lost almost $10 billion during the period 2005-2010 due to losses exporting gas to Jordan, Spain, and Israel. A report by the Egyptian Initiative for Personal Rights (EIPR) revealed corruption in transactions involving natural gas during Mubarak's reign. In simple language, it is called corporate looting of natural resources whose benefits should have gone to the people. The new investment law introduced by el-Sisi has brought back the same or worse legal mechanism to protect foreign investors from public scrutiny. The courts will automatically refuse to take any such petition. "Invest in Egypt" provides no promises for resources' trickling down to the vast number of poor people of Egypt and does not give them any right to ask why the benefits are not coming to them.

Then there comes issue concerning what Egyptian people need and what is coming to them. Big investment pledges so far have come mainly in two sectors, gas field developments and donations for Egypt's central bank in the form of financial aid. The Egyptian minister of international cooperation expected that half the projects Egypt would propose at the investment summit would be in the energy sector. Other important sectors such as transport, agriculture, irrigation and a Suez Canal logistics hub, infrastructure development and information technology might not be attracting much attention. The message of this summit is that Egypt is not a land of 80 million people who have a great history and civilization and who have natural rights to their resources, which can be sold to any foreign individual or group. In all extraordinary discussions, nowhere are the people's rights mentioned. The exploitation of laborers in formal and informal sectors is rampant in Egypt, and Egyptians workers have been protesting for their rights. This conference lacks a vision to diversify the country's economy from being a neo-patrimonial rentier economy to a fully diversified economy taking its strength from knowledge production. Human resource development and small-scale entrepreneurship are not given due attention. The model that Hosni Mubarak evolved was best fit to his authoritarian governance, which is supported by the region's kingdoms and emirates.

The economic model of el-Sissi is directly linked with the guarantees for his authoritarian rule. The business elites that have been supporting el-Sissi and previous dictators are the same ones that will get shares and partnerships from the upcoming projects. Keeping elected bodies, parliament and making economic management transparent will make his government vulnerable. Egypt's rural demography will again be major victim of his economic policies in which their main role will again be contractual laborers without rights to appeal. Infrastructure projects will pull another rural migration to Egypt's upcoming new capital and other newly planned urban centers, and the cycle of exploitative migration from the Gulf to Egypt will provide stability for this regime.

This is more proof of the hypocrisy of international monetary institutions and democratic countries of the West that provide the legitimacy to loot for their own commercial interests. In the absence of credible legislative institution, their procuring gas fields in Egypt pose greater risk of internal tension between the authorities and the people. The Jan. 25 revolution had marked an end to crony capitalism run by son and father. The road to sustainable and inclusive development was long, but it had ensured the inclusion of Egyptian people on the board for all decision making. El-Sissi regime is again laying down the foundation for long-term authoritarian rule based on a modified version of Mubarak's crony capitalism.