The peace train: A new spirit 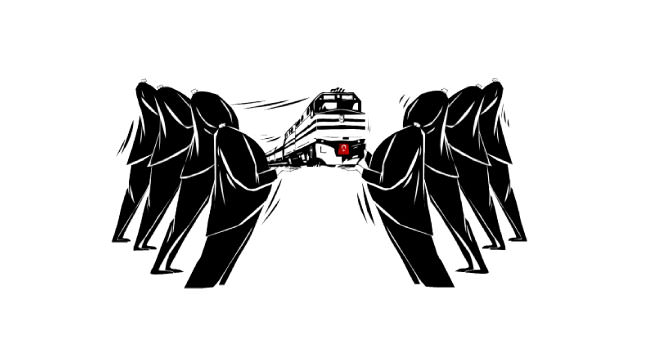 Inspiration for the peace train project came from the people of Turkey. One of the most important objectives of the project is to show that the public supports the parties working conclude the reconciliation process

The Barışa Bak (Look at Peace) Platform was founded to drum up support for the reconciliation process and to focus the public's attention on peace again, since support for the process was undermined with some governmental figures stating that the process was in turbulence after the Oct. 6-8 Kobani incidents. The foundation of the organization was publicly announced by 70 spokespeople, most of whom are journalists or writers, in November 2014 at a press meeting.

One of their goals was to facilitate civil society support for the reconciliation process and encourage other non-governmental organizations to back the process. Our first task was to visit the four parliamentary parties, the purpose of which was to strengthen the hands of the Justice and Development Party (AK Party) and the Peoples' Democratic Party (HDP) - the parties conducting the process - and to call on the other parties to contribute.

Then we sailed a peace boat. In the activism meetings we organized, we also came up with the idea of a peace train. Following a few months of preparations, we took off from Istanbul on March 11. Tuzla Mayor Şadi Yazıcı saw us off in company with a crowd from Istanbul. At our first stop in İzmit province, İzmit Mayor Dr. Nevzat Doğan organized a warm welcoming ceremony for us. We witnessed a good example showing how the reconciliation process has changed the mindset in Turkey. A conservative mayor marched 2.5 kilometers in the city with placards written in both Kurdish and Turkish. Only two years ago, attacks were organized against the Wise People Committee in the same city.

We planted our peace saplings, distributed pamphlets on the reconciliation process at stands we opened on streets, conducted street interviews and asked citizens to write words of peace on empty placards. In addition, we organized a panel that Barışa Bak signatories attended as speakers. We organized the same events in each city we visited. In Ankara, we also paid a visit to Parliament. Agriculture Minister Mehdi Eker welcomed us and paid a visit to our train at our Ankara stop.

In Kırıkkale and Sivas provinces, we came across several small-scale protests. In both cities, small nationalist groups attempted to hinder our activities. But in every city, a great majority of locals welcomed us warmly. For instance, a shopkeeper bestowed amulets upon us, saying that peace should be protected from the evil eye. Another one presented laced handkerchiefs and asked us to dance our peace halays in Diyarbakır with those handkerchiefs. Another interesting moment was when an old man named Mithat, who has a War of Independence medal and is the son of a Çanakkale war veteran, issued peace messages arm in arm with İbrahim from Hakkari, who had to leave his homeland and reside in Ankara when his village was set afire during the 1990s.

We witnessed many similar interesting and meaningful moments and had a chance to observe the support given to the process tangibly on the streets.

The activists who joined the journey were selected in accordance with the spirit of the process. People with different political views, various beliefs and different occupations gathered from all across Turkey. Before the train took off, we held voluntary education seminars. We determined our route and delegated the duties. As a result, we formed a well-matched team. We conducted pre-interviews with local administrations, non-governmental organizations and civil administrations in the cities we were to visit. We determined our panelists, prepared our equipment and finally set off on our journey. We also decided to make a documentary about the journey. We made an agreement with the Turkish Radio and Television Association (TRT), and a seven-person documentary team also accompanied us. Besides, a private TV channel made live broadcasts from the train during the whole journey.

With the peace train, one of our goals was to contribute to the reconciliation literature of Turkey, which is very peculiar and unique. When the documentary is released, we will be able to see whether we have achieved this goal. Also, when we look at news stories in the press, we see that we have achieved our target to raise public awareness.

The title of our peace train project was "Brotherhood Messages from West to East and from East to West." We received those messages directly from the people on the street. We had a unique experience, felt the pulse of society and measured the support given to peace.
Last Update: Mar 20, 2015 8:34 pm
RELATED TOPICS