Between truth and untruth: Partisanship and selective approaches to terrorism 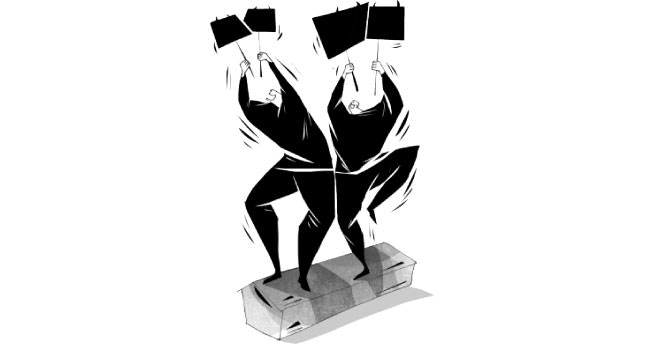 Several media outlets' reactions to the recent terrorist attacks in Turkey showed how partisanship and bigotry can distort perceptions and the transmission of truth. This was only the reflection of a much bigger problem the world is struggling with today

The recent terrorist attack in Turkey that claimed the life of a prosecutor highlighted how virtue and truth have very little meaning for some circles in Turkey and around the world. Secular newspapers in Turkey showed great solidarity and went dark after the Paris attacks, even going so far as defiantly publishing the offending images of Prophet Mohammed in solidarity with the satirical French magazine, Charlie Hebdo, despite the fact that the people of their country were offended by the images. This time, however, they refrained from even calling the event that led to the tragic murder of the prosecutor a terrorist attack until faced with strong criticism by the government and society. This was significant in terms of outlining the extent of partisanship and selective approaches to terrorism in certain circles in Turkey and the world, because there is this unwritten rule that says that leaders of countries in the Middle East have to loudly express their aversion to terrorism and terrorist attacks in the West while a mutual attitude and solidarity is denied when it comes to terrorist attacks affecting Muslim countries.

The great 14th century Muslim scholar Ibn Khaldun wrote how partisanship could have a crippling effect on the perception and transmission of truth, saying that "prejudice and partisanship obscure the critical faculty and preclude critical investigation." In his masterpiece, "The Muqaddimah," which is a must read for every enquiring mind, he elaborates on how information cannot be trusted in its plainly transmitted form without considering certain principles. Elaborating on how untruth is accepted and transmitted over centuries due to a lack of critical faculty, Ibn Khaldun emphasized the part that an infected soul plays in the acceptance and transmission of falsehood. To him, when a soul is infected with the partisanship of a particular opinion or sect, it accepts without a moment's hesitation the information that is agreeable to it. Another significant cause that he explains for humans' ignorance of truth is the weakness of the human soul for worldly acceptance at the expense of truth. The number of people preferring wealth and position over virtue or truth has always outnumbered those longing for virtue and truth, and hence why the level of ignorance for those destitute has always been an issue for humanity. Ibn Khaldun summarized this issue: "Human souls long for praise and people pay great attention to this world and the position that wealth offers. As a rule, they feel no desire for virtue and have no special interest in virtuous people."

Efforts to unearth and embrace the truth or transmit the truth have always been lesser than vice versa throughout the course of history. Again, the inclination to stand by the truth has always been weaker than standing by untruths throughout history. This is because the courage to stand by the truth has not been greater than the fear to abstain from it. On the other hand, history teaches us that the present is often a re-enactment of the past but in a different timeline with different actors and conditions. The issues that the world is witnessing today are in a way a re-enactment of the past when the causes of the issues are examined thoroughly. Unfortunately, despite the many lessons that human history harbors, people still favor the immediate, gainful and pleasurable without any care for virtue, legitimacy or the humane aspect of their goals.

In his monumental work, Ibn Khaldun outlined what is needed for a true reflection of events. However, the values that he highlighted are not only indispensable for a true reflection of events, but hold valuable information for anyone who aspires to lead a life with integrity regardless of their profession. Let us take further to heart what the first social scientist said: "If the soul is impartial in receiving information, it devotes to that information the share of critical investigation the information deserves, its truth and untruth thus becomes clear." Impartiality is one of the key principles in journalism in order to present a true narration of information to readers and viewers. For the alternative would mean deception of readers or viewers in order to realize some personal goals. This issue, which media around the world has been infected with, takes the problem that Ibn Khaldun highlights to a further dimension because beyond the false transmission of events, there is the tendency of intentionally distorting events and developments to attain certain goals. Especially with the power of social media outlets such as YouTube, Twitter and Facebook, the ability to direct crowds in desirable directions has become easier than ever. When evidence of malicious reporting is laid out to certain media circles, what is usually resorted to is attention drawn to the right to seek and pursue information and press freedoms. Ideologies or principles introduced by the West in terms of governing journalistic activities may be all fine for journalism or journalists living in the West, as no journalist will dare to incite hatred and violence in society at the expense of national interests or public order. However, it is plainly seen that when it comes to fragile countries like Turkey, there are many who latch on to every opportunity to act against what may be deemed to be in the national interests. Especially when virtue and appreciation for truth do not exist in the vocabulary of many, this becomes a more dangerous issue. For instance, the critical role that the secular media in Turkey played in buttressing coups or actively fuelling the path to various coups is well known and documented in their own coverage. The position that they took during the Gezi Park protests or during the process that led to the murder of the prosecutor is reminiscent of previous examples of attempts to instill hatred and division in society. Was it not after the horrendous coverage by daily Hürriyet that the Kurdish singer Ahmet Kaya had to flee for his life? All that the brave singer had said was that he was going to make an album that was going to include Kurdish songs. This led to a lynching campaign led by Hürriyet, which has been one of the most referred to newspapers in the West. Ironically, Hürriyet is an Arabic word meaning "freedom," but the actions of the newspaper and news agencies of the same group have so far contributed very little to freedom. Nevertheless, the media group that it belongs to claims to hold in high regard journalistic values and values for social cohesion, often accusing the current government or President Recep Tayyip Erdoğan of polarizing society. This claim could or would have been more convincing if Hürriyet was not the only newspaper that is still published with a motto that many would not hesitate to call fascist and discriminatory. The motto goes: "Turkey belongs only to the Turks," and is published on a daily basis on the front page of the newspaper. Despite the advances made in the Kurdish reconciliation process and achievements made in the promotion and recognition of different ethnic and religious groups, insisting on this motto has no rationale, and to some extent, departs from the true principles that the newspaper thrives on. In European countries where discrimination is repelled and accepted as a crime, would journalistic bodies or society in general tolerate such a motto when it is clearly offensive and hurts the feelings of other ethnic minorities? But in Turkey, Hürriyet has been publishing this motto since 1949.

Looking at the recent events in the Middle East, or the world in general, one can easily see how affairs solely based on interest and partisanship have only inflicted pain on people. Through wars on perception management, every illegitimacy, injustice, brutal act and untruth is presented as completely the opposite. The problem has gone beyond the untrue narration of history since constructed and executed histories are being written through the deception of the masses. In other words, the untrue narration of history has been replaced by constructed and distorted developments that are being written by others, but acted out by crowds who seem to only use their critical faculty, with perseverance, in questioning and challenging the truth, legitimacy and virtue. In an age when there is the propaganda that there is no absolute truth, what has been assumed as legitimate thus far is being overturned because the injection of the idea that there is no truth is working on the masses. Again, virtue, which used to have generally accepted meanings throughout the world, is now being accepted by the masses as the ability to challenge the truth. One is deemed virtuous to the extent that they fight for untruth, turmoil or trouble.

Through perception management operations, there is a selective approach as to what constitutes terror, usually with the tendency to confine terrorism to Islam alone. In the last decade or so, there have been actors - mostly statesman, and some still in power - who have murdered a countless number of people, but they have not been demonized to the extent that Islam has been demonized thus far. This issue is further exacerbated because it is only down to one area of the world to define what terrorism is and what is not. It is due to this selective defining power that newspapers around the world went dark after a single atrocity while remaining indifferent to the ongoing massacres of people in Syria, Egypt, Palestine, Iraq and other parts of the world. It is not only the defining power that the aforementioned part of the world has, but all the institutions that are meant to prevail on human dignity and address any crimes committed against humanity are paradoxically located in this part of the world - a part of the world that seemingly spreads democracy as the form of life and governance, but devours it when serving the interest of Muslims.