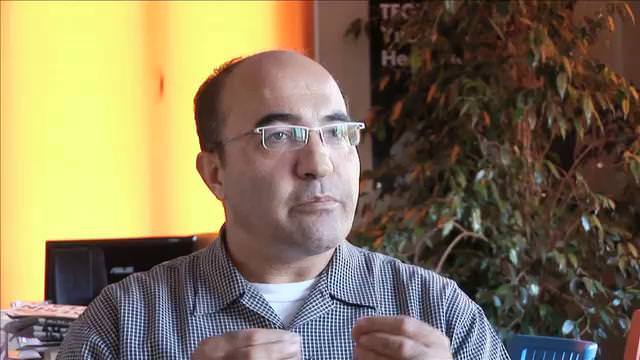 While Armenians fail to distance themselves from an identity defined on genocide, Turks are increasingly able to access all thesis, pro or anti-genocide, and can freely discuss what all relevant issues, says University of Utah’s Professor Hakan Yavuz

Hakan Yavuz is a professor of political science at the University of Utah. His current projects focus on transnational Islamic networks in Central Asia and Turkey; the role of Islam in state-building and nationalism; ethnic cleansing and genocide; and ethno-religious conflict management. Mr. Yavuz answered Daily Sabah's questions.

Daily Sabah: What do you think the Republic of Armenia and Armenian diaspora are doing for the centenary of the 1915 events? Do you think they are effective?

Hakan Yavuz: It depends on what they want to achieve. The main aim of Armenians and pro-Armenian academics is to frame the 1915 events as genocide and to mobilize the international community to recognize it as such. I don't think they have achieved their goal. They only added Bolivia as a new state that recognizes the events as genocide. The number of parliaments that recognize the events as genocide is now 23. Only three countries - Switzerland, France and Slovakia - criminalize the alternative description of the 1915 events as genocide. So, as far as public opinion is concerned, there is some success, but not a great deal. As far as academic publications are concerned, the genocide camp has produced five books for the centenary. However, the major success of the Armenian side has been the mobilization of an anti-Islam mood in Europe and the U.S. for the cause. They succeeded to get the pope to deliver a radical, highly polemic speech to frame the events as the "first modern genocide of the 20th century." This past weekend there was an article in The Guardian by David Olusoga, who titled his piece "Dear Pope Francis, Namibia was the 20th century's first genocide." As Olusoga argues, what we have is that Pope Francis has become a new actor who refuses to see in equivalent terms the destruction and massacres in Africa or Asia that were carried out by Christian imperialist powers. Another area we see some limited success of the genocide camp occurs among the small circle of alienated liberal scholars in Istanbul. Yet this also has rejuvenated a backlash from other groups of scholars who refuse to endorse or justify the argument for genocide. Thanks to democratization in Turkey, today, almost every book, either pro- or anti-genocide in thesis, is published in Turkey and issues are openly discussed. This candid debate is extremely important to test and evaluate some of the arguments of those who support the recognition of genocide.

DS: When did Armenians reframe the events of 1915 as genocide? Would you shed some light on that? Isn't there any other concept to narrate these dramatic events?

HY: The process of defining the events of 1915 as genocide started after 1965. Before then, the 1915 events in Armenian historiography were referred to as deportation (darakrutiun), catastrophe (aghed) and massacre (yeghern). The rapprochement between the Dashnak Party and the Soviet Union post-1965 was crucial. With the help of the Soviet Union, the events of 1915 were presented as genocide and the campaign was unleashed to turn the "terrible Turk" into a "genocidal Turk." Turkey was an important member of NATO and the USSR sought to push Turkey into a defensive position. Moreover, Armenians wanted a new glue for the diaspora to define themselves as Armenian. Genocide was the most effective way to define Armenian identity and keep the separate communities together. Genocide as a new discourse was chosen because it served as a compelling unifying factor among new generations who distanced themselves from the Armenian Apostolic Church as a result of secularization. In other words, the claim of genocide was turned into a church, a religious common ground for the perpetuation of Armenian identity. It is for this reason that calling the 1915 events genocide became a matter of faith. The condition for being considered Armenian was predicated on accepting the 1915 events as genocide. Armenians embraced the concept of genocide as a saving gesture by extremely dramatizing their past and victimizing themselves. As a corollary, some states that want to bully Turkey in the international arena have turned the claims of genocide into an instrument for their foreign policy and have worked to gain some concessions from Turkey.

DS: You say that historical events were made out to be genocide. What is genocide? Is there a discipline called genocide studies?

HY: Yes, now there is an area of study called genocide studies. This is a newly emerging interdisciplinary field. Unfortunately, there is no such field or center that focuses on genocide studies in Turkish universities. Genocide studies are very problematic and they trouble the responsible craft of writing history. Genocide, a legal term that refers to a criminal act, was coined by Raphael Lemkin, who was of Polish origin, and was under the influence of racist and cultural values of his own time. For instance, in an article that was published in the Journal of Genocide Studies in 2005, Dominik Schaller illustrates how Lemkin used racist language for Africans in general, and for the people of Congo in particular. He used the term genocide in his first book, "Axis Rule in Occupied Europe: Laws of Occupation, Analysis of Government, Proposals for Redress," which was published in 1944 as a reflection of atrocities committed against Jews in WWII. Contrary to the claims made by some, there is no mention of Turks, Armenians or Ottomans in that book. Let's recall that in the Perinçek case, Switzerland claimed that Lemkin came up with the concept of genocide because he was inspired by the 1915 events. However, Tal Buenos, who studied Lemkin very closely and worked in Lemkin's archives, demonstrated that the claim made by the Swiss government was unfounded and the government did not repeat this misinformation upon the appeal stage. In his personal correspondence and archives, Lemkin used this concept in a very broad sense and even categorized the atrocities committed by Greeks against Muslims as genocide. In some correspondence in his archives, it appears that he saw the revolutionary reforms made by Mustafa Kemal Atatürk as cultural genocide. He came up with different categories and typologies for genocide, listing 41 different kinds of genocide in modern times in which the Armenian issue appears as the 39th item.

HY: The point when I say the 1915 events are not genocide does not mean that I conveniently forget or ignore the great tragedies and casualties that occurred. Anatolian Armenians experienced great tragedies and we must share their tragedies and say we are sorry. And these actions have already been done. With the protocols and normalization period, a hopeful process had started, but this was aborted by proud Armenian nationalists. We should try to not turn past tragedies into present-day hatred and conflict. Unfortunately, the Republic of Armenia has embraced a racist and nationalist attitude and language concerning the 1915 events, presumably in order to justify the occupation and ethnic cleansing of the Nagorno-Karabakh region. As for your question, I want to say that the 1915 events were a total massacre. There were also mutual massacres. It also means an unintended consequence of a decision for deportation made by a failed and helpless state. These tragedies should not be ethnicized, and they should be seen as collective tragedies.

1915 events were a total massacre, an unintended consequence of a failed and helpless state. These tragedies are collective, should not be ethnicized |Professor Hakan Yavuz, University of Utah

DS: Where are we today? In other words, what is the current status of protocols signed between Armenia and Turkey?

HY: The two protocols signed on Oct. 10, 2009 had several goals such as starting diplomatic relations between Armenia and Turkey, recognizing the current borders and opening them for trade and establishing a commission of historians to study and discuss the 1915 events. These protocols are the Protocol for Enactment of Diplomatic Relations and the Protocol for the Progress of Bilateral Relations. If these two protocols could be realized, the détente between Armenia and Turkey would come into being. However, the Dashnak Party in Armenia and the Armenian diaspora oppose these protocols. At that time, Armenian President Serj Sargsyan visited the major diaspora countries in Lebanon, France and the United States and talked with leaders of the diaspora. He was protested almost everywhere he visited. As a result, these two protocols were sent to the Armenian constitutional court for approval. Yet, the court's opinion on Jan. 12, 2010 interpreted these protocols as being against the goodwill language of the agreements, and stated that Armenia would not give up promoting genocide discourse in the international community. The idea of Great Armenia as stated in the introduction of the Armenian constitution was emphasized as well. As this interpretation by the court was sent to the national parliament for approval, Sargsyan postponed the protocols due to pressure. As a result, Sargsyan withdrew these protocols from the national parliament last February. In 2015, the Armenian government has made some decisions with hostile intentions against Turkey. On Jan. 20, 2015, Sargsyan announced a document titled the Pan-Armenian Declaration on the 100th Anniversary of the Armenian Genocide. In this document there are territorial demands and redresses from Turkey in addition to the demand of recognizing the genocide. In a nutshell, Armenia is a state that occupies 20 percent of Azerbaijani territory and has conducted a forced migration of around 1 million people in this area. In other words, Armenia is making the possibilities of normalized relations with Turkey harder through these aggressive steps. Overall, the Armenian state utilizes genocide discourse to mobilize the Armenian public with nationalist ideology against Azerbaijan to justify its territorial occupation in the Nagorno-Karabakh region and to neutralize international pressures on this issue.

DS: Aren't there any groups in Armenia who oppose these aggressive and hostile policies of the Armenian state?

HY: Of course there are. The most important opposition to this recent declaration came from Armenia's first president, Levon Ter-Petrosyan, who was in office from 1991-1998. He said that these policies would weaken the chances of reconciliation with Turkey, increase poverty in Armenia and push Turkey for more pro-Azerbaijani policies. The population of Armenia is 3 million. Poverty is massive. The state is in the hands of oligarchs who are mostly dependent on Russia. There is a Russian military base in Armenia and Russians always boost fear-inducing scenarios for Armenians to keep their influence intact.

DS: What should Turkey do?

HY: Turkey is presently being subjected to a pre-planned attempt to provoke an emotional response that can then be magnified in the press by Armenian nationalists. First, all Turkish officials should be reading strictly from one script in response, and it should never become a football for domestic politics. The claims and charges should not be treated as being hugely significant. Responses must never be emotional or angry and nor should they threaten retaliation. Instead, they should be labeled as one sided and not taking into account the suffering of Ottoman Muslims in the Balkans and Caucasus who were subjected to a systematic program of ethnic cleansing from Serbia and Greece at the beginning of the 19th century and continuing to the Caucasus in 1858 and the Balkan Wars of 1911-12. Turkey should respond to specific countries that want official Turkish recognition of genocide against Armenians by saying that France, the U.S., Britain and the Vatican would have credibility only when they also officially acknowledge genocidal onslaughts linked to their countries in Algeria, Croatian-occupied Bosnia, Tasmania, North America, Vietnam, Central America and Iraq, respectively. Their collective failure to do so means that they lack the proper credibility to interrogate Turkey on the matter.