Turkey, Kurds and ISIS: Who is fighting whom? 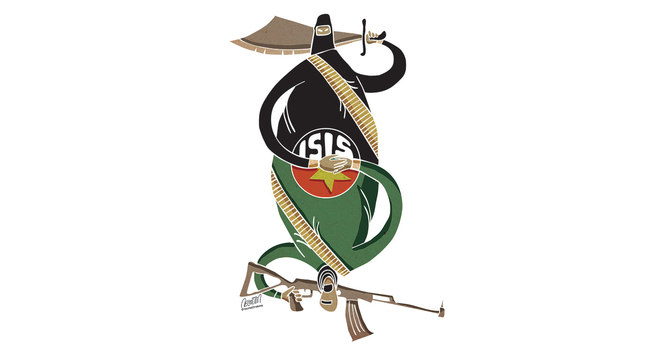 As Turkey finally comes off the fence and decides to take part in the ongoing collective fight against ISIS more actively, its decision to suspend the reconciliation process and open a simultaneous front against the PKK has costly ramifications

For many, the deadly Islamic State of Iraq and al-Sham (ISIS) bombing of the Kurdish town of Suruç in Turkey was a long-delayed wake-up call for Turkey. Thirty-two students were killed and over 100 injured in the suicide attack that sparked public outrage. Directly or indirectly, Turkey was already a key player in the Syrian civil war. However, this week spelled a new phase in Turkey's policy on ISIS and one that will have large ramifications in Syria and also Turkey.

Turkey largely employed a "no peace, no war" stance on ISIS, and such a standpoint was influenced by the increasing autonomy of the Syrian Kurds who have been pitched in deadly battles against ISIS forces. For the Turkish government, the threat of the Democratic Union party (PYD) and its military wing, the People's Protection Units (YPG), was also of a concern than an ISIS that effectively contained Kurdish ambitions. As Turkey enters a new phase against ISIS with a series of airstrikes with the agreement for the U.S.-led coalition to use the İncirlik Air Base and also the provision of a buffer zone that Ankara has so fiercely insisted, these events have long been in motion, but the bombing in Suruç was the final catalyst.

ISIS, which was already feeling the heat from a Turkish crackdown and the onset of tighter security measures, something that the U.S. has long insisted that Turkey was not doing enough of, sent a number of messages with the recent bombing in Suruç. The tragic death of so many Kurdish youths stoked the fire among many Kurds who were already skeptical of Turkey's Syrian stance, which they deemed as being designed to undermine the Kurds. The anger and protests that erupted was a clear message that many felt that Ankara had brought this on them with months of dithering owing to their much deeper anxiety regarding a de-facto Kurdish state developing on their southern border. The bombing in Suruç by an ethnic Kurd was orchestrated in order to warn the Kurds that ISIS ideology appeals to deeper than ethnic lines that the Kurds had used so well in their defense of Kobani and other Kurdish towns in Syria. It also stirred debate among some locals of who are the protectors of the Kurds, Ankara or the PKK?This very point was exposed as the PKK retaliated with revenge killings of police officers. ISIS aimed to relieve the heat on the Syrian battlefronts with the YPG by shifting focus further north.

Turkey has always maintained that they see no difference between ISIS and the PKK, and there is no doubt that the PKK and Syrian Kurdish ambitions were at the forefront of the "package" agreed on between Ankara and Washington that has led to the new Turkish attitude. Foreign Minister Mevlüt Çavuşoğlu said that safe zones would "form naturally" once the areas under ISIS control were cleared. This is firstly against ISIS, and secondly against any YPG expansion west of Jarablus, which Ankara has openly dreaded. Turkish involvement deeper in Syria will certainly focus on keeping Syrian Kurdish ambitions in check, but this leads to a series of deadly double games that may ultimately backfire. The cease-fire with the PKK has been shaky to say the least, but in spite of increasing skirmishes over the past several months it has remained intact. As Turkey launched a series of airstrikes on PKK strongholds in northern Iraq, the door was swung firmly open to a new dawn of confrontation.

Turkey has responded with a strong message to PKK attacks in recent days in conjunction with its attacks on ISIS positions to keep true to its word that it does not see any difference between the two groups. However, this is a dangerous game that could spectacularly backfire. ISIS has kept a largely neutral view of Turkey, but this has long vanished. After hundreds of arrests and now airstrikes, the building of concrete walls along its border and allowing the U.S.-led coalition to use Turkish military bases, Turkey has finally come off the fence in the fight against ISIS with all the repercussions this will now bring.

But simultaneously opening a second front against the PKK is under question. After decades of violence, thousands of deaths and great animosity, a return to the dark days of the past will lead to a new and unprecedented polarization of Turkey. The Kurdish question in the Middle East has moved on a great deal since the harrowing days of conflict in the 1990s. The reconciliation process was a bold and welcome step by Erdoğan in 2012. And only lasting peace in Turkey can ever be the way forward.

Reform packages and greater rights for the Kurds in any new constitution should not be tied to their PKK dilemma. Not all Kurds are PKK sympathizers and many Kurds become trapped between alienation, harsh government policies and the PKK. Turkey can continue cutting branches, but without addressing the root of the problem the vicious PKK-Ankara struggle will continue for more decades with more bloodshed. This is also true for the Syrian Kurds. How about the dozen or so other Kurdish political parties? Kurdish autonomy in Syria is unlikely to reverse and Turkey must adjust to this new reality. Any confrontation with the YPD or continued Turkish policy against Syrian Kurds will simply turn greater Kurdish sentiment across the divide against Turkey.

Immediately after the Turkish attacks on the PKK, the White House urged the continuation of the reconciliation process and a de-escalation of violence, but also stressed Turkey's right to self-defense. But the situation becomes more complicated when the most effective fighting force in Syria against ISIS are indeed the YPG. The U.S. continues to list the PKK as a terrorist organization, and yet ironically enjoys increasing strategic ties with the YPG. Seldom does such a precarious web of inter-relations remain intact for long. Turkey is at war with ISIS and the PKK, the PKK is at war with ISIS and Turkey, the U.S. is at war with ISIS and is helped by the PKK, Turkey is helping the U.S. fight ISIS, the PKK are helping Kurdish forces in the Iraqi Kurdistan, Turkey is enjoying good relations with the Kurdistan Regional Government. The complex map is riddled with ironies and contradictions and the scene is set for greater fallouts and casualties in these relations.