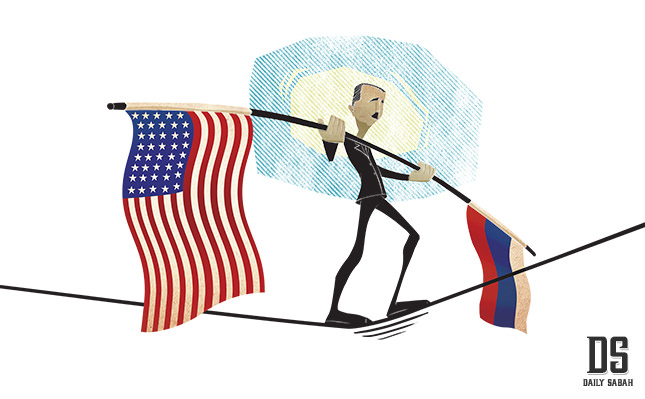 Traces of the Cold War can be seen in Syria's civil war. Putin's military support for the Assad regime and the Obama administration's wish for its removal bring the two powers to the brink of a new conflict

Obama's dithering in Syria has given the victory to Russia, with Assad now looking like a smart player. So will the Americans now give al-Nusra even more weapons?

During these times of Iran being brought in from the cold and the geopolitical plates of the Middle East shifting all the time, we should be wary of news which packaged by super powers based on perceived truths. Or in other words, the "manufactured consent" that the American academic and author Noam Chomsky explains, which amounts to super powers feeding media with fake news, is taking over our screens the further Western media outlets plunge into financial crisis and becomes dependent on whatever they can be given in their pitiful bid to scramble a defense against social media - a bastion of angry people, with unsubstantiated news based on Chinese whispers and disinformation.

But enough about the Syrian Observatory of Human Rights.

MEDIA AS A FACTORY

Over the weekend, a number of leading international TV news networks ran a story that Washington was shocked to discover, that the U.S.-made weapons and equipment that had been supplied to moderate rebels in Syria had been handed over to the al-Qaida affiliate there, al-Nusra Front.

Yet the reports are a damning indictment of how poor conventional media is these days with almost no editorial merit and also how tired international media is when it comes to reporting on the Syrian war.

They are also a shameful example of fake news designed to throw a loose veil over much bigger events that are taking place on the ground in Syria.

Pundits who follow which groups are doing what to one another know only too well that first the U.S.-backed rebel groups - there are about a dozen on Washington's approved list - lose battles all the time. And in war, when you lose a battle, invariably the military hardware you possess is relieved of you on the spot. They also know that the report of the six pickup trucks being handed over to al-Nusra Front is anything but news. Al-Nusra Front wins battles and the spoils of war are apparent. What is worrying is not that the blurred lines between these various groups in Syria are getting even more blurred, but that few, if anyone, seems to care anymore. Not even Washington, whose antics in the region are now about to withdraw further from the fold.

It is worth pointing out that the lines between so-called moderate groups and those aligned with al-Qaida are still blurred and the U.S. initiative of arming the "Dirty Dozen" could backfire, similar to blunders made in the early days of the Iraq campaign in 2003.

Arming or choosing not to arm a certain group can be a game changer on the sectarian battlefield in the Middle East.

As I have commented on earlier in the year, there is a large number of so-called experts in the U.S. who fervently believe that U.S. President Barack Obama is indirectly arming al-Qaida-affiliated groups with U.S.-made weapons, which often make it to mainstream media and cause a haw and cry when evidence of this surfaces.

Certainly the recent report over the weekend of the pickup trucks is anything but new.

What is emerging now is a new dynamic on the ground in Syria following Russian President Vladimir Putin's recent actions to send troops, tanks, planes and ammunition to Syria. Just a matter of weeks earlier, the U.S. cut a deal with Ankara to establish a no-fly zone, using İncirlik Air Base to conduct strikes in northern Syria, which Turkey has largely carried out on PKK units, much to the chagrin of international media, which indulges itself by claiming that the Islamic State of Iraq and al-Sham (ISIS) is an ally of Turkey.But Russia has been stirred by this move as Moscow has probably assumed that as part of the deal, Washington has assured Turkey what the priority is in northern Syria, and it is not crushing ISIS.

Even the Americans cannot keep up this charade much longer by pretending that the main focus is defeating ISIS, when it is apparent that Obama is still obsessing over the removal of Syrian President Bashar Assad.

And here lies the real heart of the matter that did not make it to TV screens over the weekend. How Obama and Putin are squaring up against each other over Syria, as America has lost its mojo and can no longer claim to be a leading player, leaving Putin to come in and reinforce Assad's position as a longer term incumbent.Russia's expanding military intervention in Syria has the potential to change the course of the war, playing straight into Assad's hands, leaving U.S. policies aimed at securing his exit in tatters, and possibly even cranking up the stakes in the four-year conflict.

It is largely about the U.S.'s move with Turkey, but also that Assad's own regime forces are at a breaking point as a number of opposition fighters have made a number of small but significant gains in recent months.

But Putin is showing all the players that he's able to man up when it is required, making Obama look weak at best. Few know the real plan on the ground though, but whatever the Russians succeed in doing, it throws up a number of terribly tricky questions to answer for the Obama administration. If Russian troops succeed in crushing ISIS, then this only strengthens Assad's hand, but it also puts Turkey in a difficult position, as removing ISIS also boosts the potency of Kurdish fighters hell bent on securing an autonomous state even if it means removing the knife from the sheath. The political ramifications in the U.S. for Obama if the Russians succeed in defeating ISIS could be huge. His critics might even go so far as to claim that the U.S. intervention in Syria was never serious about fighting ISIS, to which the five moderate soldiers that the U,S, trained bears witness.

THE WORSE THE LONGER

Assad has always been and will always remain the target, that much is clear.

What is less clear is exactly what Russia intends to do with its rapidly growing deployment of troops, tanks and combat aircraft on Syria's northern coast, which is difficult to discern, according to military experts and U.S. officials who say they were not consulted on the Russian moves and were caught off guard by the intervention.

Being surprised by the move is not a surprise though. U.S. policy in the region has been muddled at best and confusing at worst. The let's sit and wait doctrine has finally waned and now many experts are predicting that the war could end in Syria with the Russians taking a leading role, supported and protected by Iranian-led and Hezbollah brigades. With Iran and Russia now both firmly committed and installed into the war machine, Assad is no longer looking like a survivor against all odds, despite being surrounded by a shattered country with an economy in ruins.

He is now starting to look like a winner.

But the Hollywood script is not yet complete. If irony were a required commodity, the big studios would find it in ample supply. It is a hardly ever reported point about al-Nusra Front and one that has been kept far from the beaks of the press room wasters in Washington and Brussels, but the al-Qaida group is one of the few brigades that habitually hits Assad regime forces hard and has chalked up notable successes.

Is it possible that just now as the Russians have entered the fold, that media advisors to Obama have suddenly woken up and said that they now need to distance themselves from al-Nusra now since the weekend's pickup trucks story?
Last Update: Sep 29, 2015 3:51 pm
RELATED TOPICS