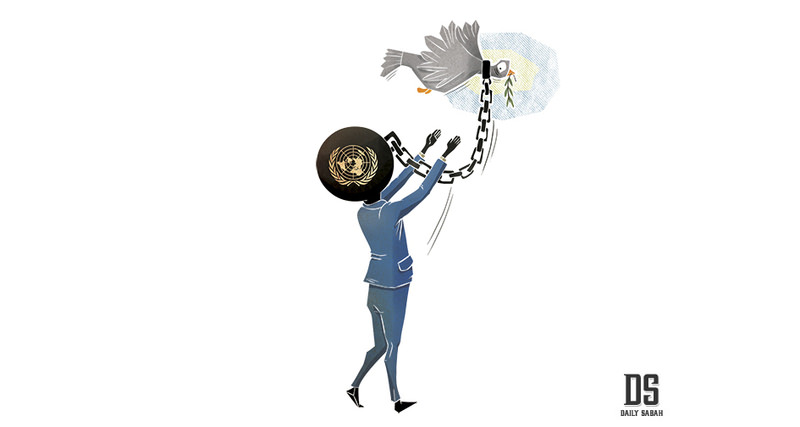 The U.N.'s doctrines sound good in theory, but are not carried out in practice. U.N. member countries forget the organization's responsibility to protect agreed to by many of them to take action to protect, establish order and rebuild in cases like the Syrian civil war

After five years the civil war in Syria seems to have begun drawing the attention of the world a little more. It is not realistic to expect this to work a miracle right away. Sadly however, those rich and powerful countries that can change the balances are painfully slow to react to atrocities in faraway lands. For this to happen either national interests in the related region must be at risk or threats must extend beyond borders and assume a global dimension.

Fortunately, there are strong civil societies in civilized and rich countries. The heart-wrenching dead body of Aylan Kurdi, which washed ashore on a beach in the holiday paradise city of Bodrum in southwestern Turkey, shook the West. Hence, the public mobilized to pressure their governments to take action on this issue. However, tens of thousands of babies and children like Kurdi have been brutally killed in Syria, Iraq, Gaza and Rakhine State in Myanmar for the past five years. Unfortunately, the public's conscience is like a giant transatlantic ship that is slow to move.

Of course, it is an exaggeration to say that the latest activity results from the heart-wrenching photograph of Kurdi. What worries Europe is the flood of hundreds of thousands of Syrian and other Middle Eastern refugees into continental Europe. The events taking place in Hungary and Austria appear to have made Europe begin taking Turkey's long-standing warnings seriously. We have repeatedly argued that with Turkey left alone shouldered a heavy burden for five years due to the war along its 911 kilometer border with Syria, the Middle East would be effectively brought into Europe. Turkey has served as a safety valve for Europe, so to speak, admitting 2.3 million refugees and hosting them in civilized conditions. It was clear, however, that the situation could not be sustained for long.

ETHICS? WHAT IS ETHICS?

Yet, apart from watching Turkey bear this heavy burden alone, an effort to put pressure on the government was launched in an utterly unethical way through the claim that Turkey supports the Islamic State of Iraq and al-Sham (ISIS). However, Turkey included ISIS on its list of terrorist organizations before Europe and the U.S. and has been attacked by ISIS many times. ISIS has even gone so far as to declare President Recep Tayyip Erdoğan a heretic, an infidel deserving of death.

Despite all this, Turkey has wasted its energy since mid-2013 trying to make it understood that it does not support ISIS. Perhaps it was a deliberate effort because Turkey was awaiting three consecutive elections at the time. The propaganda intended to associate Turkey with ISIS was jointly conducted by some prestigious and influential Western newspapers, pro-PKK media and the anti-Justice and Development Party (AK Party) alliance within the country, with virtually similar arguments. Maybe they calculated that this propaganda would affect the election results and alienate Kurds from the AK Party. Indeed, this strategy brought partial success in the June 7 elections.

But at what cost?

The president is still in office and the AK Party recovered itself after a brief shock. This tactic basically amounted to shooting themselves in the foot, as it was forgotten that Turkey, and especially an Islamist-leaning government that is committed to Western values, is an invaluable partner at the critical juncture the Middle East currently finds itself in. I hope this will be kept in mind.

Prime Minister Ahmet Davutoğlu devoted a large part of his speech at the U.N. General Assembly to the Syrian civil war. Citing that the number of people fleeing from attacks by Syrian leader Bashar Assad's regime and ISIS has exceeded 5 million, Davutoğlu said: "The international community must act swiftly and create a safe zone."

Saying that ISIS was born out of the security vacuum in Syria, Davutoğlu commented on the Assad regime and Syria:

"Anyone thinking of a solution to the Syrian crisis must think of a Syria without Assad. The world must know that a diplomatic solution to this crisis must be based on a transition that leads to political change. We will never succeed until Assad leaves power. In a new Syria there should be no place for either Assad or ISIS. Turkey has fought all kinds of terrorism. Terrorism cannot have legitimacy. This is equally true for both ISIS and the PKK."

These succinct statements reveal the essence of the issue perfectly. As Davutoğlu said, a terrorist group cannot be an alternative to another terrorist group. This method has been tried but brought about disastrous consequences even under the conditions of the 20th century. Besides, these conditions are not there anymore. In a world that has undergone globalization and a technological revolution, operations of terrorist groups do not remain confined to unfortunate countries like Syria and Afghanistan. Moreover, as exemplified by ISIS, they have the capacity to act like a state.

In the Syrian civil war, too, the problem can only be solved at its source. The West is confused about the ideological differentiations regarding ISIS, Assad, the PKK and the Democratic Union Party (PYD) in Syria. Secular terrorist groups and tyrants are preferred over groups like ISIS and al-Qaida-linked al-Nusra Front. This is obviously irrational. These are destructive organizations that mutually strengthen and sustain each other.

However, these valid remarks do not make up for the most needed but still missing element necessary to simultaneously solve the problems in Syria caused by Assad and ISIS. There is no ground force to fight ISIS. As it becomes clear that the U.S.-led coalition airstrikes, which Russia is also conducting on its own now, cannot solve the problem alone, a tyrant like Assad and terrorist groups like the PYD and PKK come to be seen as allies to make up for this lack.

At this point, we remember the raison d'etre of the U.N. and get disappointed. The U.N.'s main mission is to preserve world peace, step in when risky situations arise and intimidate tyrants and dictators in the case of mass atrocities. While it was already evident that this is no easy task, the flawed structure of the U.N. and its being hostage to political and strategic choices of the permanent members of the U.N. Security Council (UNSC) have hampered this role.

Erdoğan was trying to make this understood by saying: "The world is bigger than five," referring to the five permanent members of the UNSC.

Moreover, the U.N. is prepared to assume such a role. The Responsibility to Protect (R2P) Doctrine is a concept that was created to be applied to cases just like Syria, and was endorsed by many U.N. member countries. The R2P allows the U.N. to take action in three stages when a country fails to protect its own people due to natural disasters, political circumstances or attacks. The U.N. could not yet put this mission, which can be summed up as protecting, establishing order and rebuilding, into action in Syria. The reasons for this are obvious - the unwillingness of the U.S. and UNSC vetoes from Russia and China.

But what if the Syrian civil war evolves into World War III, Europe is flooded by millions more refugees and ISIS terror turns into a domestic problem for Europe and the U.S.?

One needs to be blind not to see that the issue is evolving toward this point. In this regard, even if Syria and Syrians do not have any value, Western countries should take serious steps to solve this problem in Syria for the sake of their own interests.

When trying to do this, it would be a critically strategic change to support Turkey to the end instead of doing it an injustice.
Last Update: Oct 06, 2015 2:04 am