Turkey through the colonial lens of The Economist and facts 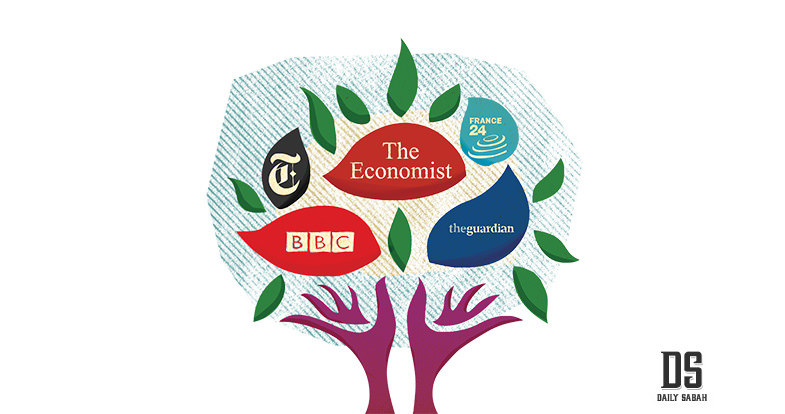 We see the media involved in serious perception engineering today concerning journalism and act of informing. Media are under pressure in the East due to the lack of democracy. But journalists in the democratic West have to work under more insidious pressures, while serving as the extension of lobbies or political parties

Just days ahead of Turkey's general elections, The Economist published an editorial openly calling on the Turkish electorate to vote against the Justice and Development Party (AK Party).

There would be no problem about it if the content of the piece did not contain so many errors and subjectivity. The issue of how common it is to call on the electorate of another country is a matter of a different debate. As a member of Parliament with a background in journalism, who continues to write columns, I believe it is a democratic right and even a necessity for the press to take an openly political stance. Politics is a powerful instrument pervading every aspect of life. Columnists and the media especially are heavily involved in politics. The media also fulfills a control function as the fifth power.

However, that control function of media and intellectuals is totally different from perception engineering. Sadly, we see the media involved in serious perception engineering today, under the veneer of journalism and act of informing. Media and media employees are under pressure in the East due to the lack of democracy. But journalists in the democratic West have to work under more insidious pressures, while serving as the extension of lobbies or political parties.

A newspaper can certainly call on voters to vote against the Justice and Development Party (AK Party). But it has to bring up really solid and objective proof, as it takes such an explicit stance, binding the newspaper's brand and its employees, and further, all its readers. Since we expect consistent criticism based on sound arguments from even political parties, which solicit votes for themselves and which are a direct side to the elections, it is much more necessary for third parties to be more careful on this matter.

The Economist's piece is titled "Sultan at bay." The magazine has previously featured President Recep Tayyip Erdoğan on its cover with the headline "Sultan or Democrat?" comparing him to Sultan Selim III, who had been dethroned and strangled. It was an apt coincidence this cover came at a time when the opposition bloc in Turkey was frequently threatening Erdoğan with, "You will end up like Saddam or Gadhafi." In Turkey, where The Economist claims in its contradiction-ridden editorial that the media faces pressures, the first four of the five top selling newspapers commit hate crime against Erdoğan, including his family, on almost a daily basis. Yes, three quarters of the media, which publish such serious libel, insults and calumnies that wouldn't be allowed in either the U.K. or the U.S., belong to the opposition bloc not to the government. Almost three quarters of hundreds of columnists who write every day go beyond legitimate criticism and publish pieces consisting mostly of libel and hate speech. And these people don't face any pressure.

By choosing the epithet "sultan," The Economist essentially reveals that it sees Turkey through a colonial lens. It strongly urges the electorate to vote against the beleaguered sultan.

Of course, this sudden change of attitude toward Erdoğan needs to be explained or justified, because until 2009, and even 2011, they used to praise to the skies Erdoğan and the AK Party. This was done by not only the foreign press but also the so-called liberal and secularist intellectuals at home, who rubbed elbows with the former. I can cite numerous pieces by some of them – Ahmet Altan, Cengiz Çandar or Hasan Cemal – who praised Erdoğan quite euphorically and (over)generously. There is a jointly-produced and magic sentence for this. It is what The Economist used at the end of the editorial: "Yes, Erdoğan has introduced numerous democratic reforms in Turkey and modernized the economy. But after over a decade in power, this wonderful, perfect man has suddenly changed, became merciless and turned into a dictator/sultan whom no one should vote for or support, and who should be even toppled."

At this point, it is seen that a very essentialist and discriminatory approach is used to cover up some nonsense. In fact, The Economist tries to trigger the colonial bias toward the East, which it presumes is shared by its Western audience, and to inject us secretly with the assumption that the easterner is an evil being that may turn into a scoundrel at any moment. The West values rationality and takes pains to be objective. Naturally, it cannot accept the claim that a man may take a sudden U-turn after having democratized the country for a decade, ending the denial of Kurdish, Armenian and Alevi identities and improving the economy beyond belief for all Turkish citizens, without excluding any segment of the society. For this reason, along with many errors of fact, the hint that the person in question is not a Westerner, that Easterners come from a different ontology than Westerners, and that such a change is normal for the East. For the colonial perception of the East, this remains a prevalent and distorted perception.

Interestingly, the claims raised by The Economist and slogans produced by "intellectuals" or "columnists" in Turkey, most of whom have already become discredited and are employed by the parallel structure (i.e., the Gülen Movement), are similar to a large extent. One of them is the propaganda that the AK Party has resumed the war with the PKK for no reason, after suffering a decrease in its vote share in the June 7 elections. The Economist has just presented this blatant lie as truth. This is one of the main arguments of the Peoples' Democratic Party (HDP), and the media outlets of the Doğan Group and the Gülenists. That distorted view amounts to saying that Kurdish voters who have switched from the AK Party to the HDP are pro-PKK. It also hides the fact that the PKK has long tried to abort the reconciliation process. In a statement following the elections in June, Murat Karayılan, a senior PKK commander, said they had actually prepared to wage an ultimate war on Turkey as the reconciliation process began with a declaration on Jan. 3, 2013, but that they couldn't "say no" to Abdullah Öcalan, and that they regret this decision. The PKK has never kept its promise to withdraw its militants out of Turkey, which it announced on May 8, 2013, but on the contrary, it has continued its efforts toward arming and establishing itself in cities. The HDP nominated Co-Chair Selahattin Demirtaş during the 2014 presidential elections and managed to get nearly 10 percent of the vote thanks to normalization in the country, which was achieved through Erdoğan's efforts.

Only two months after this political success, a rehearsal for revolt took place after calls by the PKK and Demirtaş, and the country turned into a battleground. More than 50 Kurdish citizens were brutally killed. Actually, the reconciliation process has effectively come to an end or should have ended then. But the government tried to save the process with a last-ditch effort. When the HDP scored another success in the general elections, this time garnering 13 percent of the vote, the PKK took action. In Ceylanpınar district, two policemen were shot in the neck by PKK militants while sleeping. People started being killed in front of their family members. It was obvious that the PKK has launched a drive to create cantons by taking advantage of the power vacuum. On the other hand, the HDP has pursued a malevolent policy by blocking Parliament. In this process, instead of the HDP becoming stronger and the PKK falling off the agenda, the HDP has come closer to the PKK and guns came to dominate politics. Those people in the country who look forward to seeing Erdoğan gone at any cost harbored sympathies for the PKK.

The targeting of Erdoğan is not related with these. Erdoğan is in a serious struggle to make Turkey a leading country. Those who could destroy the Ottoman Empire in three centuries and established a poor replica of which they controlled for a long time, are averse to the idea of Turkey being independent. This is also natural; what's not natural is the mocking of our intelligence so much and believing that it will be accepted. However, destabilizing a Turkey that has consolidated domestic peace and democracy in accordance with universal and authentic values may serve the interest of some lobbies but not of Europe.